Lugano
Where to go
Near by
Airports
Inviting city in the Canton of Ticino
The city of Lugano, the most important of the Canton of Ticino, sits in a splendid position, overlooking the lake and surrounded by mountains. The lake, now known as Lake Lugano, was once known as Lake Ceresio, which according to ancient Latin-derived place names means ‘bluer than the sky’, but according to others of Celtic origin means ‘branched’, and it seems that the lake fulfils both these features. 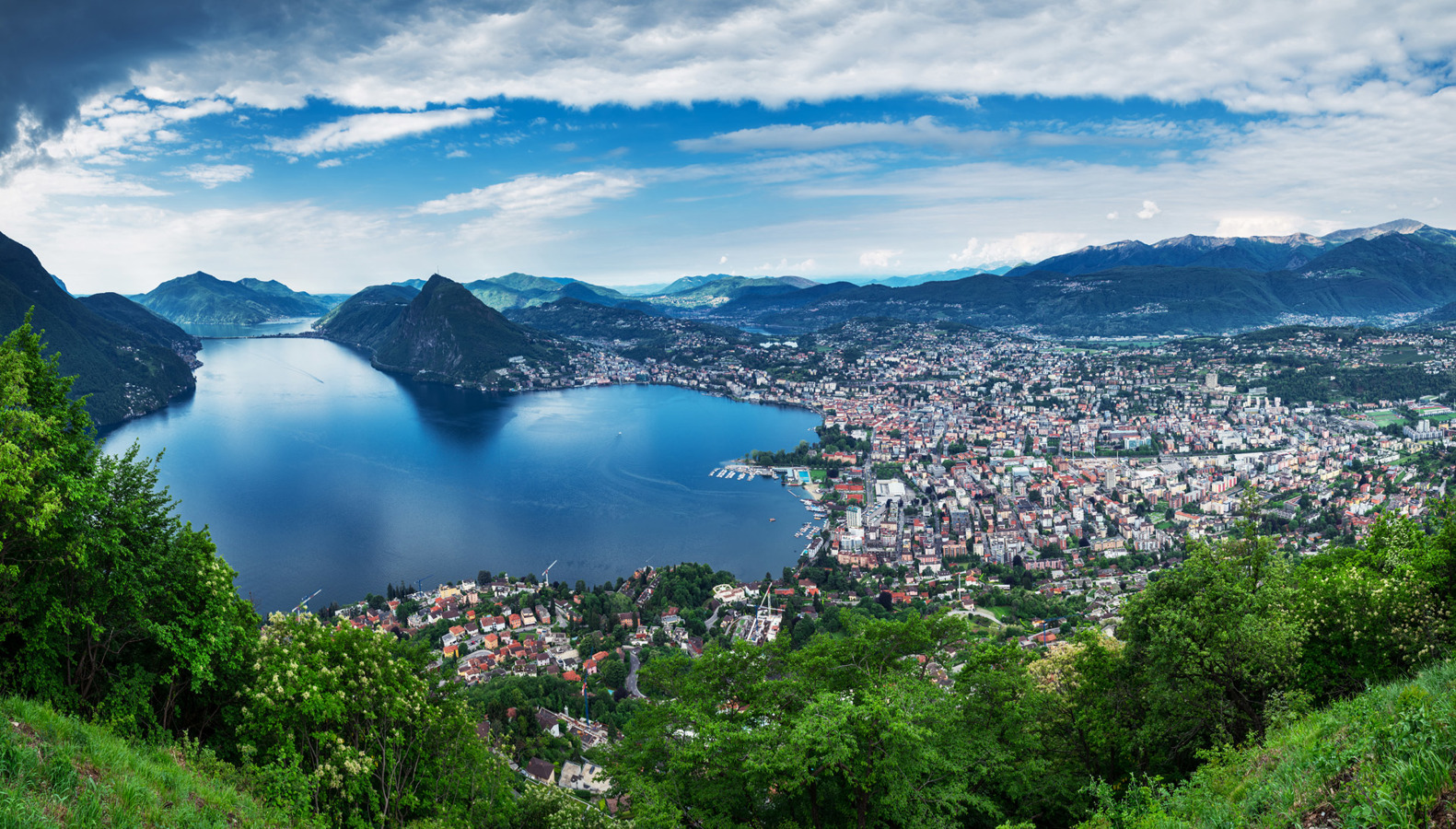 Lugano. Panoramic view of Lake Lugano from Brè Mountain. Copyright © Sisterscom.com / Shutterstock
Lugano is not just a summer destination due to the various sports that can be practised on the lake, but, thanks to its mild climate, it also attracts thousands of visitors throughout the year to take part in the numerous social and cultural events. Almost daily, the city offers free open-air concerts and is also the location of the Lugano Festival, the Blues to Bop Festival, an ‘open-air’ theatre and the fantastic Autumn Festival, which celebrates the end of summer with autumn colours and flavours, and various culinary delights made with local produce.
Lugano, a crossroads between the European cultures of North and South, has absorbed the features of both areas, and this aspect is seen in the architecture, traditions, and even the food.
The old town centre
The old town centre, fully pedestrianised, is the jewel in the crown of the city. Along the lakeshore, Via Nassa (which takes its name from a fishing tool, a sport that is very popular on the lake) is the most elegant street with long porticoes that give it an Italian appearance and make it a temptation for shoppers, with stores selling craft products, designer wear and a large assortment of local food. 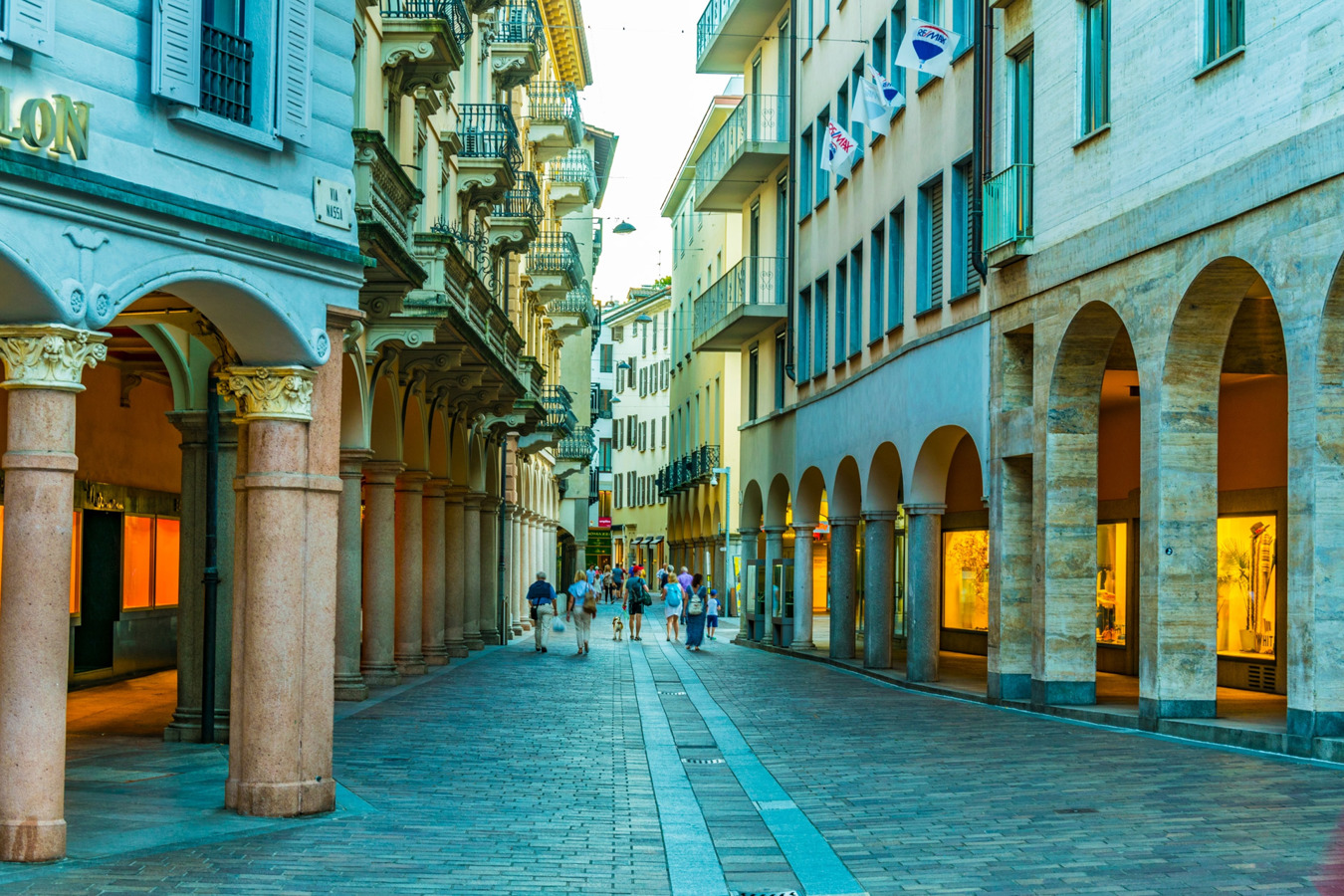 Lugano. The historic centre. Copyright © Sisterscom.com / trabantos / Shutterstock
Piazza Ciòccaro is the main square and the liveliest, with the beautiful Palazzo Riva in Baroque style; from here a steep road climbs to San Lorenzo Cathedral, built in the Romanesque period and restored in Renaissance style. Inside there is the beautiful chapel of Santa Maria delle Grazie, constructed in the fifteenth century in gratitude to the Madonna for having stopped the plague. 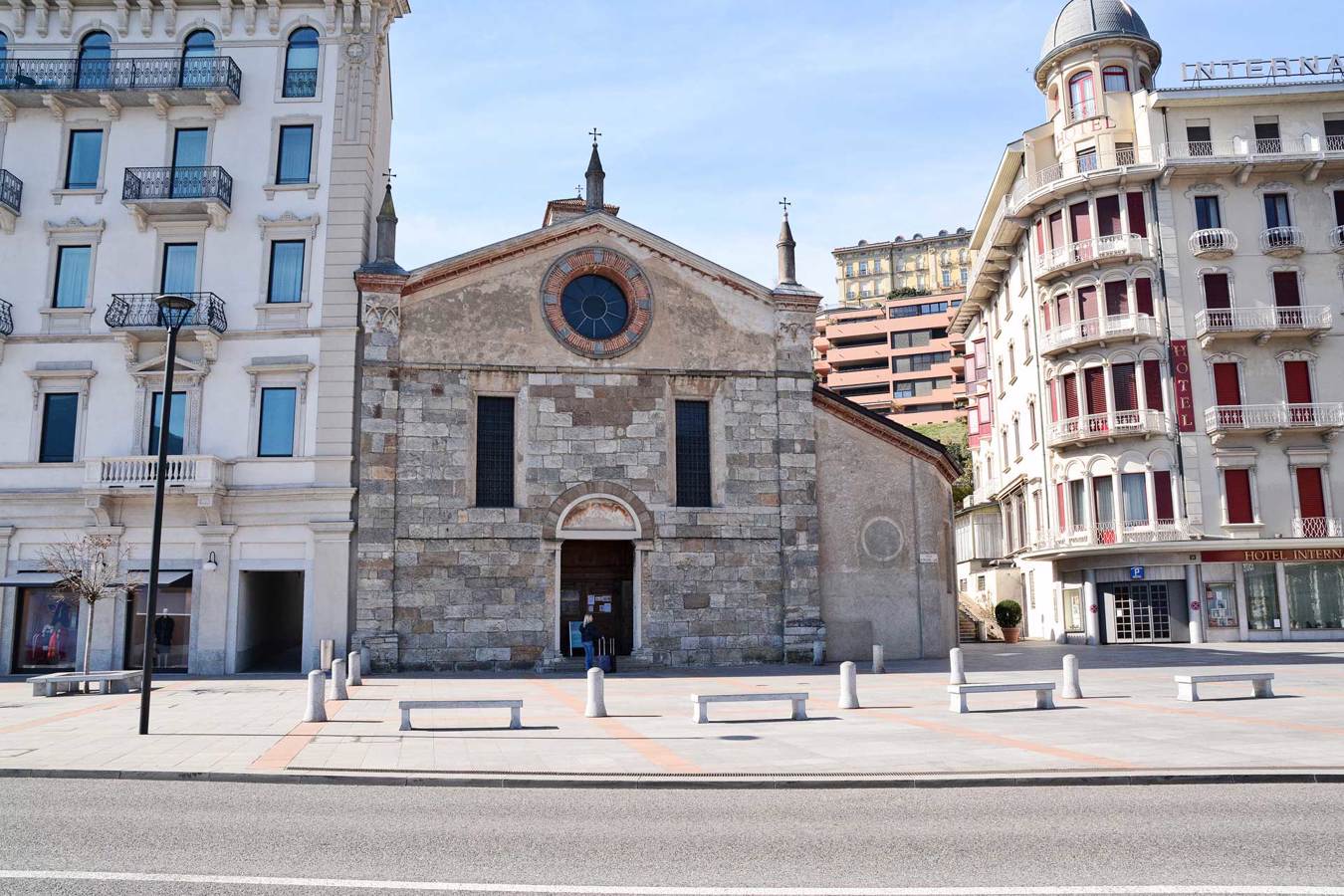 Lugano. Church of Santa Maria degli Angioli. Copyright © Sisterscom.com / Fabio Caironi / Shutterstock
From an artistic point of view, however, the most important church is without doubt Santa Maria degli Angioli, which houses the works of Bernardino Luini, beloved disciple of Leonardo da Vinci, including a Last Supper, strongly influenced by the great Tuscan Master, and a Crucifixion of Christ, the largest fresco ever created in Switzerland.
The museums
Lugano has a large number of museums, including one of note, the LAC, acronym for Lugano Arte e Cultura, which is situated in a futuristic building near the lake and houses the Art Museum where temporary exhibitions of the greatest twentieth century artists, such as Munch, Modigliani and Chagall, are rotated continuously. 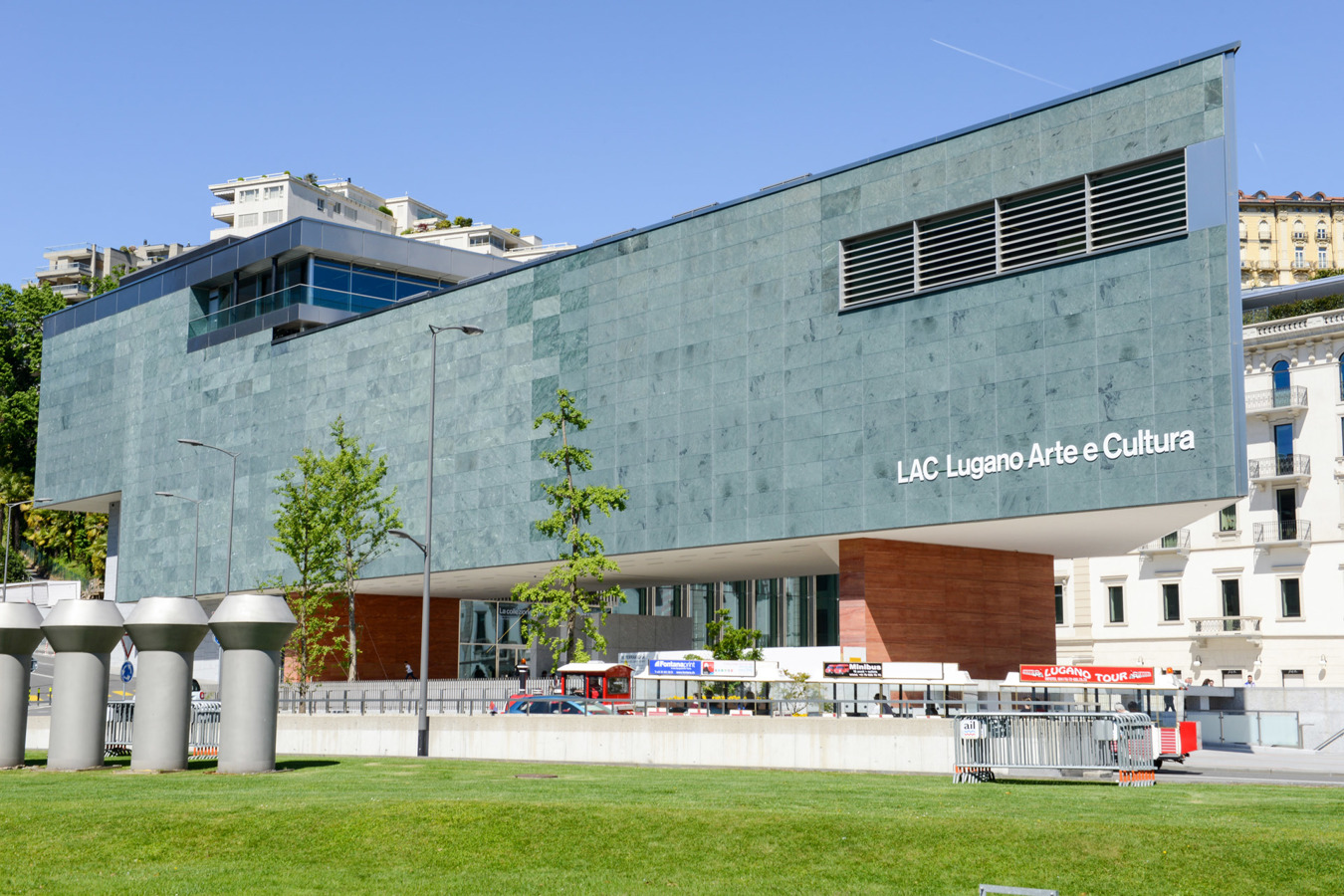 Lugano. LAC Museum. Copyright © Sisterscom.com / Stefano Ember / Shutterstock
The Culture Museum at Villa Heleneum houses unique collections of primitive art from all over the world, from Oceania to Africa and Asia. The Natural History Museum presents a documented story of the aspects that make up the natural components of Ticino, and is a guide to a better understanding of the countryside of the area. 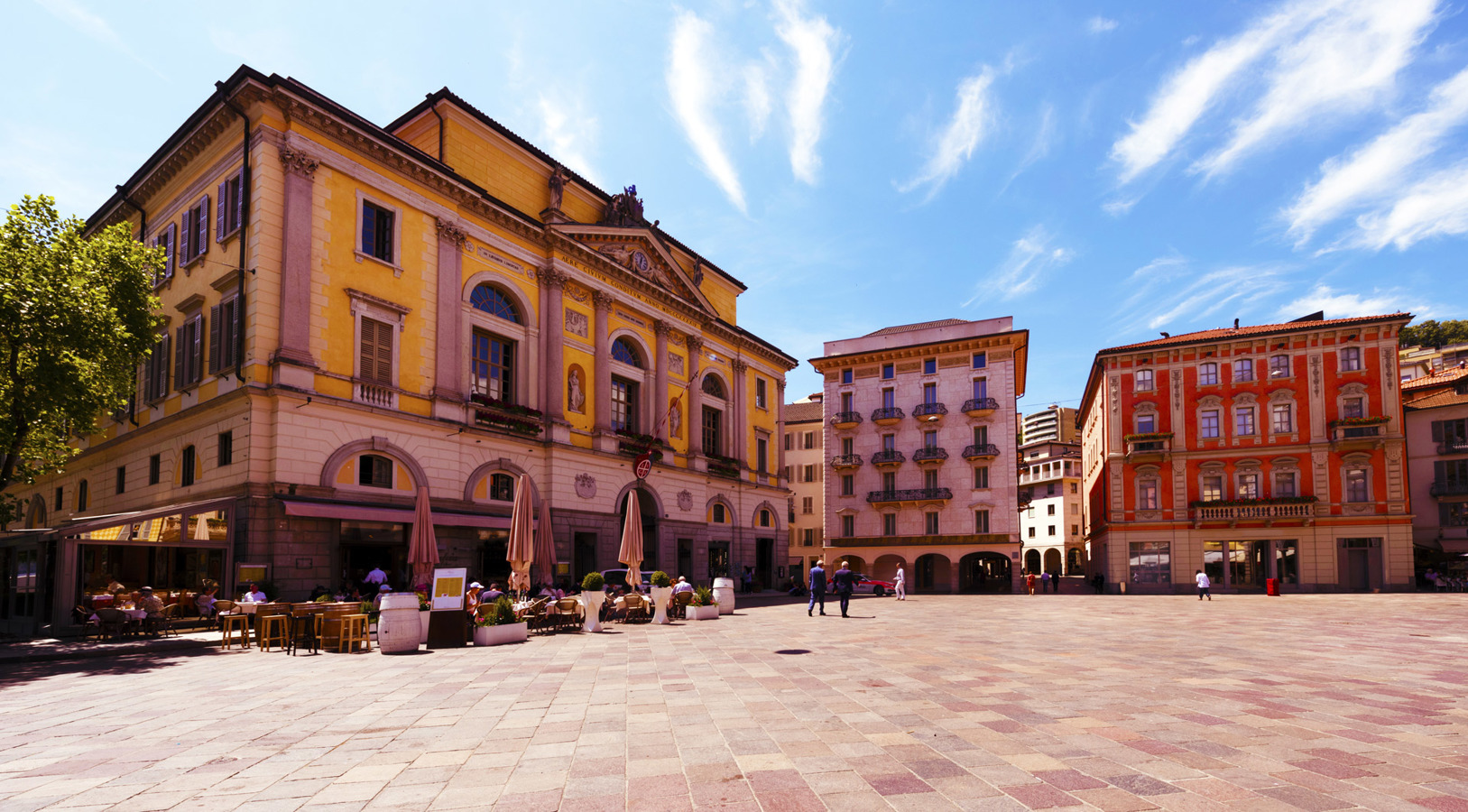 Lugano. The Town Hall in Piazza della Riforma. Copyright © Sisterscom.com / Shutterstock
The beautiful Neoclassical Town Hall stands in Piazza della Riforma, the city’s gathering place, where, every Tuesday and Friday, the flower, fruit and vegetable market takes place.
Lugano is, however, not only rich in museums and cultural events, but is also a starting point for various trips, which lead along paths in the middle of forests to exquisite outlying areas, such as Gandria, Morcote, which has one of the most beautiful parks in Switzerland, the Scherrer, with abundant subtropical flora, and picturesque fishermen’s villages. 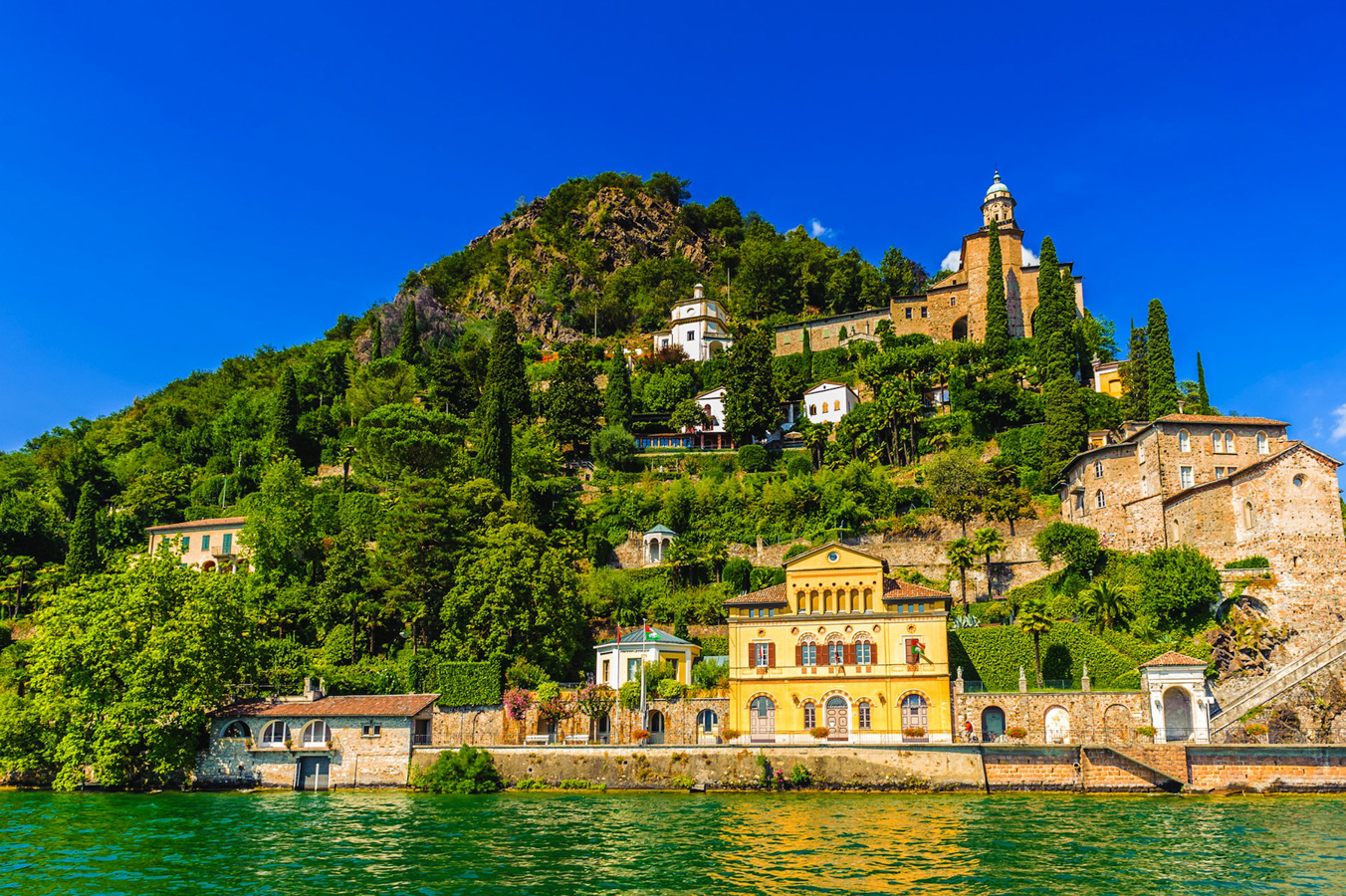 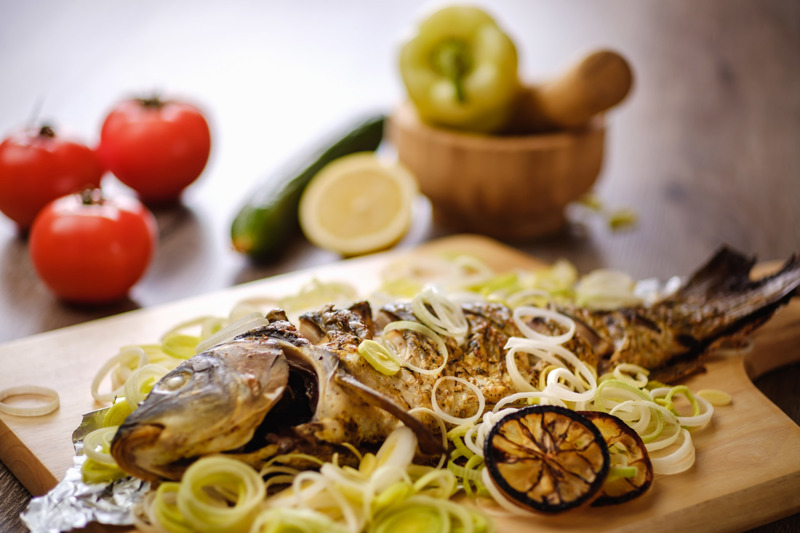 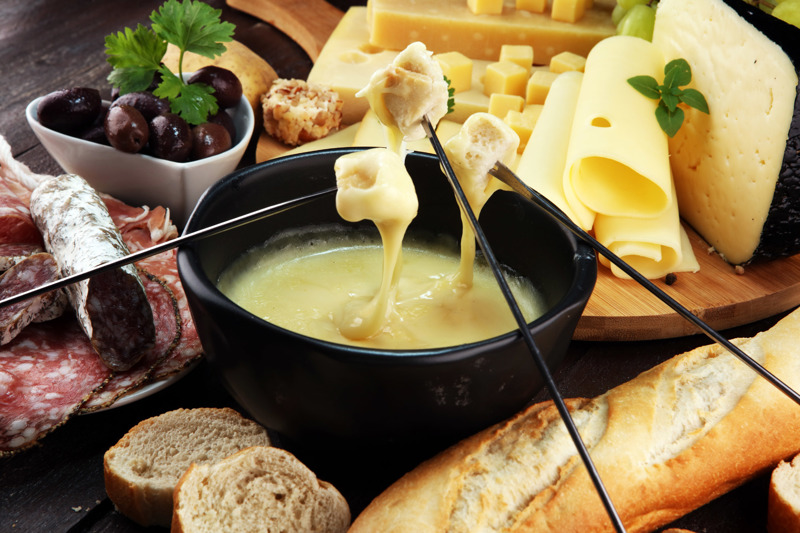 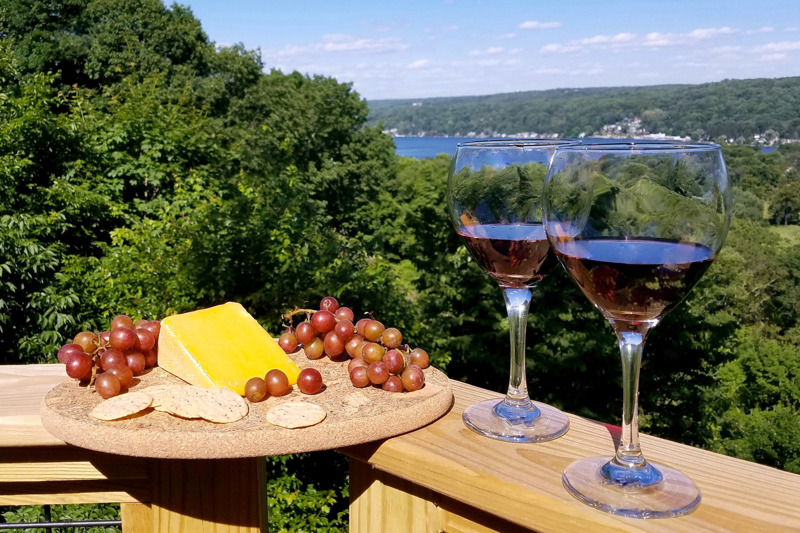 Wines.
Copyright © Sisterscom.com / Shutterstock
Another tour worth taking is a culinary one, stopping at the ‘grotti’, simple restaurants always in the shade of age-old trees, to taste traditional dishes, such as risotto with luganighe sausage, polenta, mixed boiled meat, ‘busecca’ (tripe), oven-baked or soused lake fish, as well as local fresh or mature cheeses. And we shouldn’t forget the wine tradition of Switzerland which, although within a small area, produces excellent wines, such as Merlot.
Text by Anna Fusai
Photos: Sisterscom.com, Shutterstock
Video: www.myswitzerland.com
Published on Avion Tourism Magazine
Copyright © Sisterscom.com
Updated: february 2020
Tourism Board
www.myswitzerland.com
www.luganoregion.com
www.ticino.ch
Where to sleep in Lugano

Panoramic view of Lake Lugano. Copyright © Sisterscom.com / Shutterstock
Lugano is a welcoming city and offers different possibilities for accommodation.
To find the ideal hotel and the best offers you can do a search for the stars but also for districts or landmarks.
STARS
Hotels for stars, differentiated by type of services:
LANDMARKS
Hotels in tourist areas
LANDMARKS
Hotels in tourist areas
AIRPORT
Hotels near the airport
Lugano Airport LUG
NEARLY
Hotels near Lugano
Hotels in Canton Ticino (Svizzera)

Booking.com
Where to go
Monuments, churches and tourist attractions 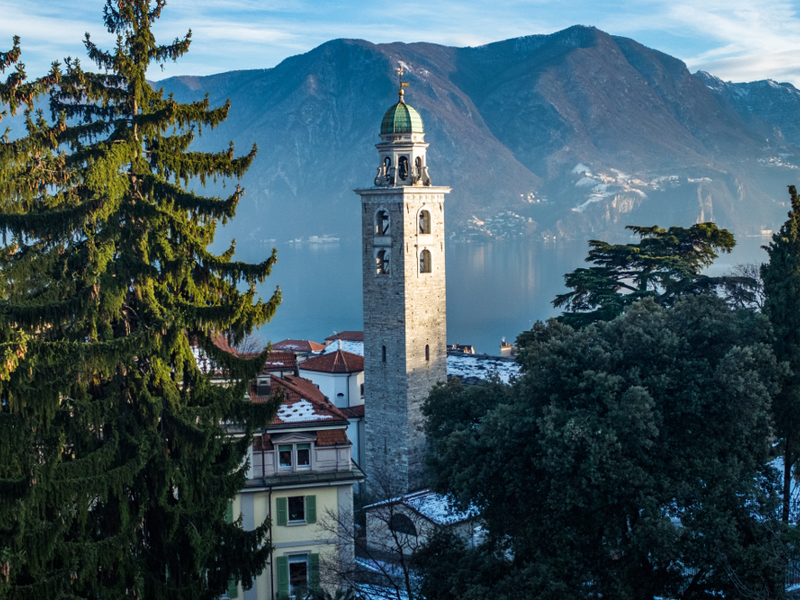 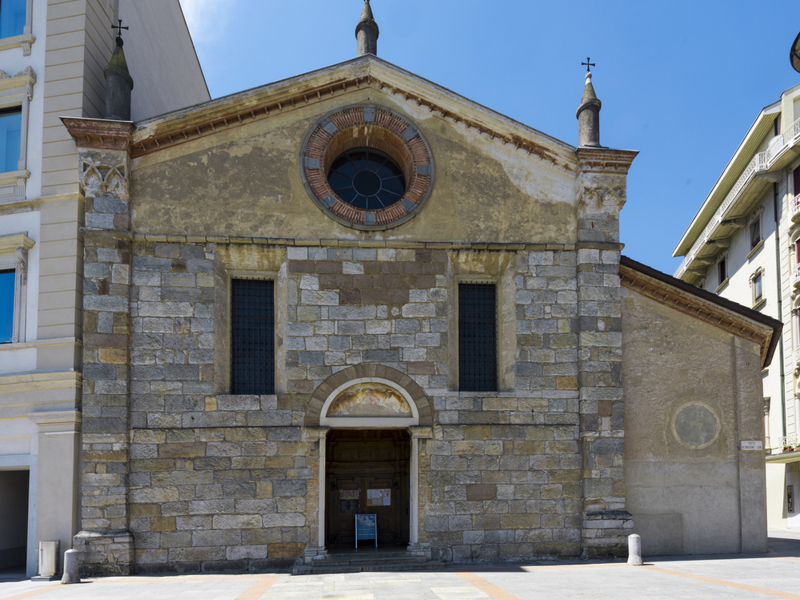 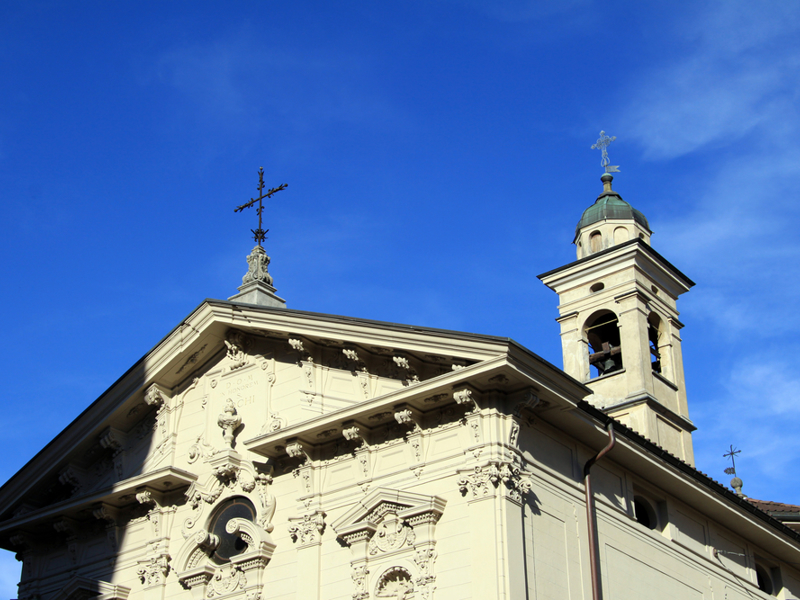 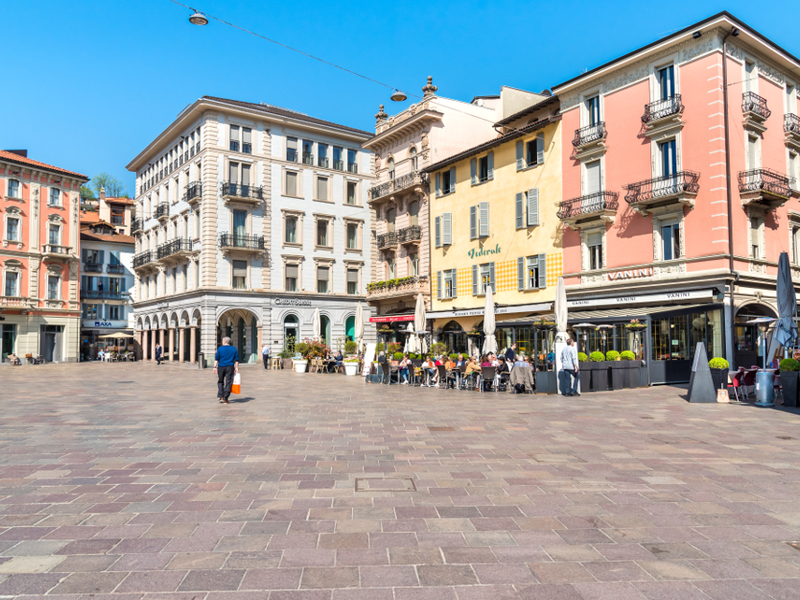 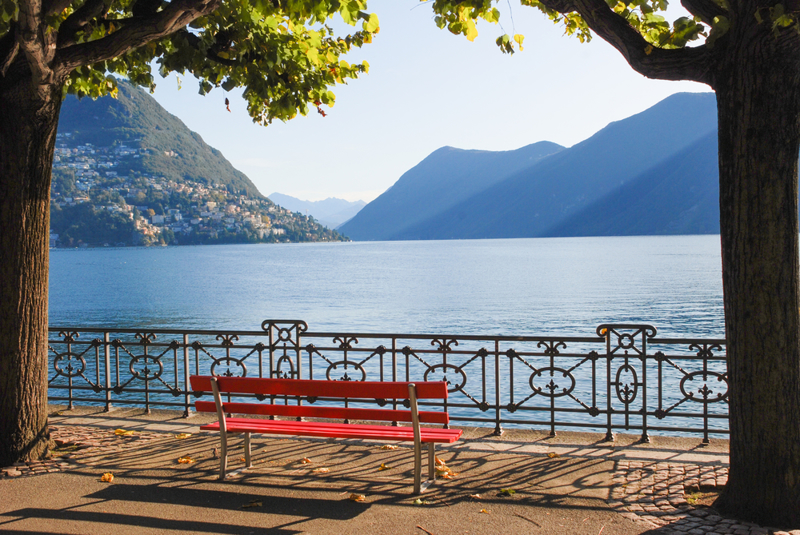 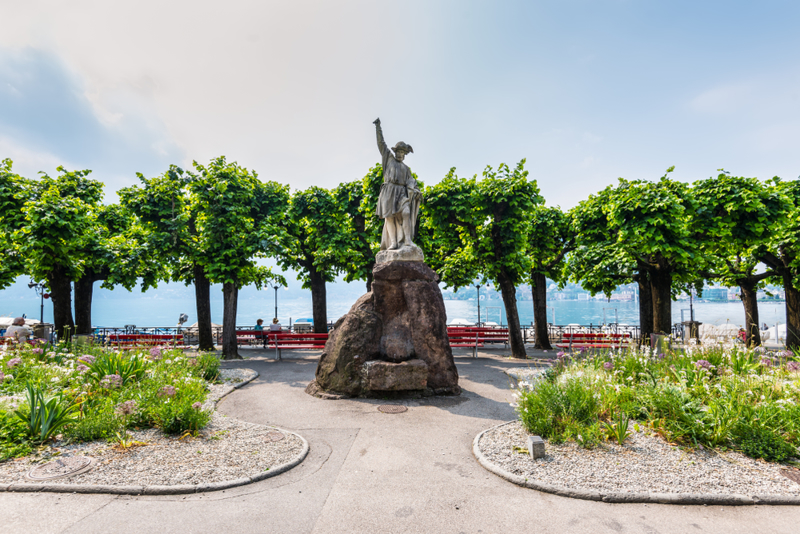 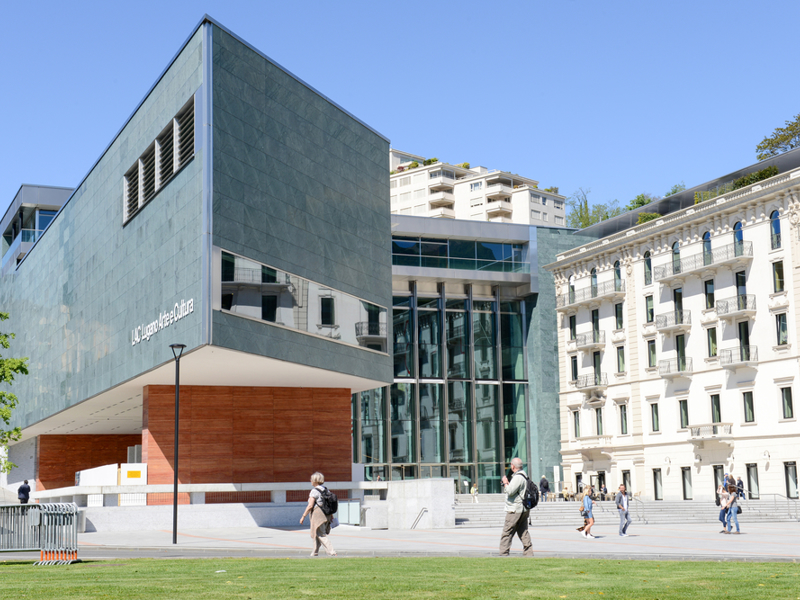 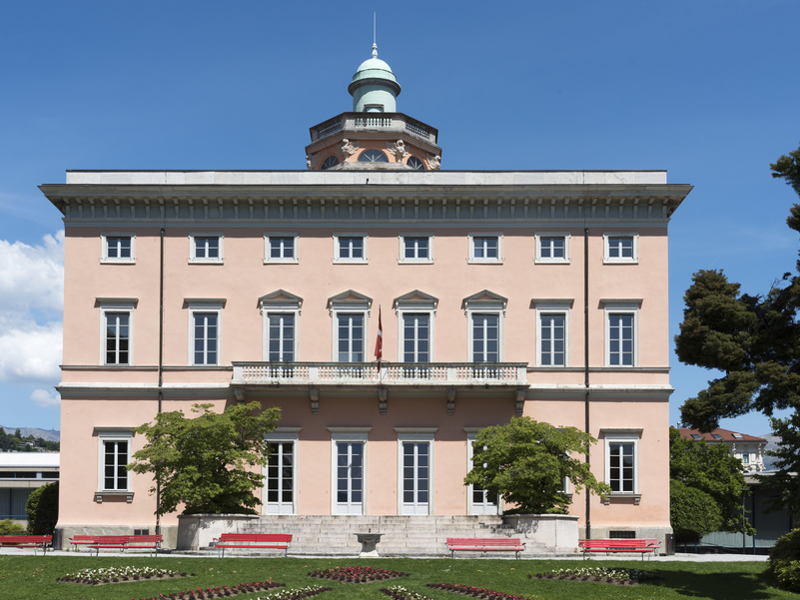 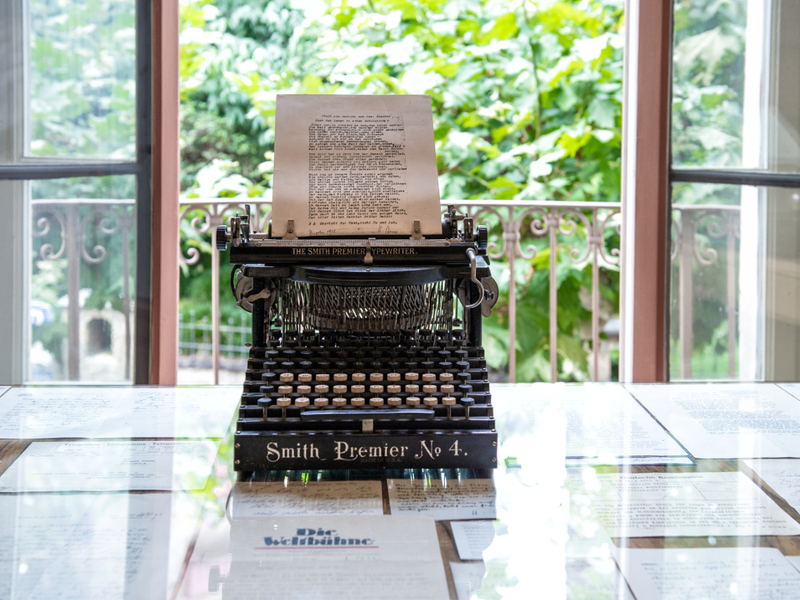 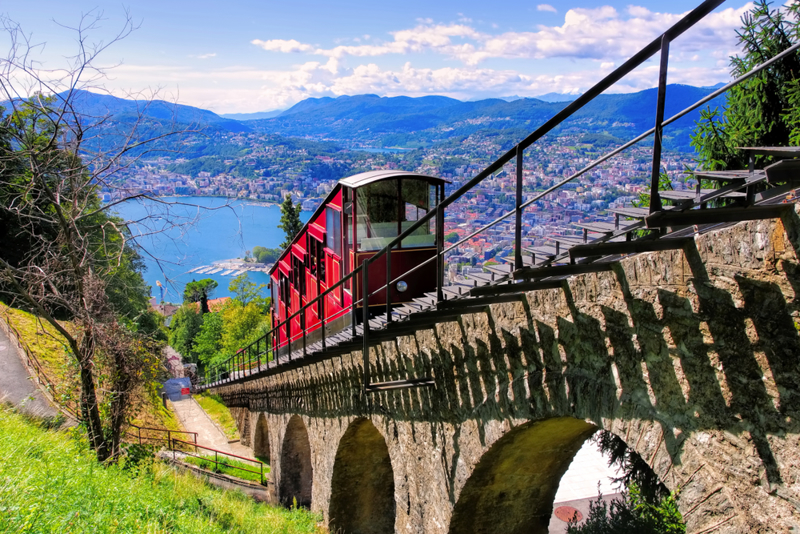 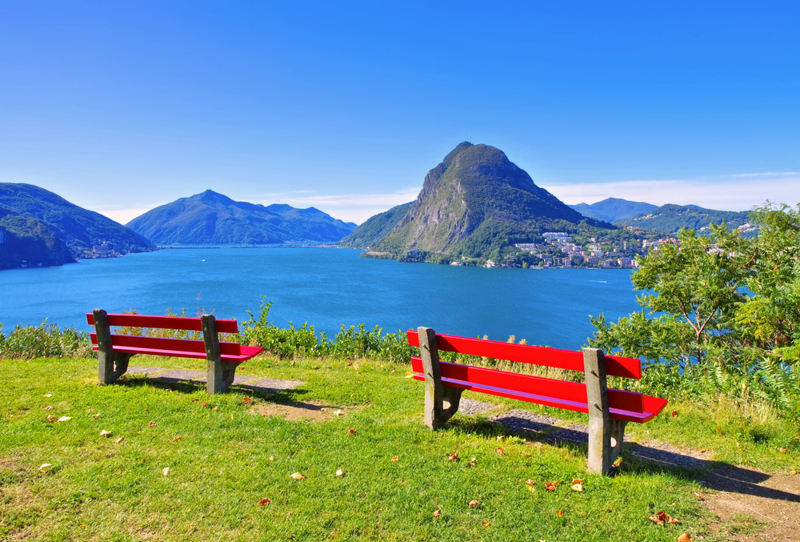 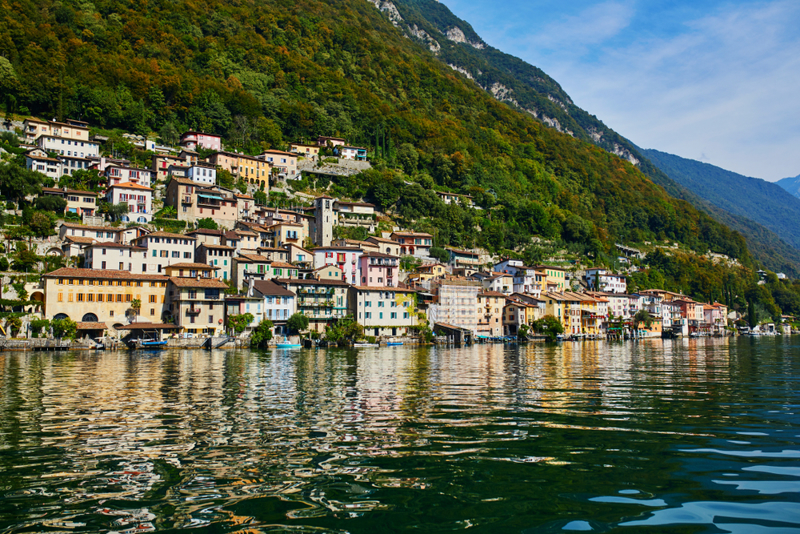 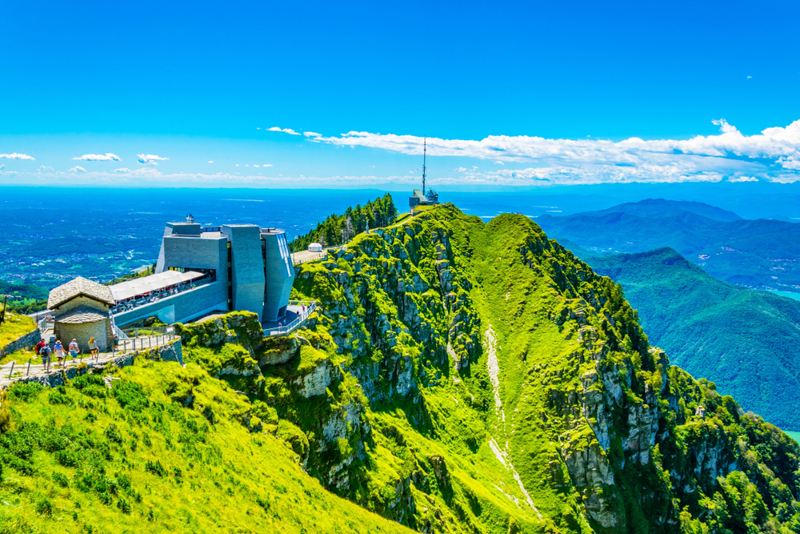 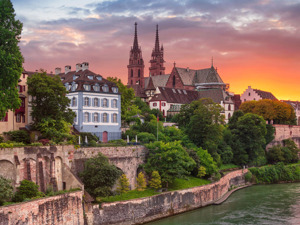 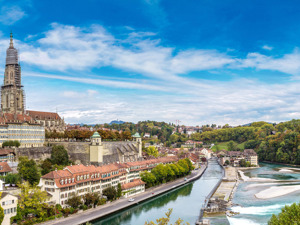 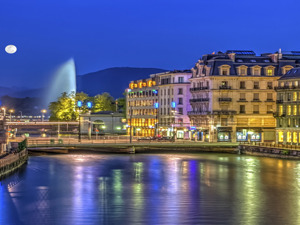 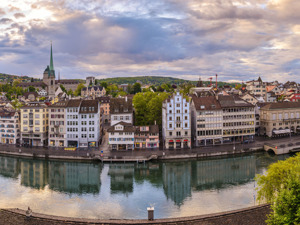 Zurich
Destinations found in the vicinity