Lampedusa
Where to go
Near by
Airports
Advertising
The island of turtles with crystal clear water
The island of Lampedusa, part of the archipelago of the Pelagie Islands of Sicily, is the largest of the group. The island surprises for its spectacular natural environment, which is abundant with rare plant species, but also for its ancient history and archaeology. 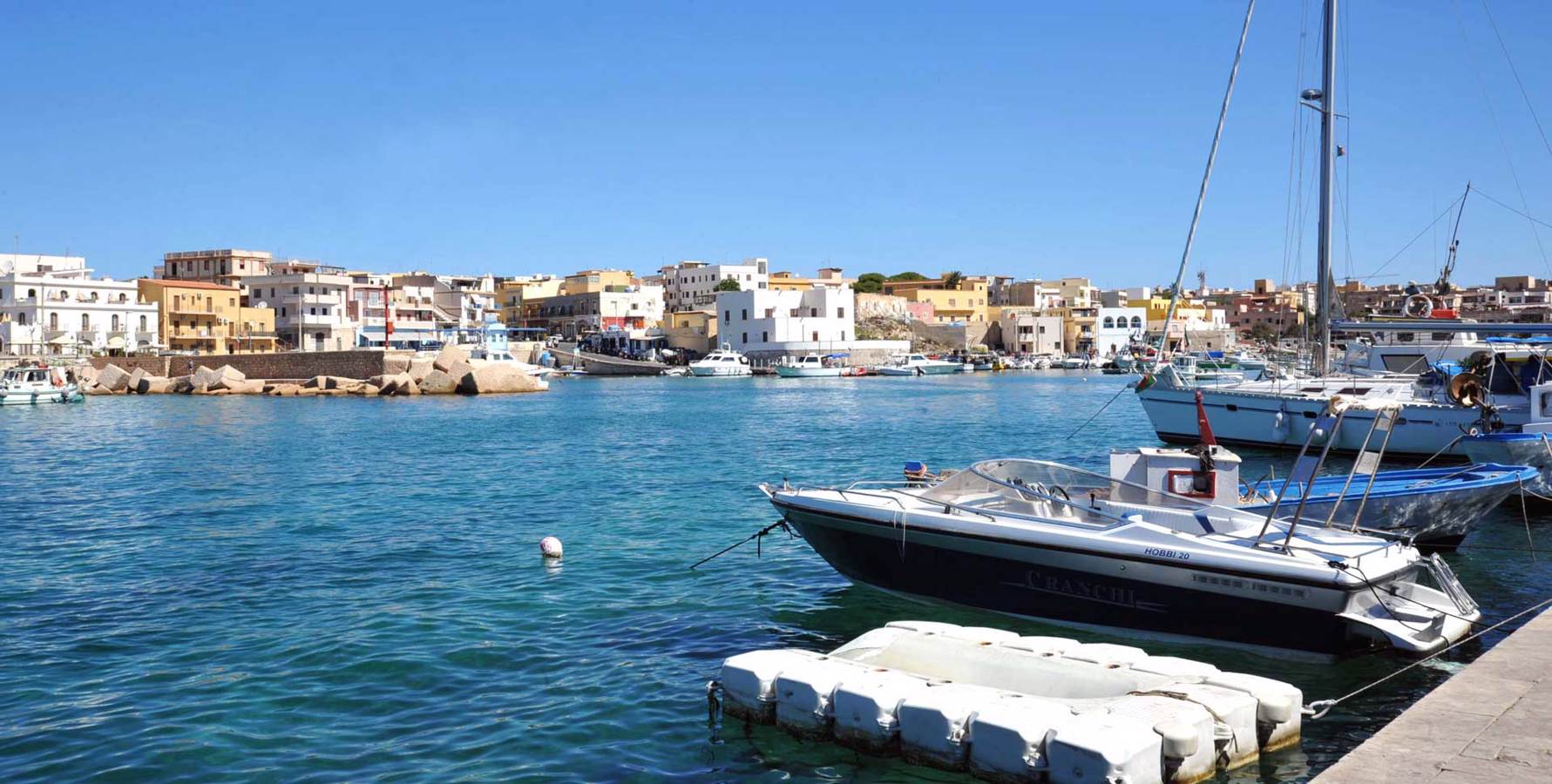 Lampedusa. Copyright © Sisterscom.com / Shutterstock
The history of Lampedusa
The history of Lampedusa has roots reaching deep into prehistory. Archaeological studies and excavations have brought to light ancient structures from eras ranging from Neolithic to Roman and Byzantine. Of particular interest are the ancient “timpuna”, defined by archaeologists as “circles of stone”, constructions only a few dozen centimetres high. The island has over two hundred of these “timpuna”, which are grouped together like small settlements. They are found mainly in Capo Grecale, between Punta Parrino and Punta Alaimo, in the areas of Imbriacole and Poggio Monaco and towards Capo Ponente. 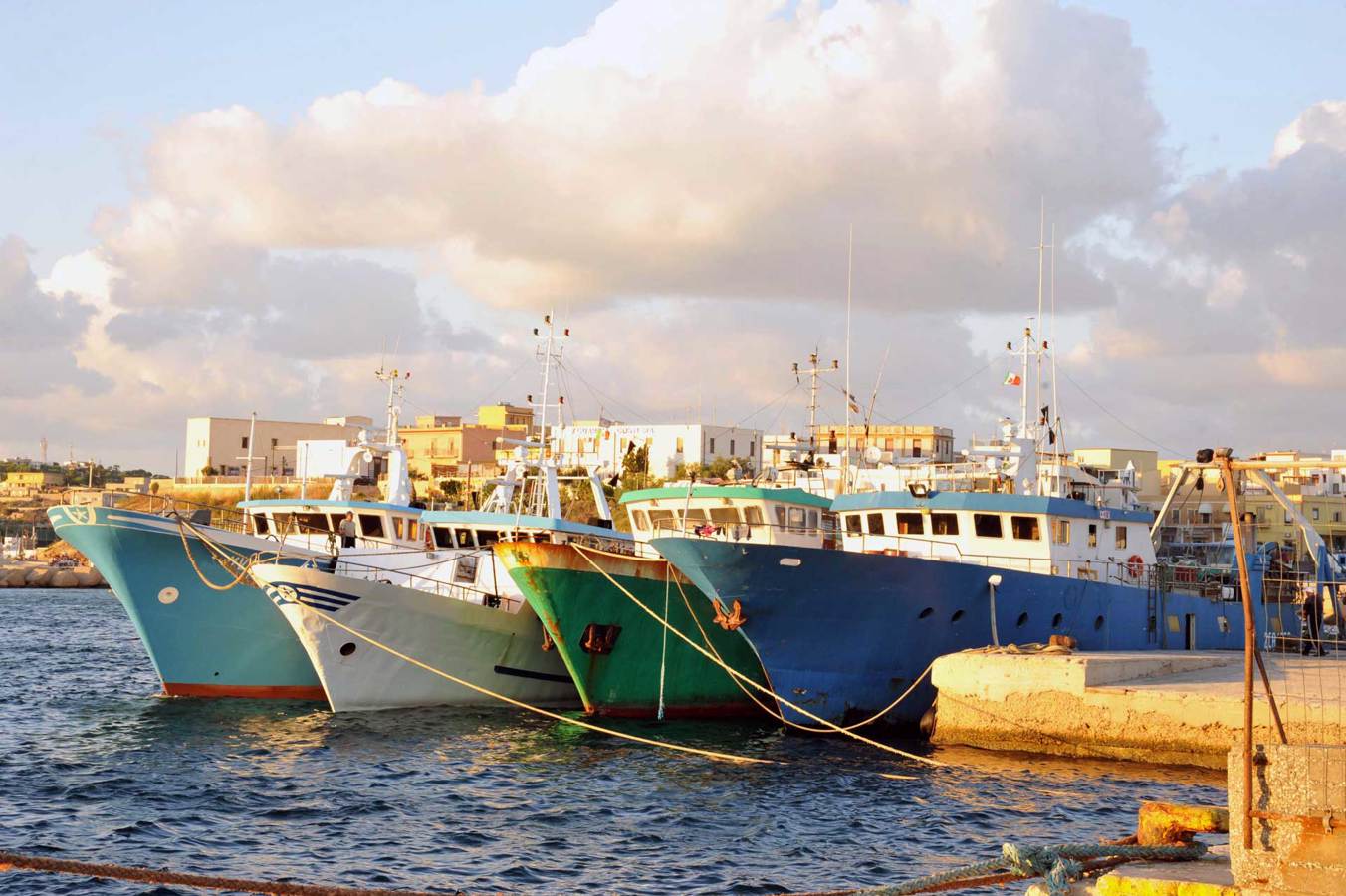 Lampedusa harbor. Copyright © Sisterscom.com / Shutterstock
These numerous circles of stone were later used as threshing floors for wheat, but their original functions and chronology are still a mystery. Researchers have various theories: they were either homes or burial areas, buildings connected to farming or the harvest or for channelling rainwater, or garden enclosures. An interesting theory claims that groups of circles were arranged in the shape of certain constellations.
The Vallone di Cala Madonna is an ancient area of the island, a sacred place, which was a meeting place for men of different cultures and religions. The presence of man in the caves in the valley dates back to the Neolithic period, between 5,500 and 2,500 BC, when a colony of Sicilians settled in the area. 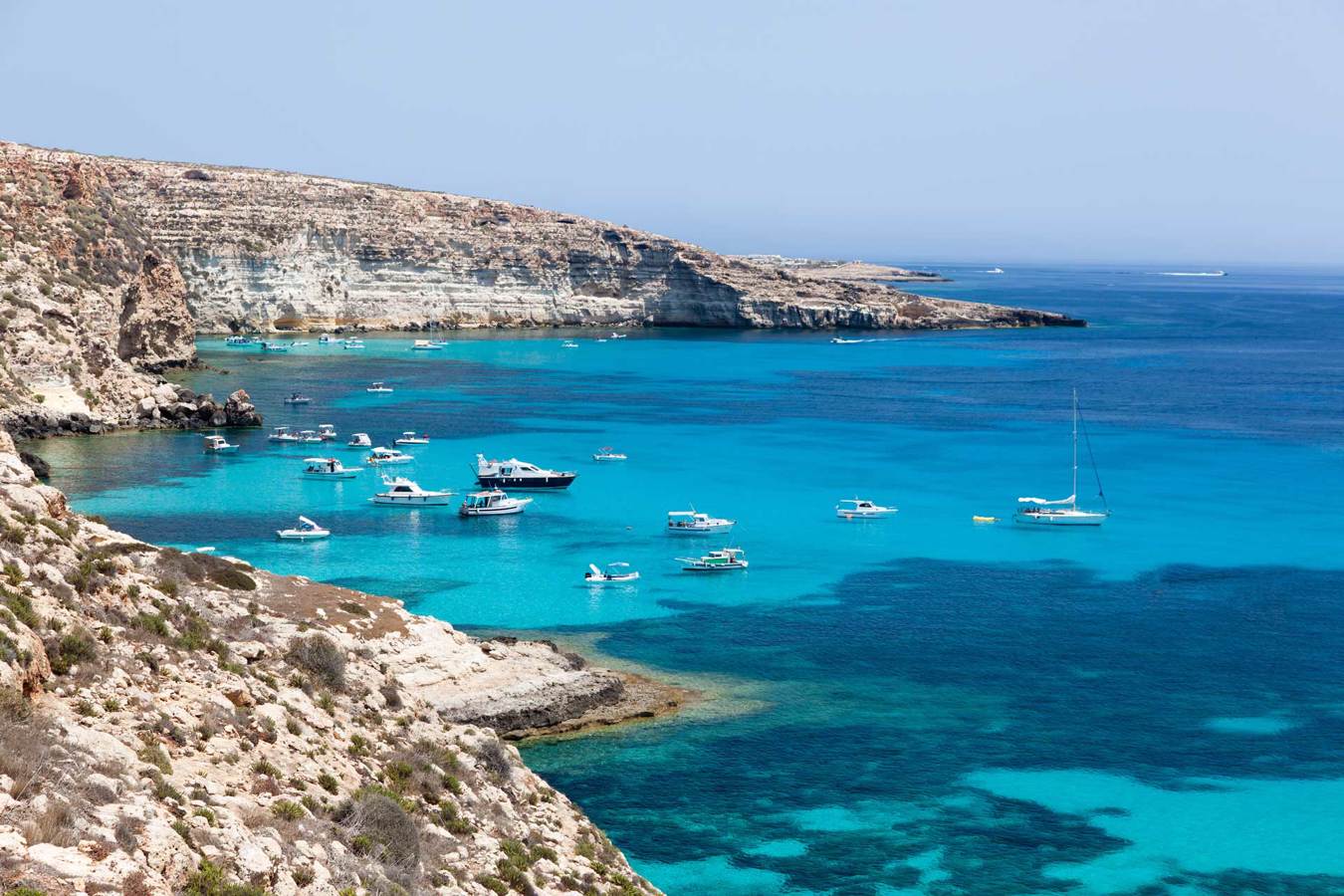 Lampedusa. Copyright © Sisterscom.com / Shutterstock
It is thought that a rainwater cistern, found here and still used today, was built in the Roman era. At the beginning of the nineteenth century, the old caves were inhabited by Maltese people, who enlarged them and built mills and even an oven. With the colonisation of Ferdinand II of Bourbon, in 1843, the small local church was restored and, following bombing during the Second World War, it was rebuilt and embellished with a lush garden that still today evokes the history of Lampedusa.
The Riserva Naturale of Lampedusa
In addition to history, the island also captivates with its valuable natural resources. The Riserva Naturale Orientata Isola di Lampedusa (Lampedusa Island Special Nature Reserve) extends for about 350 hectares along the southern coast of the island and since 1996 has been managed by Legambiente Sicilia, which takes care of the animal and plant species and rare habitats threatened with extinction.

Lampedusa. Rabbits Beach. Copyright © Sisterscom.com / Shutterstock
The protected areas include a series of deep valleys that show evidence of ancient river networks that flow into the sea, generating small sandy inlets. Among these, and of considerable wildlife importance, is the Spiaggia dei Conigli (Beach of Rabbits), where each year loggerhead sea turtles Caretta Caretta lay their eggs. The beach is enchanting, with golden sands and crystal-clear waters that are inhabited by an incredible variety of fish. Opposite the bay sits the Isolotto dei Conigli (Islet of Rabbits), the realm of yellow-legged gulls and a unique species of lizard.

Lampedusa. Rabbits Island. Copyright © Sisterscom.com / Shutterstock
There are several paths inside the nature reserve, such as the path that leads to the beautiful Cala Pulcino beach through Vallone della Forbice. This route, which is approximately 1.5 kilometres long, follows sections that have been dug out and eroded by water until it reaches the beautiful turquoise-blue sea. The first section is characterised by areas of reforestation of Aleppo Pine. Venturing further, instead, the habitat features typical examples of maquis shrubland, while nearer the sea, the main vegetation type is garigue-steppe. On reaching the beach, which is surrounded with the blue crystal-clear waters of Cala Pulcino, you can observe the blooms of Limonium Lopadusanus, a plant endemic to Lampedusa. 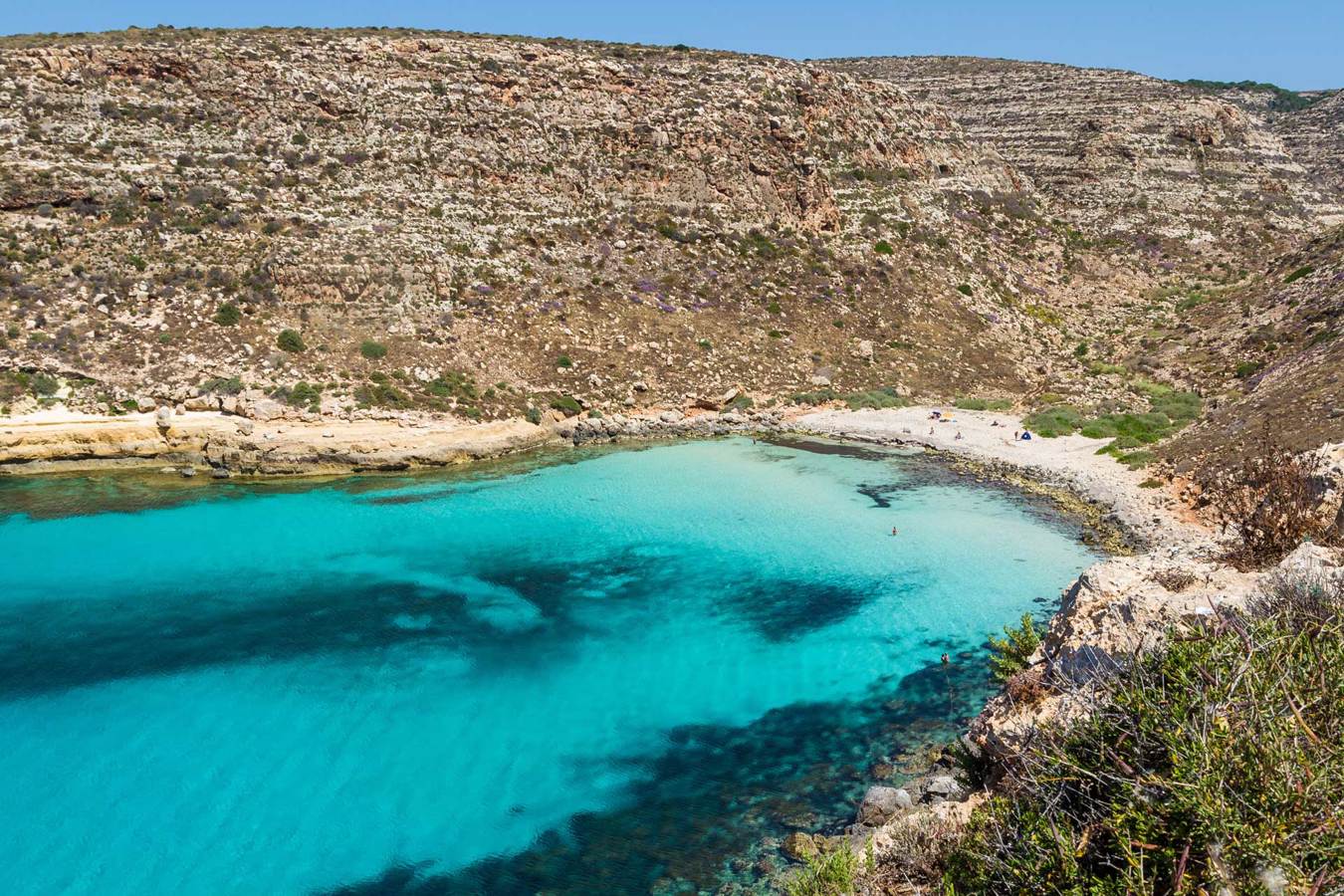 Lampedusa. Cala Pulcino. Copyright © Sisterscom.com / Shutterstock
During the walk you can also see local island fauna and meet some rare species such as the Montpellier snake and the false smooth snake, two snakes of north African origin, but also Pamphagus Ortolaniae, a large wingless grasshopper. Lastly, in spring and autumn, many species of migrating birds stop and feed on Lampedusa before continuing on their journey between Africa and Europe.
Sicilian cuisine
The gastronomic culture of Sicily originates from the culinary traditions of the populations who lived on the island. The most popular and internationally recognized products are: arancini, cannolo siciliano, cassata and the granita siciliana. Also famous are the unique dishes such as: caponata, insalata di arance (orange salad), parmigiana di melanzane and the gâteau of potatoes. The pasta is eaten every day with vegetables, meat, fish, cheese and sauces. To taste there are also: anelletti al forno, pasta con le sarde, pasta alla norma, spaghetti alla carrettera and the pasta 'ncaciata. Meat and fish cooked with various recipes abound. Not to be missed: pesce spada alla ghiotta, stoccafisso alla messinese, polpette di bianchetti and the sarde beccafico. 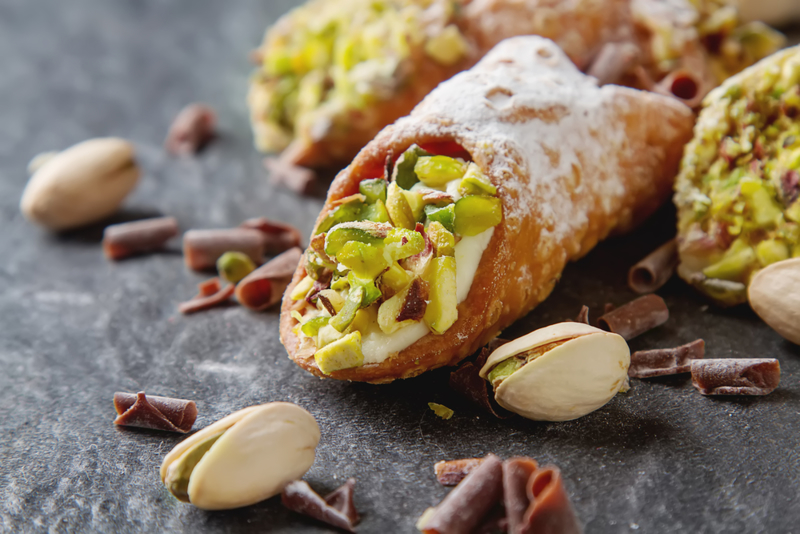 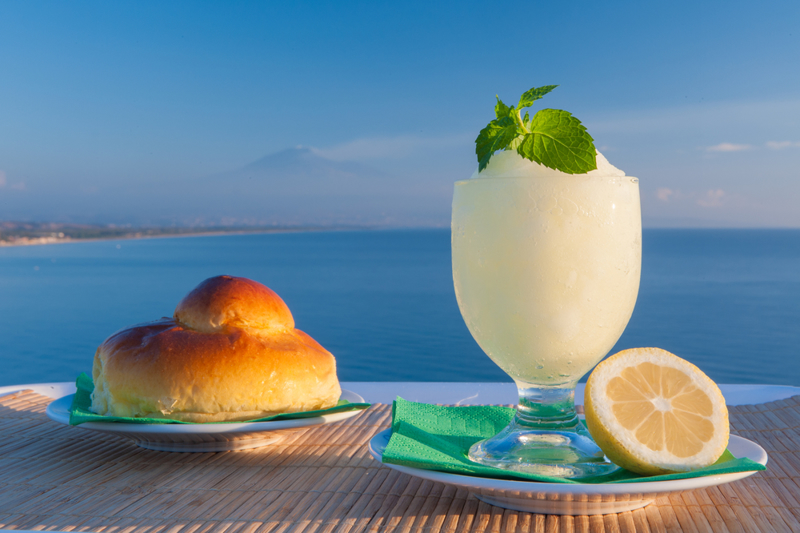 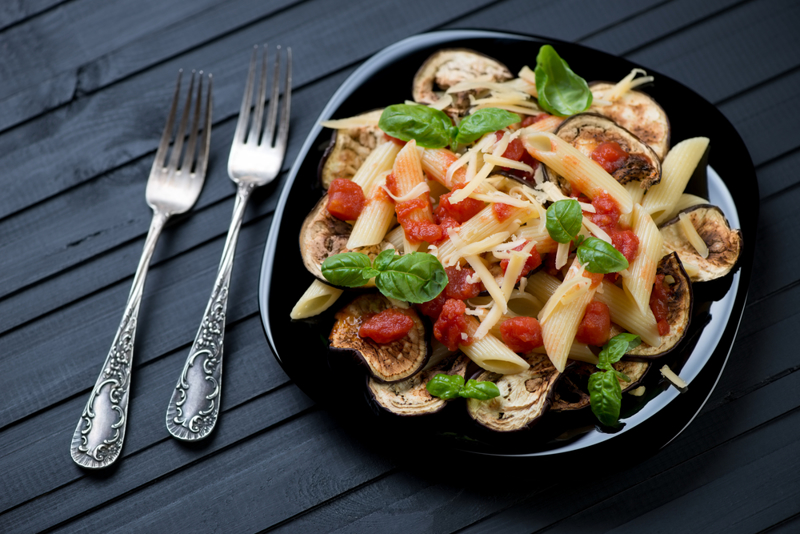 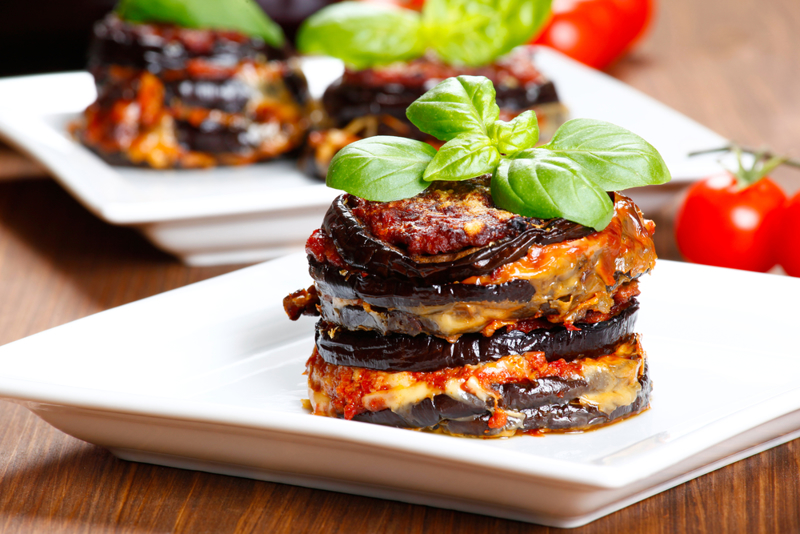 Lampedusa. Copyright © Sisterscom.com / Shutterstock
Lampedusa is a welcoming city and offers different possibilities for accommodation.
To find the ideal hotel and the best offers you can do a search for the stars but also for districts or landmarks.
STARS
Hotels for stars, differentiated by type of services:
DISTRICTS
Hotels in the districts
LANDMARKS
Hotels in tourist areas
Cala Creta Beach
Cala Croce Beach
Cala Madonna Beach
Guitgia Beach
Isola dei Conigli
Rabbit Beach
Linosa Island
AIRPORT
Hotels near the airport
Advertising

where to go in lampedusa
Monuments
SANCTUARY OF MADONNA DI PORTO SALVO OF LAMPEDUSA
Just outside the town and worthy of a visit is the Sanctuary of the Madonna di Porto Salvo, patron saint of the island, to whom the most important festival of the island, held in the month of September, is dedicated. The church looks like it could date back to the crusades and is made all the more beautiful by a flower-filled garden. The original stone flooring and the grooves of a large grinding wheel used to mill wheat can still be seen today. The place is interesting as it is one of the few archaeological sites on the island of Lampedusa.
"CASSODORO" OBELISK
This bronze sculpture dating back to 1988 was designed for Lampedusa square by the artist Arnaldo Pomodoro, who specified: “it is a monument to those who fell in all wars and a work in honour of the will to survive. I wanted to include the presence of stones and sailors’ ropes, of risks and debris from the sea and the extreme experience of fishermen”. On the four sides of the obelisk, Pomodoro uses particular signs to describe stories, prayers and works, inviting us to reflect on the past.
PORT OF LAMPEDUSA - PORTA D'EUROPA
This monument is dedicated to the migrants who lost their life at sea before reaching the island of Lampedusa. Created by Mimmo Paladino, it is a large door almost five metres high and three metres wide made of refractory ceramic material. The door evokes the memory of the thousands of migrants who died, in an inhumane way, in an attempt to reach Europe. The work reminds future generations that they should never forget, inviting them to reflect on humanitarian issues.

Excursions
BEACHES OF LAMPEDUSA
Visiting the island’s most beautiful beaches is an unforgettable experience. Beaches to visit for their beauty include Cala Croce, Guitgiaand the renowned Isola dei Conigli, one of the most captivating of the entire Mediterranean area due to its crystal-clear sea filled with brightly coloured fish. Equally beautiful are the beaches of Cala Madonna and Cala Francese. Instead, beaches with cliffs are Punta Sottile, Cala Creta and Cala Calandra, and pebble beaches include Cala Spugna, Cala Pisanaand Cala Pulcino, near the Isola dei Conigli. At all beaches the sea is turquoise blue, crystal clear and clean, and populated by sponges and an abundance of fish. The beaches also are home to the sea daffodil. 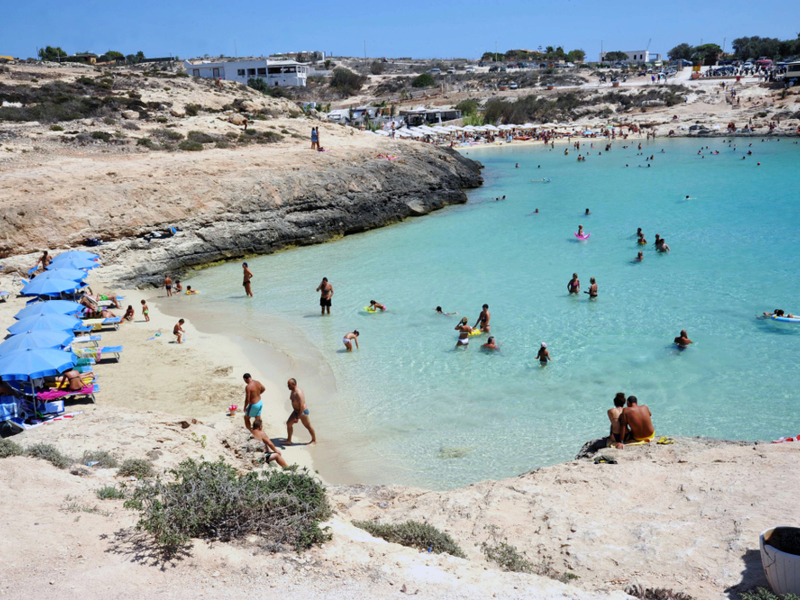 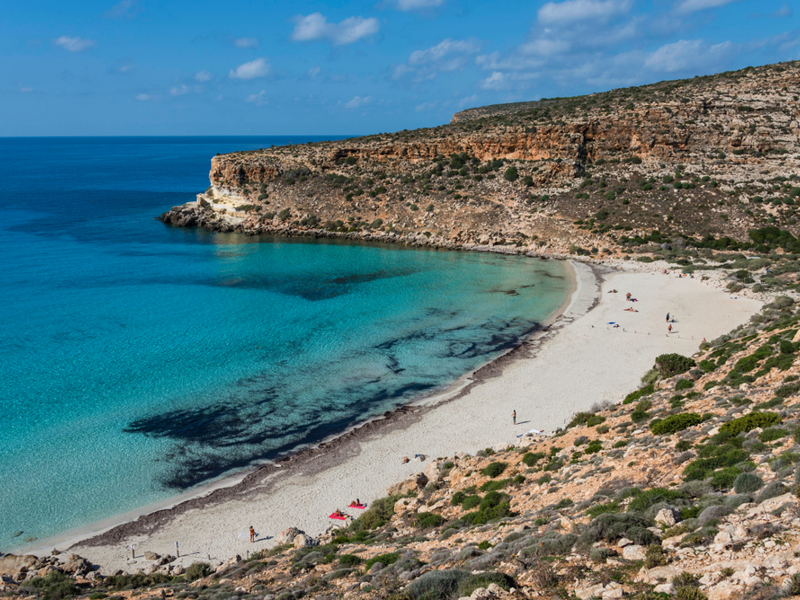 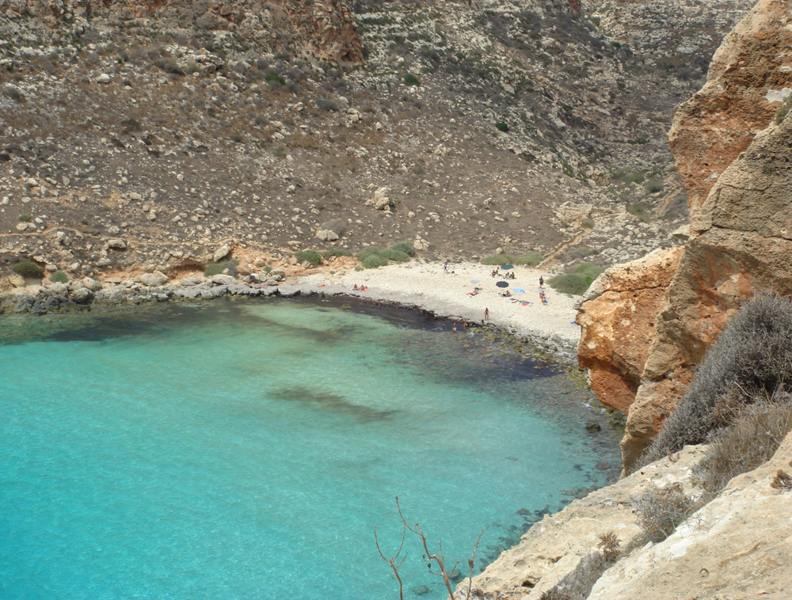 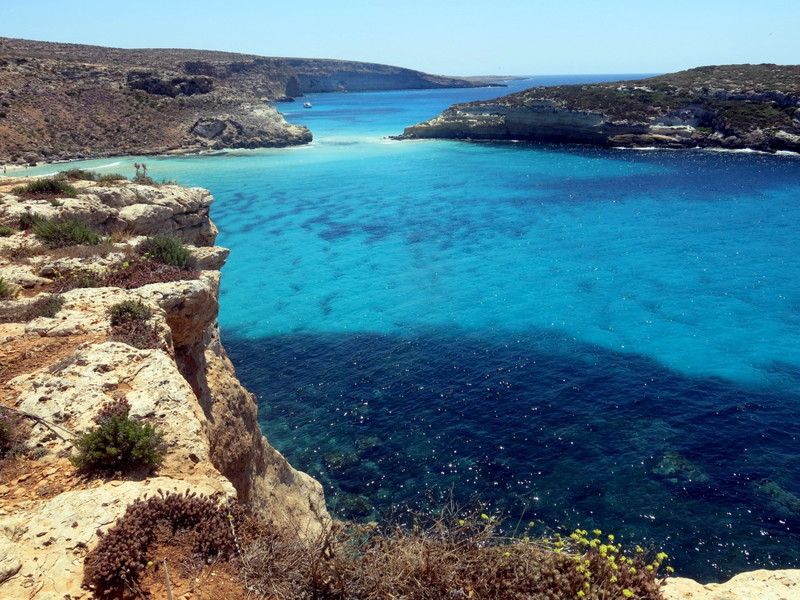 Copyright © Sisterscom.com / Shutterstock
DIVING
Lampedusa and the Pelagie Islands, of which Lampedusa is a part, offer a fascinating biodiversity hidden in the turquoise blue sea: sandbar sharks, dolphins, sea turtles, parrot fish, whales and many other species. A particular dive can be taken off the Isola dei Conigli, along the southern part of the island, where a small rock, known as the “Scoglio della Madonnina” flourishes with wildlife. The rock has a pyramid shape and features a large hole that passes from one side to the other. At the entrance of the hole, at a depth of approximately 15 metres, is the striking life-size bronze statue of the Madonnina di Porto Salvo. 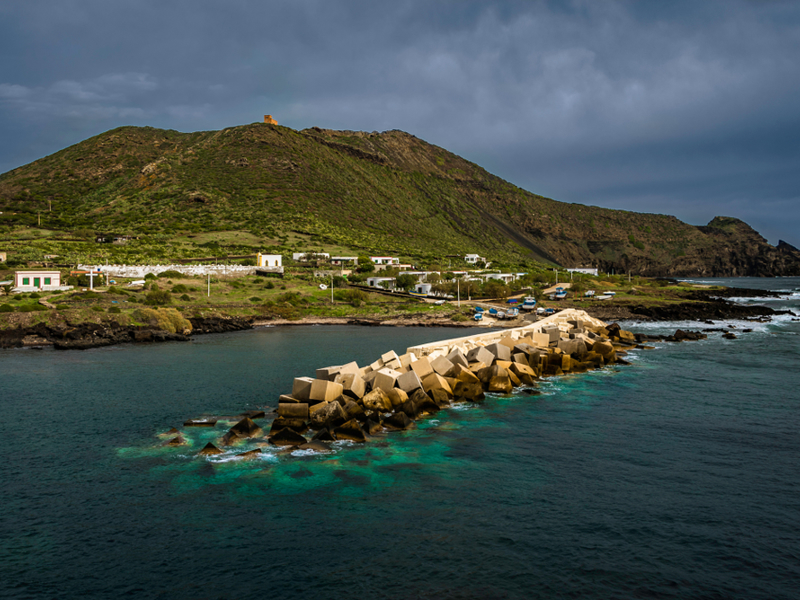 Copyright © Sisterscom.com / Shutterstock
ISLAND OF LINOSA
A wonderful trip to take by boat is to the nearby Island of Linosa, 50 km from Lampedusa. This small island is only 3.5 km long and has a coastline of 11 km. Linosa is an island of volcanic origin and visits can be arranged to old craters and volcanic cones. There are many places to visit, such as the two military lookout posts of M. Rosso and M. Vulcano, the "Fossa del Cappellano" and the nesting site of the Scopoli’s shearwater. A trip around the island can be taken to see the beach of Pozzolana di Ponente, the only site where the turtle Caretta Caretta lays its eggs, the “Faraglioni” (sea stacks) the Grotta del Greco and the Cala dei Fili. Scuba diving here reveals sea depths rich in marine flora and fauna and archaeological finds.
Advertising 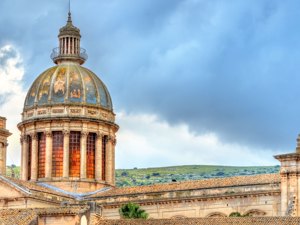 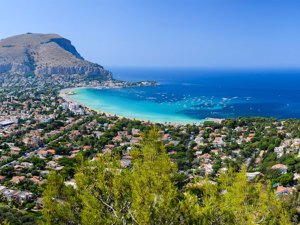 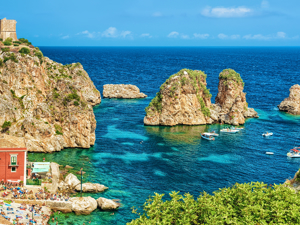 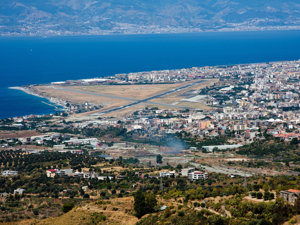 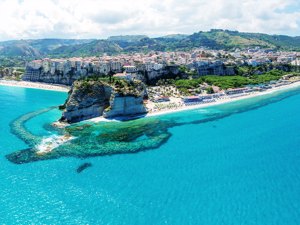 Italy
The Citron Riviera and Coast of the Gods 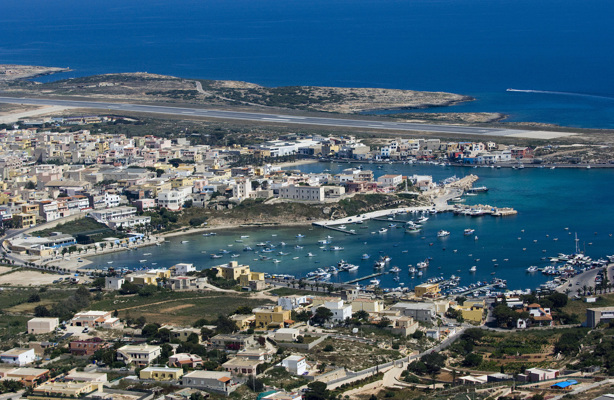 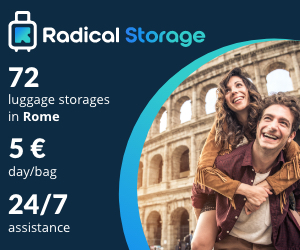 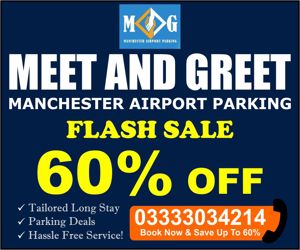 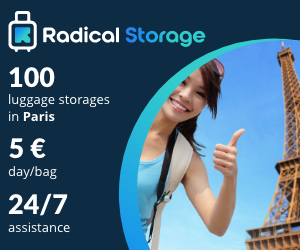 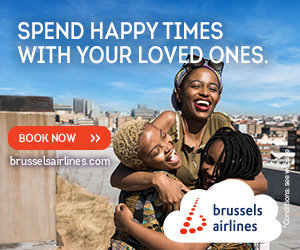