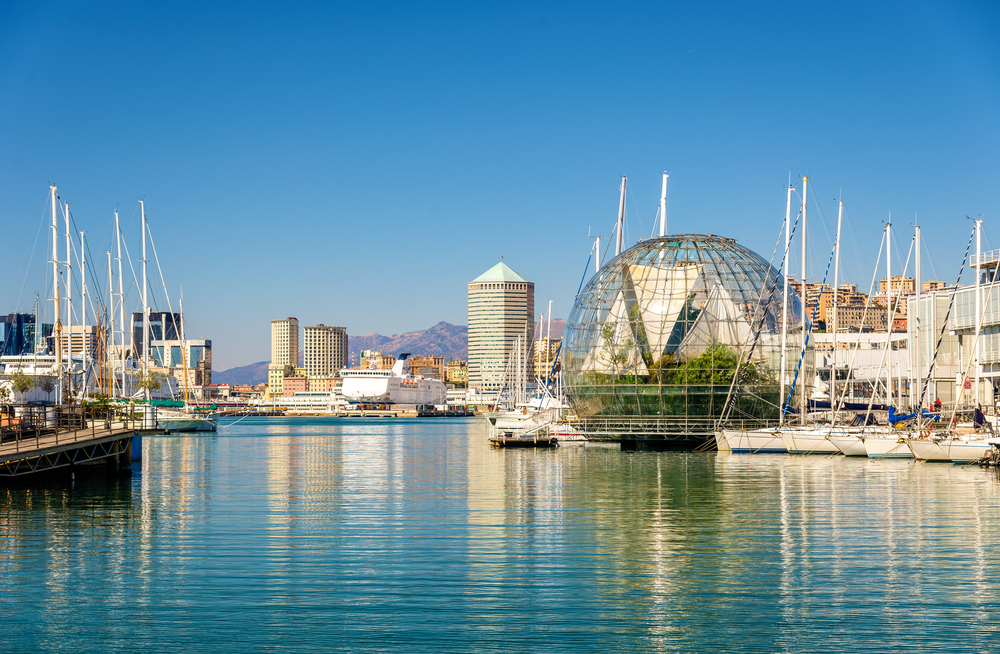 The porto antico
The porto antico
Genoa has its historical past linked to the sea and its beating heart is the Porto Antico quarter, redesigned in 1992 by the renowned architect Renzo Piano for the fifth centenary celebrations of Christopher Columbus’ departure from Genoa on a journey that would lead to the discovery of America.
Today, this area has become the centre of entertainment and leisure for not only the Genoese, but also for tourists. Inside, the Magazzini del Cotone (cotton warehouses), at one time deposits for this material, are nowadays a venue for international conventions and conferences with 12 multimedia rooms, each named after a wind on the Rosa dei Venti (wind rose), and a modern shopping centre with advanced equipment, which combines the charm of the ancient structure with the most modern of technological solutions. Within the complex, there is also the Citta dei Bambini (children’s village), a play area for children aged 3 to 14 years, and the Padiglione del Mare e della Navigazione (pavilion of the sea and navigation), which displays a fascinating 2,000 square metre exhibition on the history of the navy, to which the city has been linked right from its very beginnings. 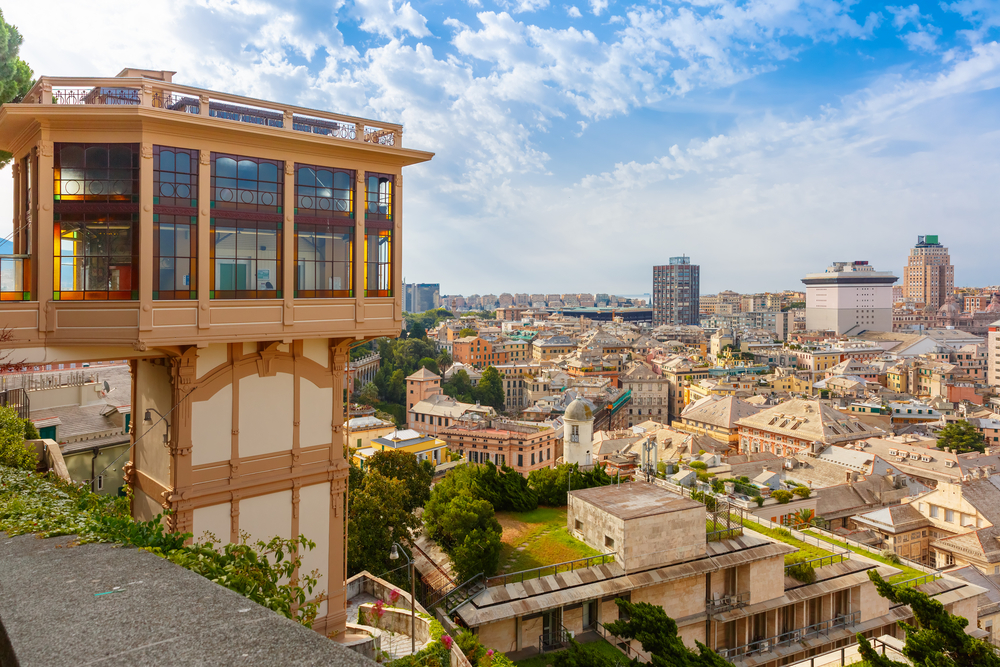 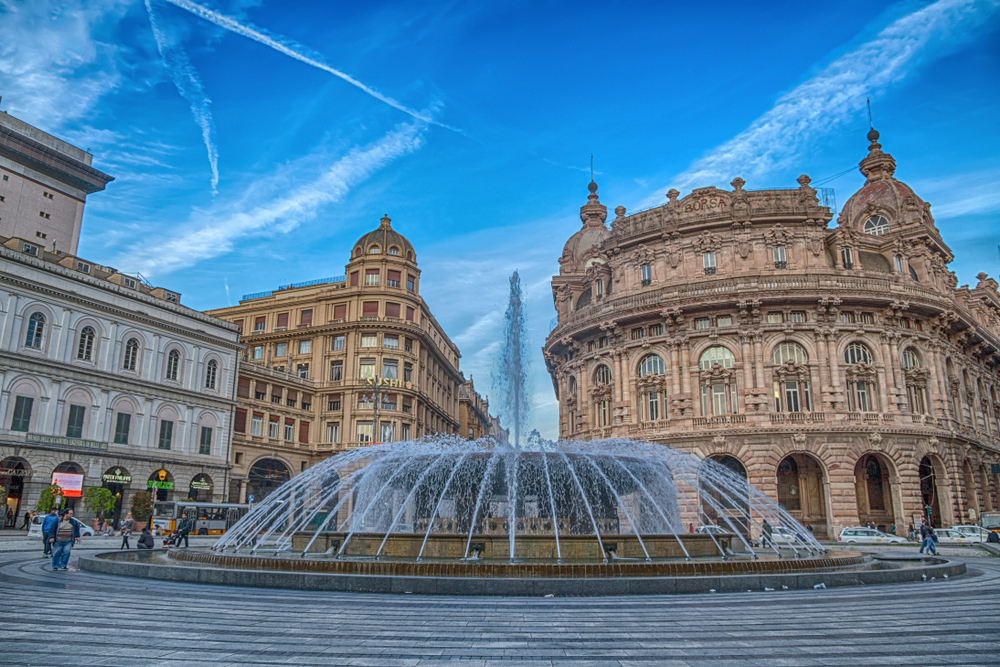 Piazza De Ferrari
Genoa has a past of great architectural magnificence, due to the immense riches that local noble families lavished on their abodes in the 1500s. Many of these are situated along Via Garibaldi, once known as Via Nuova, and include: Palazzo Rosso, Palazzo Bianco and Palazzo Tursi. 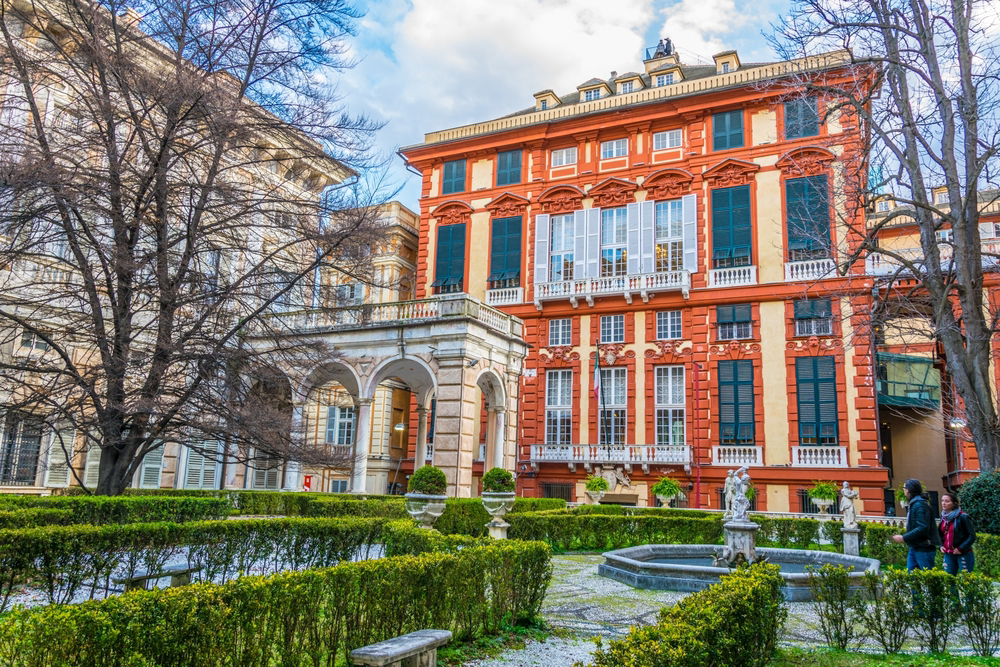 The Palazzo Rosso
The Palazzo Rosso
Palazzo Rosso, former town home of the Brignole Sale family, was donated to the city by the last heirs provided it maintained its appearance as a private residence. Inside works by Veronese, Guido Reni and Van Dyck, refined stucco works and rich furnishings from the past, can be admired.

The Palazzo Bianco
The Palazzo Bianco
On the other hand, Palazzo Bianco, also property of the Brignole Sale family, looks like an art gallery, and houses a valuable collection of Genoese, Italian, Spanish and Flemish paintings from the sixteenth to the eighteenth century. 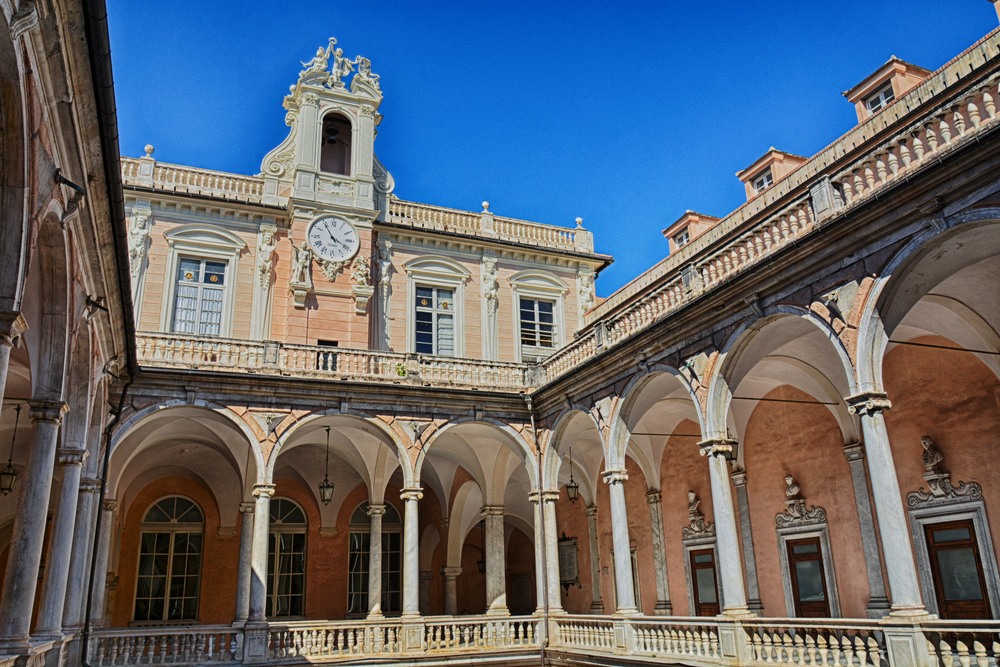 The Palazzo Tursi
The Palazzo Tursi
Palazzo Tursi, originally owned by the Grimaldi family, then the Doria family, the Dukes of Tursi, has been the headquarters of the municipal administration since the 1800s. Inside, however, it houses important works of art, pottery and coins, and above all the extraordinary Guarnieri del Gesù violin, dating back to 1743, a masterpiece of Cremonese violin making and famous due to having apparently been owned by Niccolò Paganini.
Around Genoa 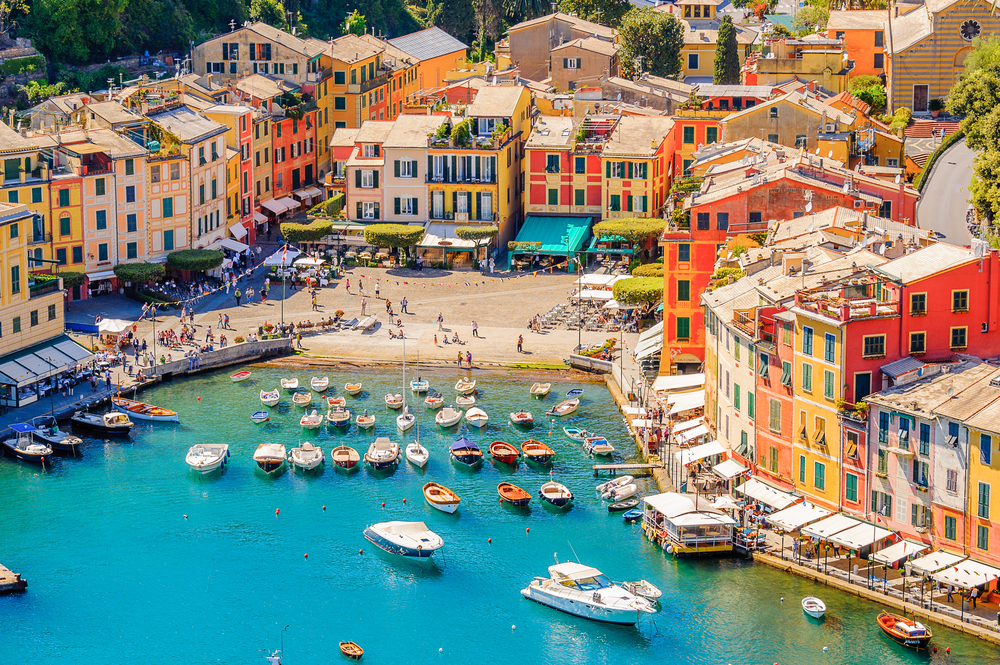 Portofino
Genoa has extremely interesting surroundings, renowned around the world, such as Portofino, known for being a destination for VIPs, which has an exclusive por, able to accommodate 300 vessels. In the sea of this jewel of a town, famous for its coloured houses, sports such as sailing and windsurfing, can be enjoyed, as well as scuba diving that attracts enthusiasts from all over the world due to the abundant waters. Monarola
It is worth visiting the nearby Parco delle Cinque Terre, recognised by Unesco as a World Heritage Site, with its bays and small beaches, quaint rural villages and sanctuaries...
For lovers of horticulture, the Hanbury Gardens are a must-see attraction. Located on the nearby Mortola Peninsula, the gardens were founded in 1867 by the Englishman Sir Thomas Hanbury to satisfy his great passion for botany. They contain as many as 5,800 species of plants and have become one of the main attractions of the area surrounding Genoa.
The tipical dishes of Genoa
Amongst all these wonders, even the gastronomic aspect of the Ligurian city is something to behold, the most famous local recipe being without a doubt pesto, prepared according to the most rigorous tradition: with basil, garlic and pine nuts and mixed with locally produced olive oil and ground with a marble mortar and a pestle made of olive wood. But the other delicacy is most certainly focaccia, either plain or in the most delicious variations: with onions, olives, sage or potatoes. 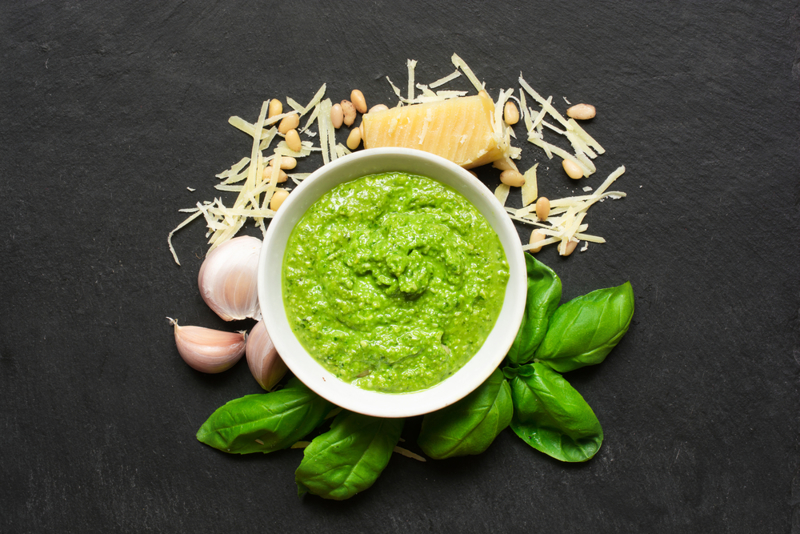 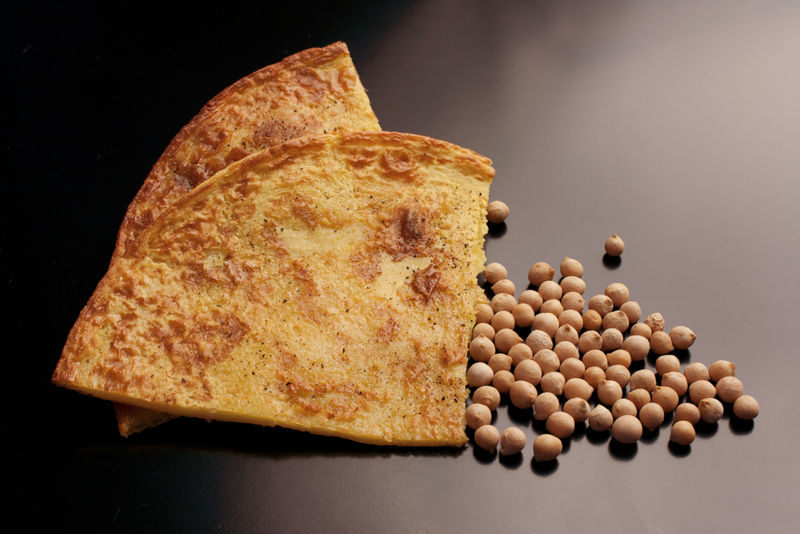 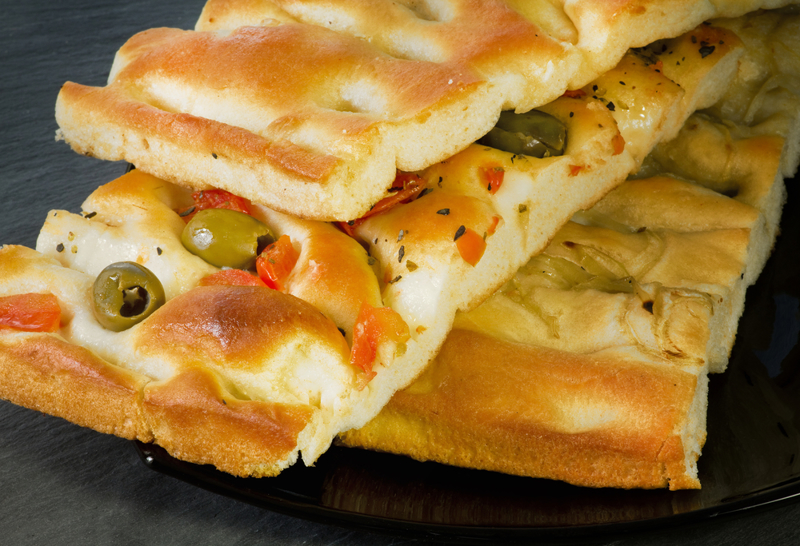 Genoa is a welcoming city and offers different possibilities for accommodation.

Where to go
Monuments and Museums 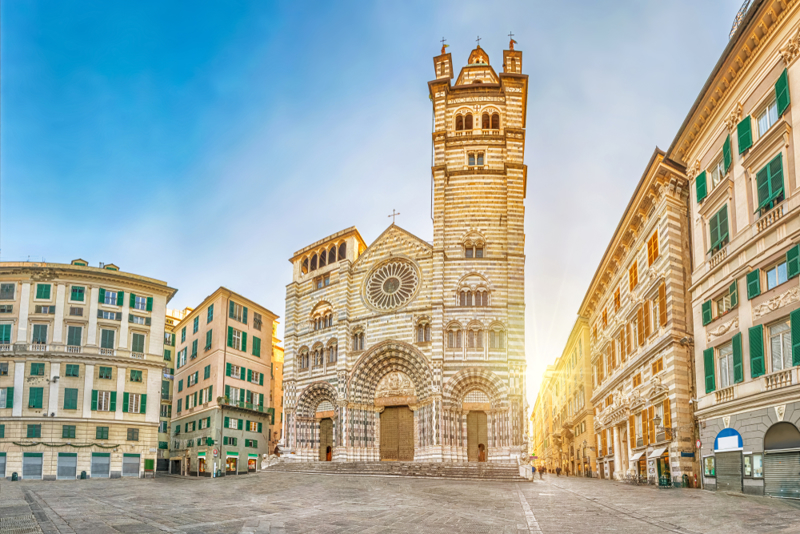 SAN LORENZO CATHEDRAL
San Lorenzo Square
The Cathedral of San Lorenzo was built around 1098 and expanded over the centuries. The monumental and precious Cathedral of San Lorenzo preserves the ashes of St. John the Baptist, the patron saint of the city, arrived in Genoa at the end of the First Crusade. The restoration work performed between 1894 and 1900 gave the cathedral its present appearance, enhancing the Medieval areas that characterize it. Accessed from within the Cathedral, is possible to see the beautiful Museo del Tesoro and the Museo Diocesano. 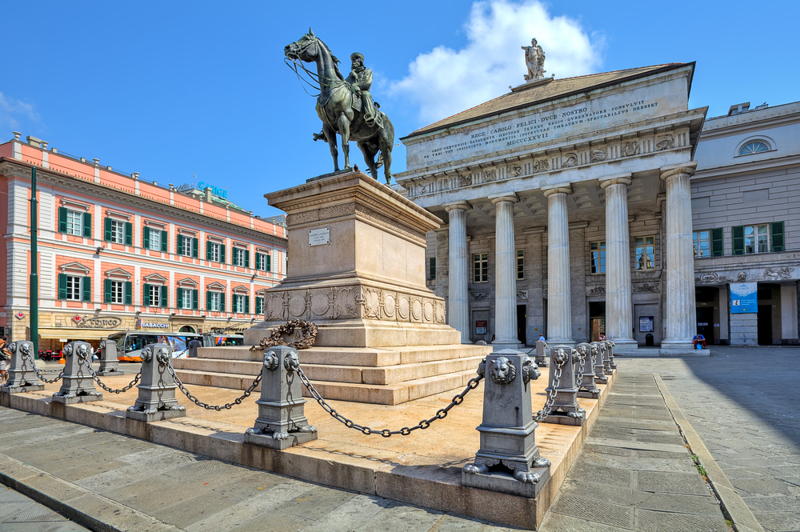 CARLO FELICE THEATRE
Passo Eugenio Montale, 4
Designed by the architect Carlo Barabino and built in 1827, the Carlo Felice Theatre is the opera house of the city. Damaged by bombing in the Second World War it was completely rebuilt. The main hallhas a capacity of 2000 seats and can accommodate an orchestra of 88 elements. The Carlo Felice Theatre has hosted important conductors, orchestras and prestigious dance compagnies from all over the world.
www.carlofelicegenova.it 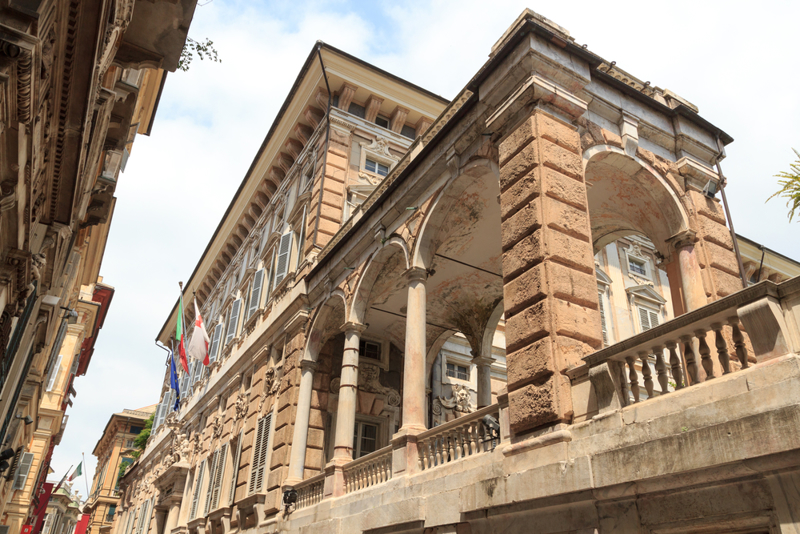 STRADE NUOVE and PALAZZI DEI ROLLI
With its beautiful palaces, Via Garibaldi (the New Street dating to the mid-16th century) also known as "Via Aurea" (the Golden Street), is an interesting streets for its architectural palaces. Opened after 1550, to host the city's most important families, it was originally called "Via Aurea" due to the splendour of its buildings, and then “the new street of palaces”. On 2006, the "Strade Nuove" were recognised as a Unesco World Heritage Site, together with the "Palazzi dei Rolli". 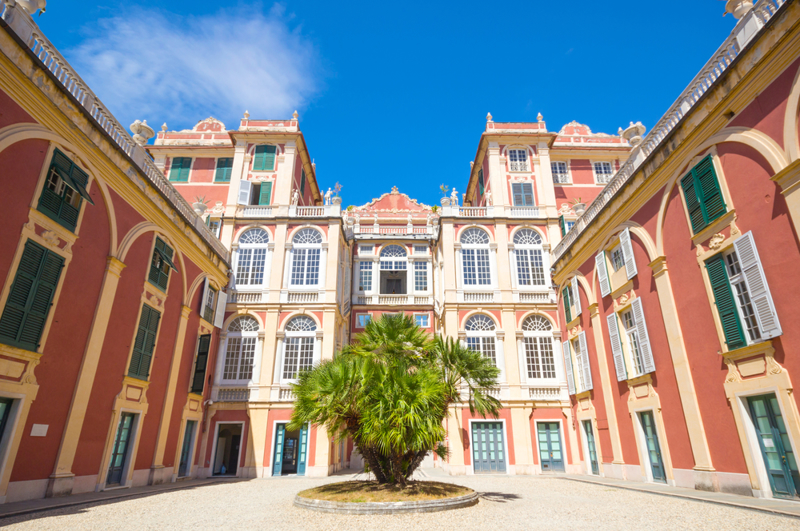 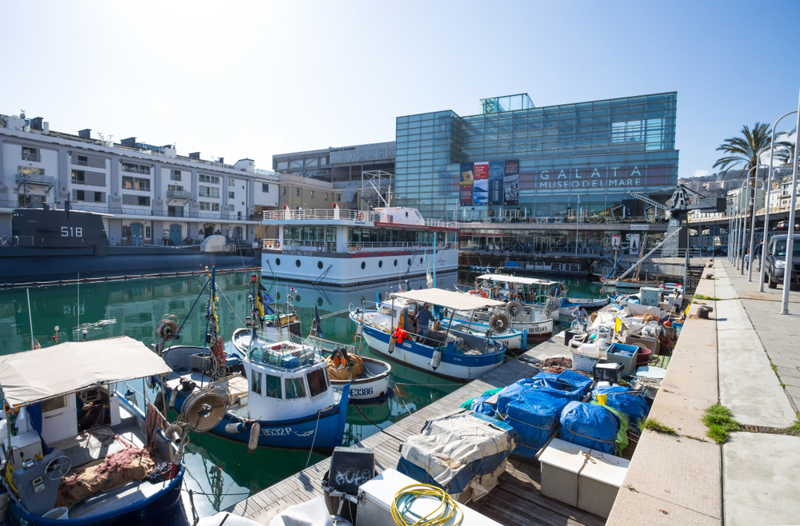 GALATA SEA MUSEUM
Calata De Mari, 1
The Galata Sea Museum, the largest maritime museum in the Mediterranean, is housed in the building of the Galata, the oldest construction of the dockyard of the old Republic. The tour is divided into 28 large rooms and the stunning rooftop terrace Mirador. Galata is the most visited museum in the Liguria region and the most visited Italian themed museums: from 2010, with the submarine Nazario Sauro, the number of visitors exceeds 200,000 people.
www.galatamuseodelmare.it 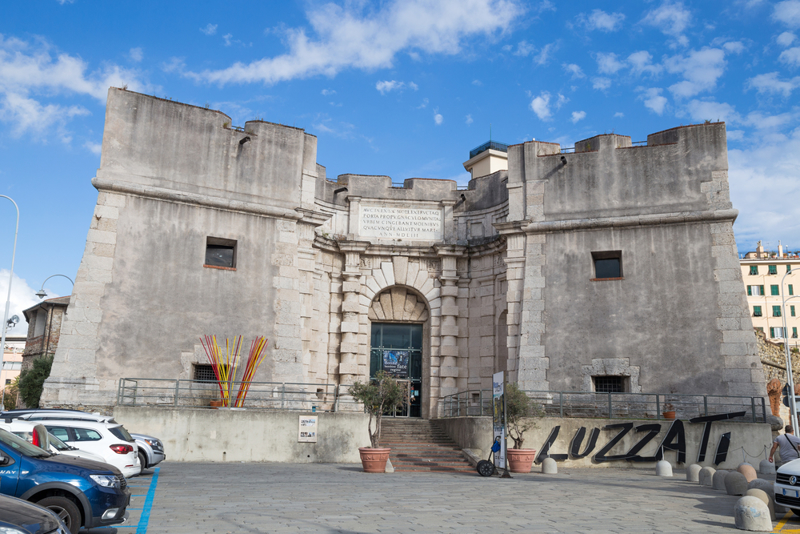 LUZZATI MUSEUM
Porto Antico, 6
The Luzzati Museum, located in the spaces of the sixteenth century Porta Siberia in the Port of Genoa, is dedicated to the work of Emanuele Luzzati - illustrator, set designer and designer Genoese famous all over the world - and host works by the artist.
www.museoluzzati.it
Excursions 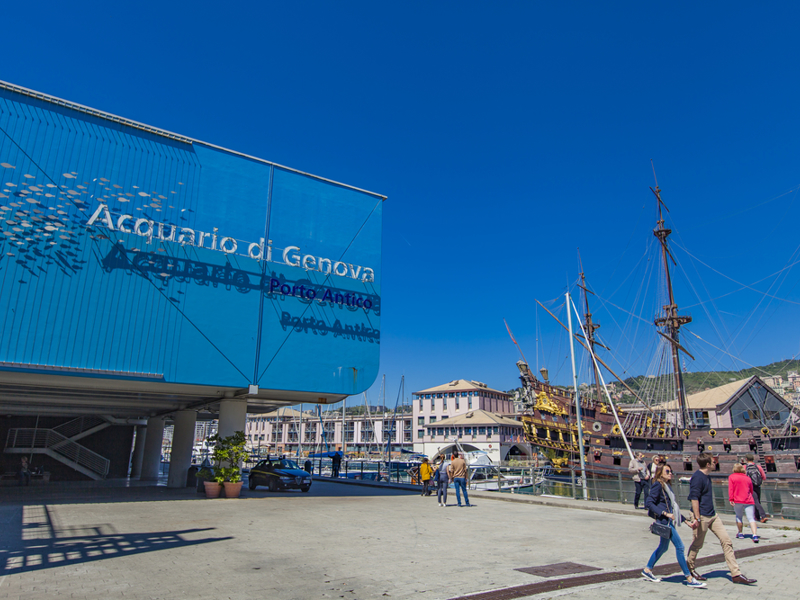 AQUARIUM OF GENOA
Ponte Spinola
The Aquarium of Genoa offers the discovery of the aquatic environments of the planet and all its inhabitants: manatee, seal, penguins, jellyfish, dolphins, sharks, fish of Antarctica, colorful fish of coral reefs in one of the largest exhibitions of European biodiversity. Is possible to see over 15,000 animals of 400 species of fish, marine mammals, reptiles, amphibians and birds.
www.acquariodigenova.it 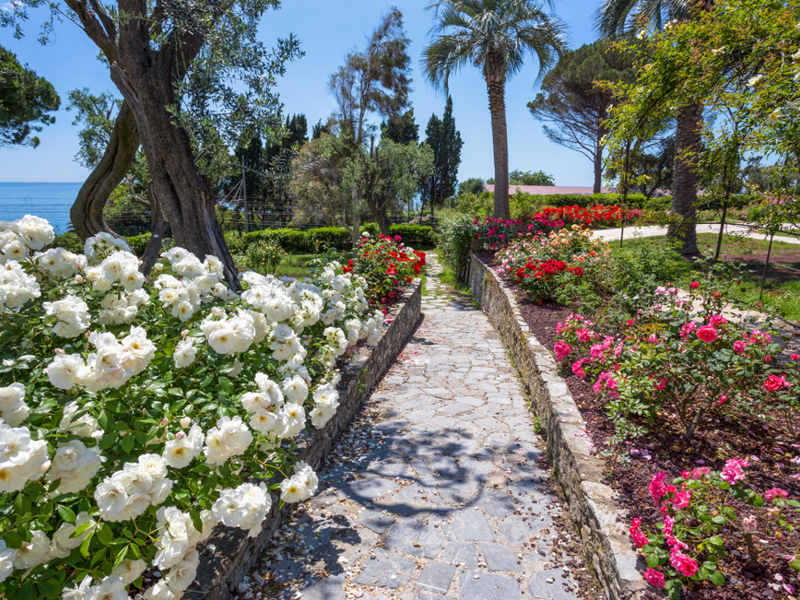 PARKS OF NERVI
Via Capolungo, 1
The Parks of Nervi develop between the Anita Garibaldi promenade and the ancient Roman road. Nine acres of parks, characterized by Mediterranean essences and exotic, surrounding three ancient noble villas: Gropallo, Saluzzo Serra and Grimaldi Fassio turned into museums open to the public thanks to their important art collections. The lawns of the parks down to the sea and are crossed by trails that offer views of the cliffs.
www.museidigenova.it
Advertising 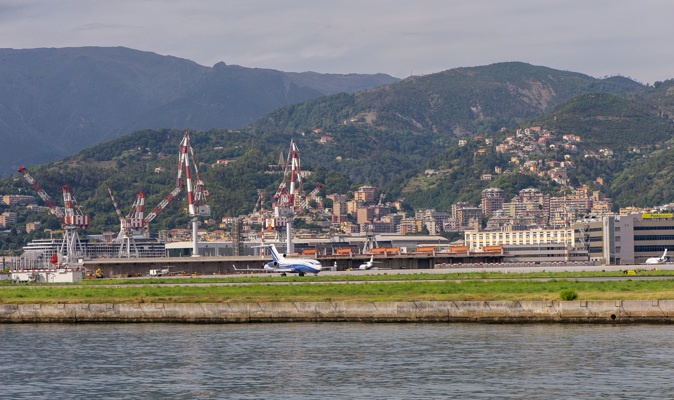