Pisa
Where to go
Near by
Airports
A "miraculous" city
The Pisa square with the city’s most symbolic monuments, which also attract the greatest number of tourists, is known as ‘Piazza dei Miracoli’ (Square of Miracles). Today a UNESCO world heritage site, it is home to the Cathedral, the Baptistery, the Camposanto Monumentale (Holy Field) and the Bell Tower, better known as the Leaning Tower.
The square was given this name by Gabriele D’Annunzio to highlight the wonder of having so many gleaming white Carrara marble monuments situated close together. Due to its artistic treasures dating back to the thirteenth and fourteenth centuries, the city is considered an originator of the Renaissance, which then spread throughout the whole of Tuscany. 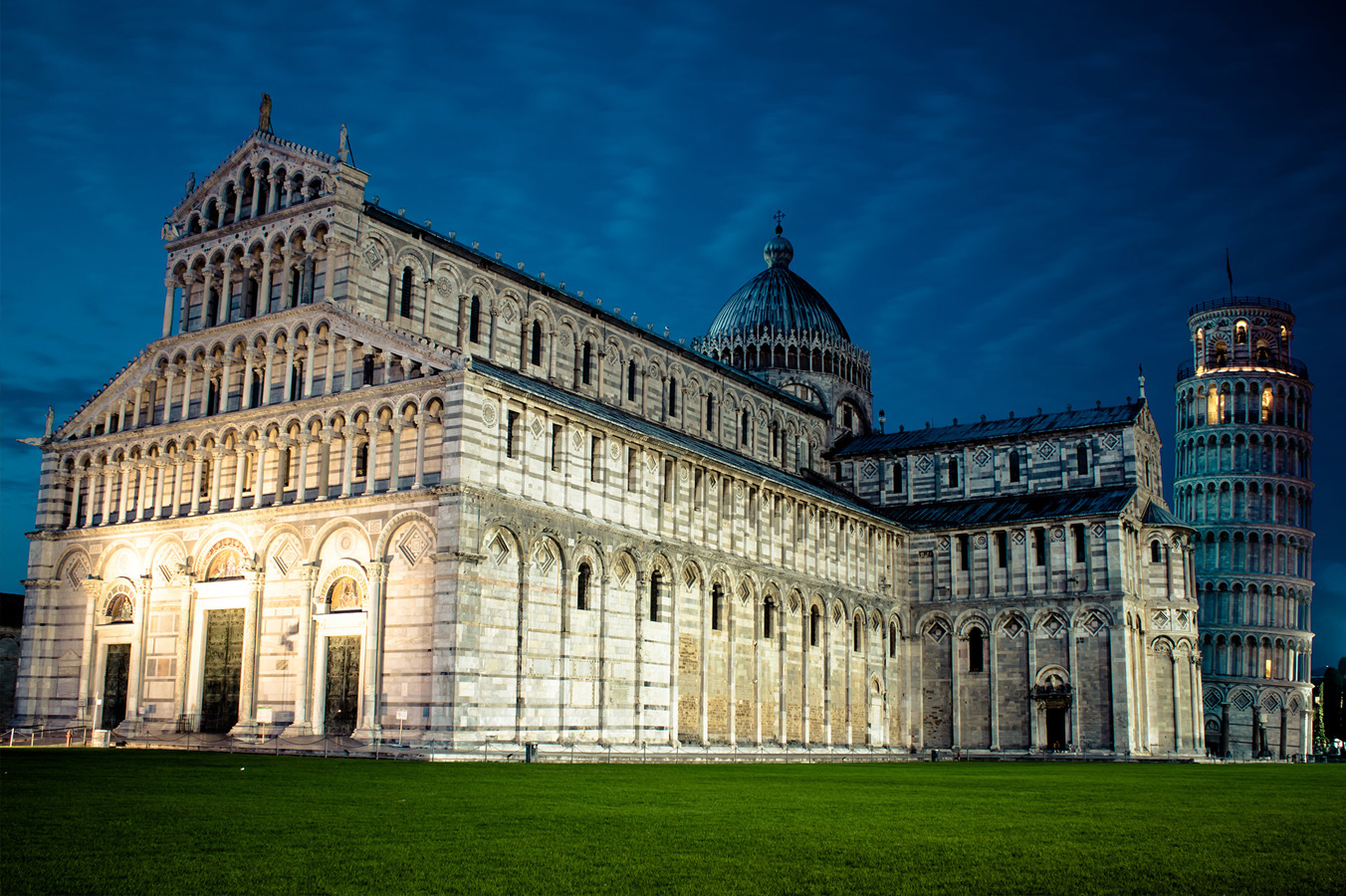 Pisa. Photo: Copyright © Sisterscom.com / Shutterstock
Pisa was also one of the most prosperous marine republics because it was equipped with a port. It developed on the mouth of the River Arno and was improved and embellished primarily in the fourteenth century by renowned artists such as Nicola and Giovanni Pisano, who with their genius revolutionised the art of sculpting, making it more elastic and flowing.
All monuments in the square lean due to the shallow foundations and sandy silt subsoil, even though their lean is not as obvious as on the tower. Interesting features of the Cathedral, which was constructed in Pisano Romanesque style and dedicated to St. Mary of the Assumption, are Moorish elements such as marble inlaid with geometric Arabesque designs - an evident legacy of trading links with Islamic countries - motifs that alternate with thin Romanesque colonnades and Gothic pinnacles. 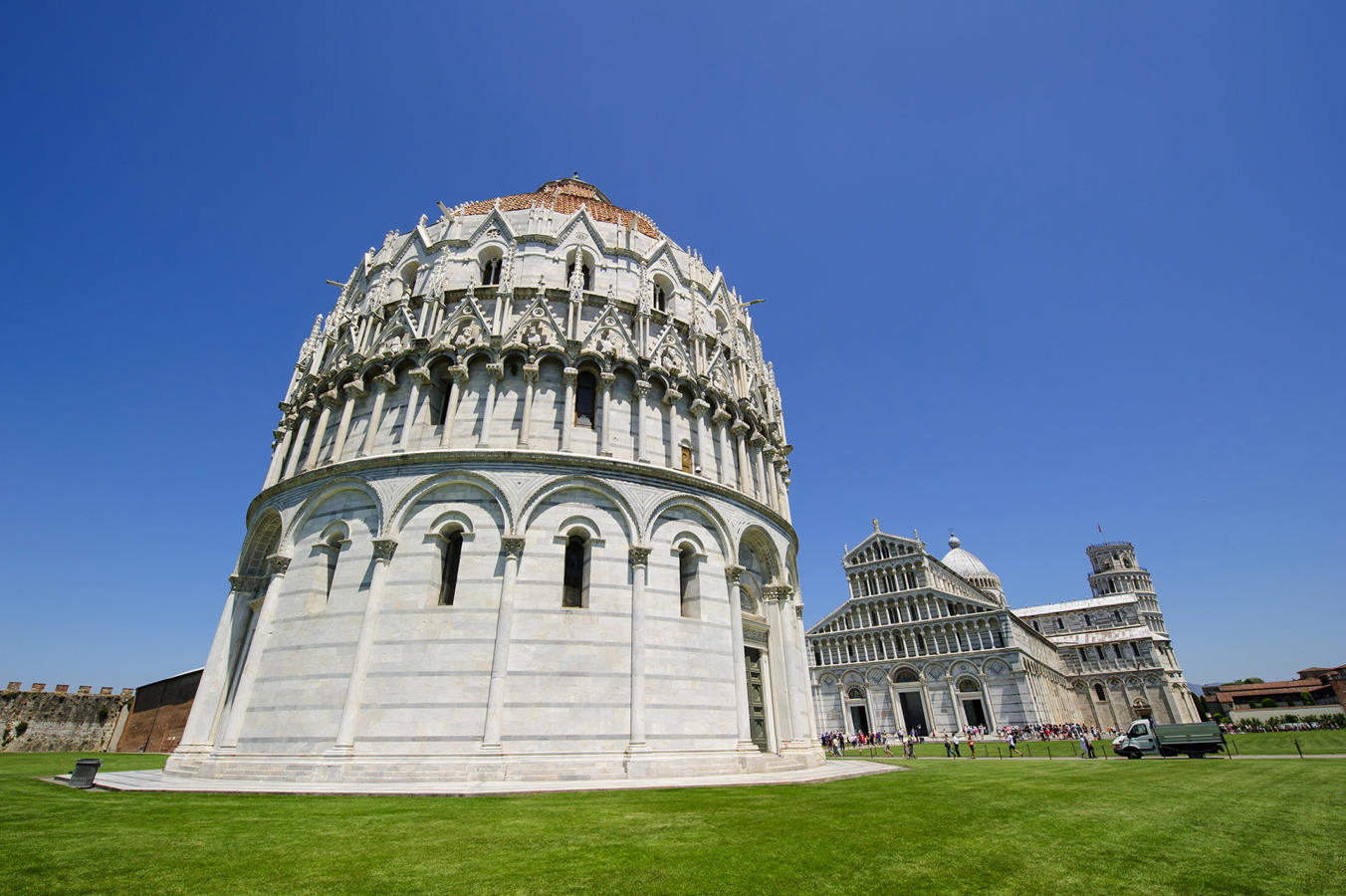 Pisa. Photo: Copyright © Sisterscom.com / Shutterstock
The nearby Baptistery, the largest in Italy, holds a magnificent marble pulpit, the work of Nicola Pisano, which was sculpted with realistic scenes of the life of Christ. The Monumental Cemetery, another priceless architectural monument, contains Roman sarcophagi and tombs of celebrated men, and was apparently built around a handful of earth brought back from the Holy Land by the Crusades. 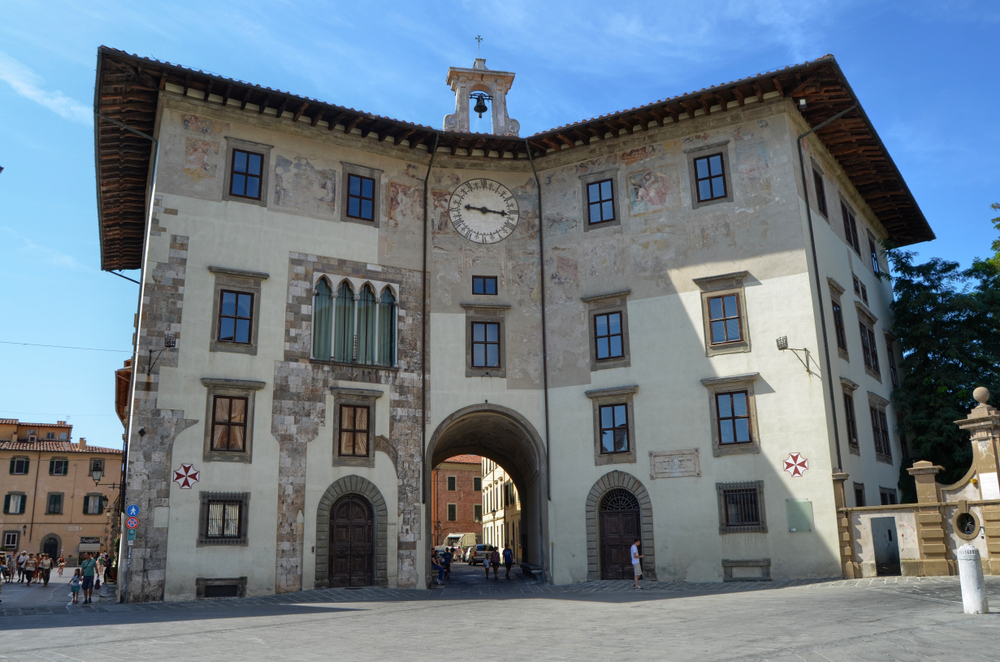 Piazza dei Cavalieri, Pisa. Photo: Copyright © Sisterscom.com / Shutterstock
The Normale
But Pisa is not all about the famous square; it is also a lively city due to the presence of numerous students who attend the University, the most prestigious of which is considered the Scuola Normale situated in the striking Piazza dei Cavalieri, a centre of excellence that has produced illustrious men in the fields of science, literature and art. This university dates back to 1810 and was established by Napoleonic decree when Bonaparte wanted to set up a university in the city modelled on the Ecole Normale Superiéure of Paris.
Riversides
The lungarni (riversides) come alive particularly in the evening and are full of bars, pubs and nightclubs, as well as lights that enhance the beauty of the buildings overlooking the river. From these exquisite buildings views can be enjoyed of the five bridges that cross the Arno, but also of the river boats that sail along it. 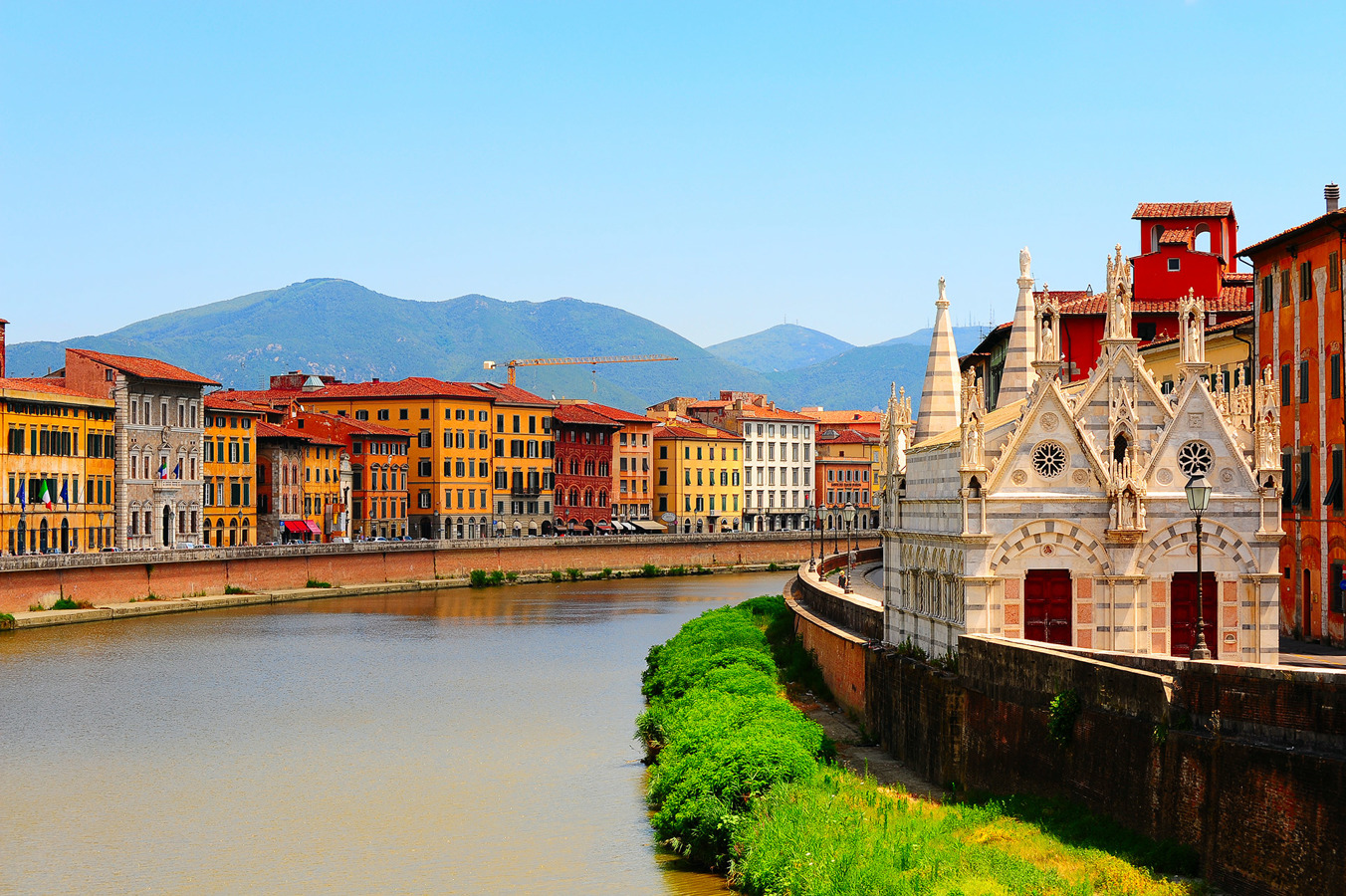 Pisa. Photo: Copyright © Sisterscom.com / Shutterstock
The city is splendidly lit during the great Luminara on 16 June, the evening before the festival of the patron saint St. Ranieri, a festival that has remained unchanged for centuries. On this occasion the city relives its ancient traditions with the Gioco del Ponte (Battle on the Bridge), one of the main historic events of Tuscany, during which the various districts challenge each other on the Ponte di Mezzo.
The Museums
Worthy of a visit on the Lungarno Mediceo is the Museo Nazionale di San Matteo, which houses important collections of Medieval Pisan paintings and sculpture. The Church of San Sepolcro, which has an octagonal layout based on that of the Church of the Holy Sepulchre in Jerusalem, is found on the Lungarno Galilei, which was named after the great Pisan scientist, who also gives his name to the airport.
Another interesting place is the Museo di Storia Naturale dell’Università (University Natural History Museum), which is located in the beautiful Certosa or Charterhouse, an old monastery rebuilt at the end of the eighteenth century in late Baroque style. To the north of the River Arno lies the Tenuta di San Rossore, part of the vast nature reserve of the same name, where deer and wild boar roam undisturbed in the shade of a large forest of pine trees. But in other areas around the city, hunting is practised and many local dishes are based on these ingredients, such as wild boar stew, and hare and pheasant stew. 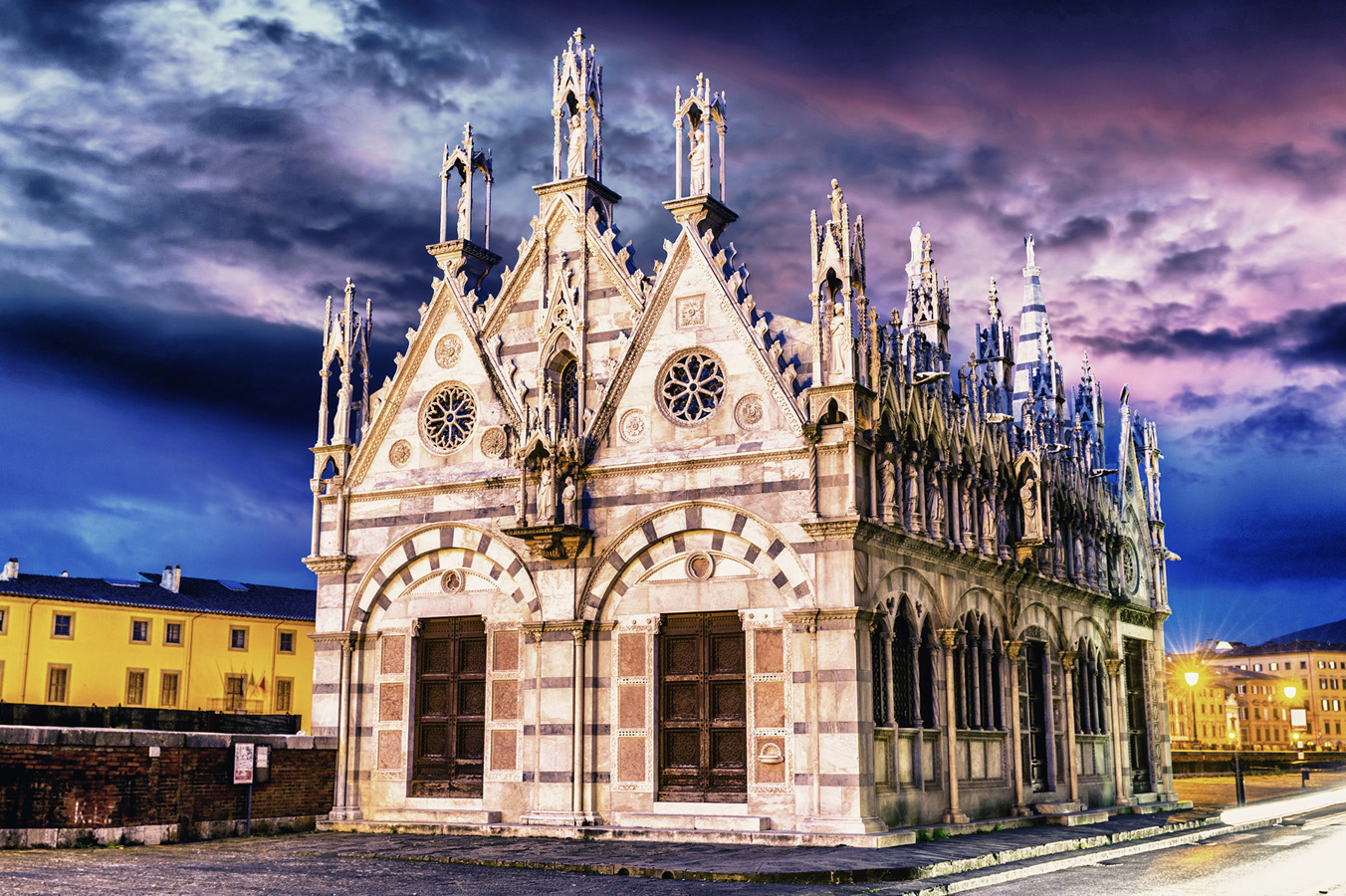 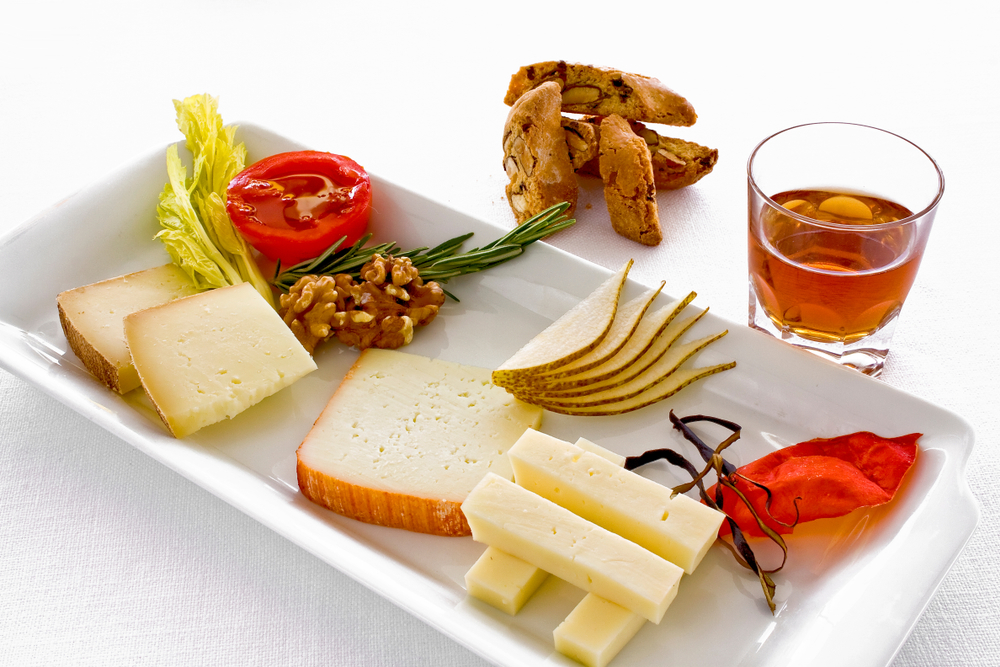 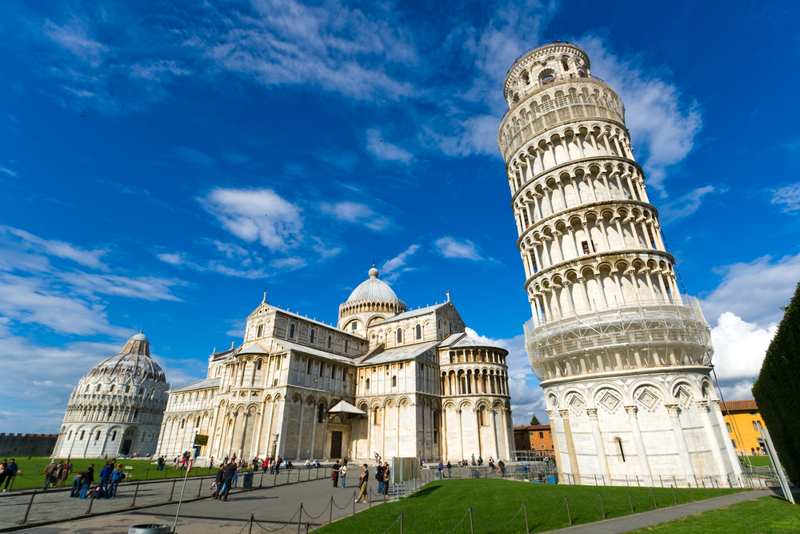 Copyright © Sisterscom.com / Shutterstock
SQUARE OF MIRACLES
Piazza del Duomo or Piazza dei Miracoli houses the four most important monuments of Pisa: the Baptistery, the Camposanto Monumentale, the Cathedral of Santa Maria Assunta and the Bell Tower or Tower of Pisa, famous all over the world for its particular slope. 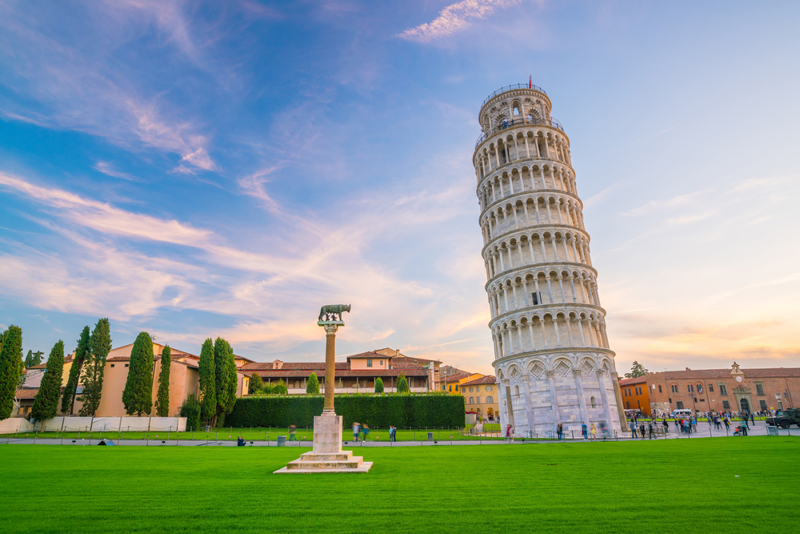 Copyright © Sisterscom.com / Shutterstock
BELL TOWER
The first construction works of the bell tower of the Cathedral of Santa Maria Assunta date back to 1173. The Tower of Pisa is a bell tower about 56 meters high and weighing 14,453 tons. The direction of the work was probably by the architect Diotisalvi. 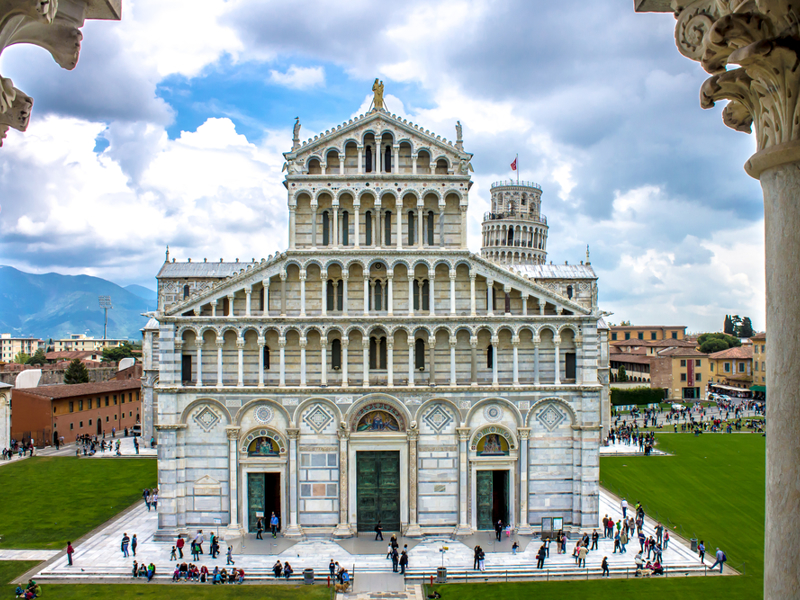 Copyright © Sisterscom.com / Shutterstock
CATHEDRAL OF ST. MARY OF THE ASSUMPTION
The Romanesque Cathedral in Piazza dei Miracoli was founded in 1064 and its construction site was directed until 1100 by the architect Buscheto, while Rainaldo took care of its completion. The basilica has a Latin cross plan, with five naves and a facade with arcades, columns and capitals. 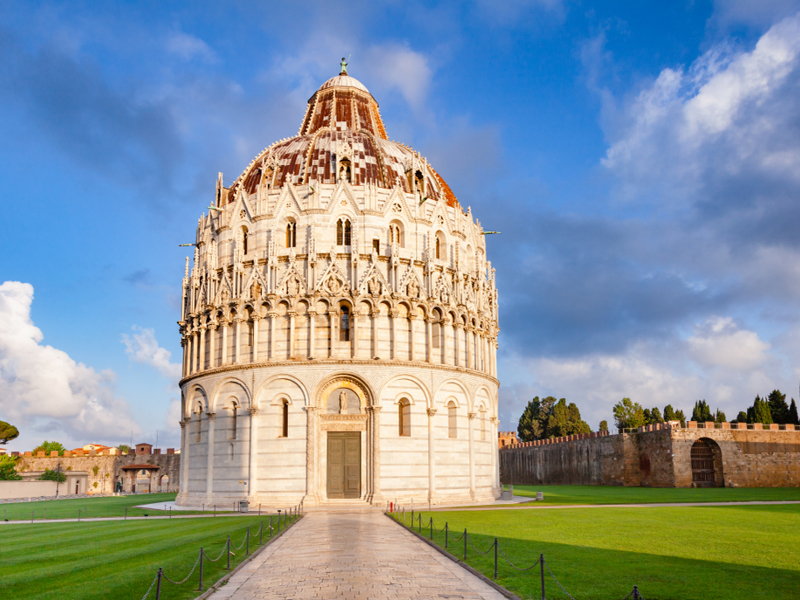 Copyright © Sisterscom.com / Shutterstock
BAPTISTERY OF ST. GIOVANNI BATTISTA
The baptistery dates back to 1152 and its construction lasted over two centuries, initially directed by the architect Diotisalvi then by Guidetto and by 1260 by Nicola Pisano. The circular building is surmounted by a dome with the statue of St. John, made in 1395 by Turino di Sano from Siena. 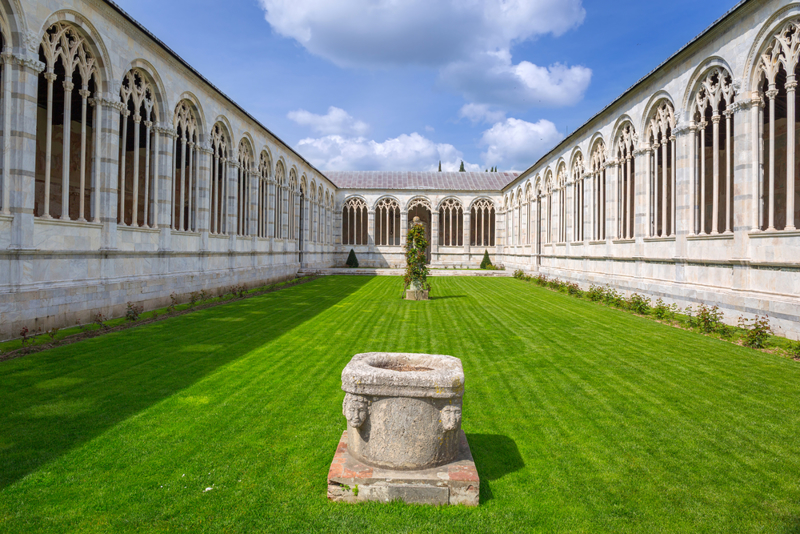 Copyright © Sisterscom.com / Shutterstock
HOLY FIELD
The Camposanto of the Cathedral of Pisa, started in 1277 by Giovanni di Simone, is the last of the monumental buildings of the Piazza dei Miracoli in Pisa. Born as a cemetery to collect sarcophagi and burials, it has an exterior made of white marble and characterized by 43 blind arches and two doors. 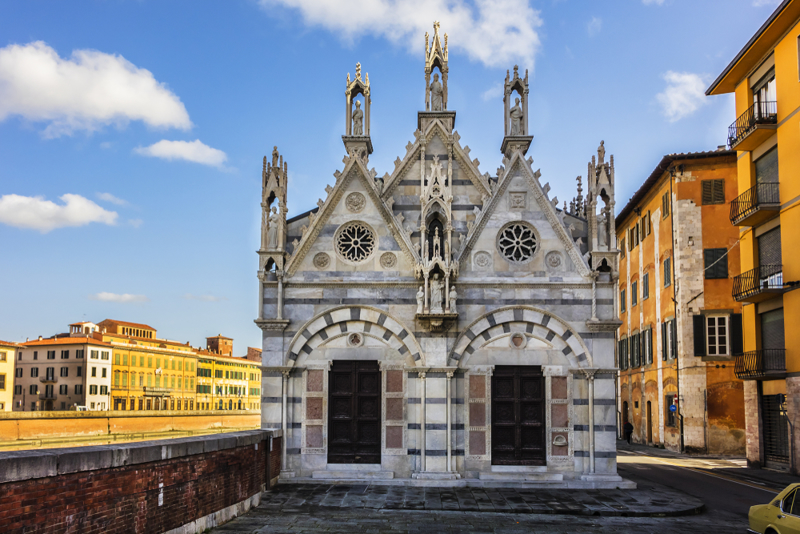 Copyright © Sisterscom.com / Shutterstock
CHURCH OF ST. MARIA DELLA SPINA
Founded in 1230, the church was originally a votive oratory. In the fourteenth century it underwent architectural interventions probably directed by Lupo di Francesco, an artist from Giovanni Pisano's workshop. The structure is characterized by gables, pinnacles, spiers and statues. Due to the subsidence of the land, in the mid-nineteenth century it was dismantled and rebuilt. 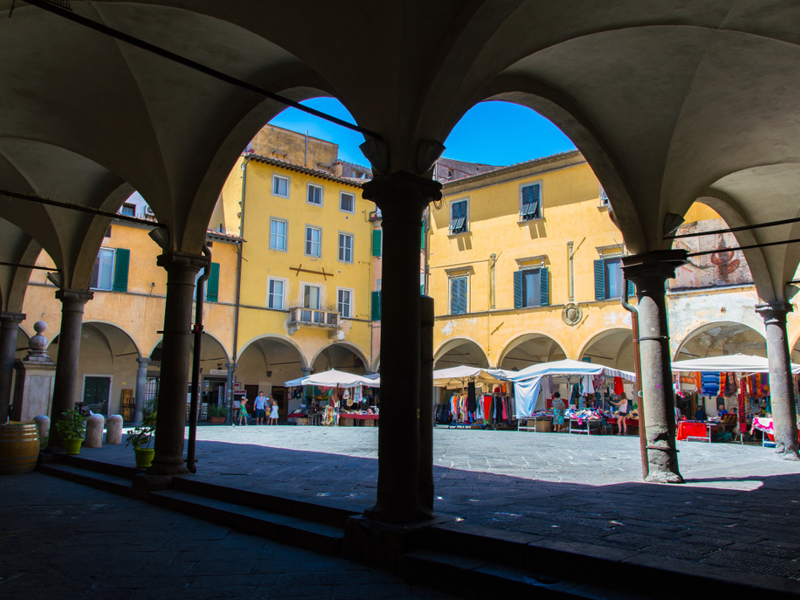 Copyright © Sisterscom.com / Shutterstock
PIAZZA DELLE VETTOVAGLIE
The Piazza delle Vettovaglie has a typical shape of an irregular quadrilateral with a loggia with round arches and supported by simple columns. The particular name of the square dates back to the eighteenth century when this area was used for the sale of various foodstuffs for the inhabitants of Pisa. 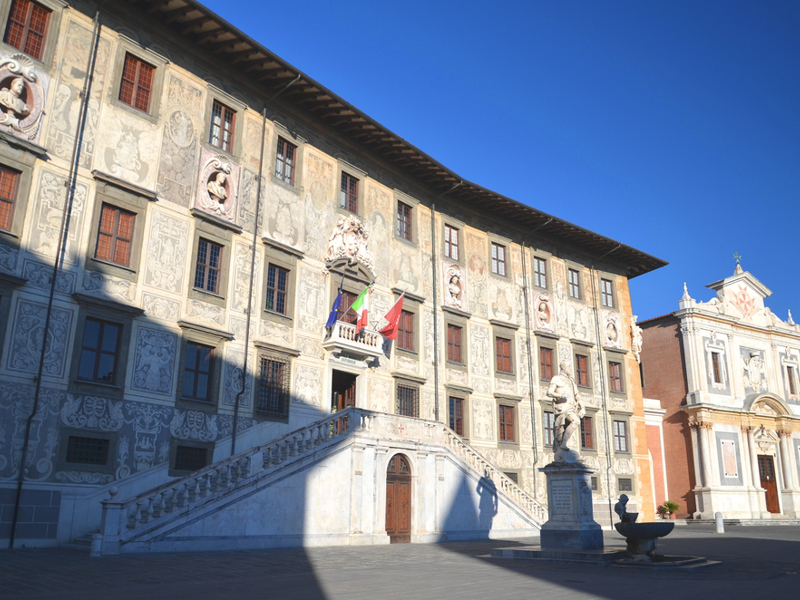 Copyright © Sisterscom.com / Shutterstock
PIAZZA DEI CAVALIERI and PALAZZO DELL'OROLOGIO
Palazzo dei Orologio overlooks Piazza dei Cavalieri and is characterized by the union of two medieval structures. In the sixteenth century, the complex was transformed into an infirmary and in 1696 the bell tower was inserted while in 1919 it was again restored and purchased by the Count della Gherardesca.
Museums 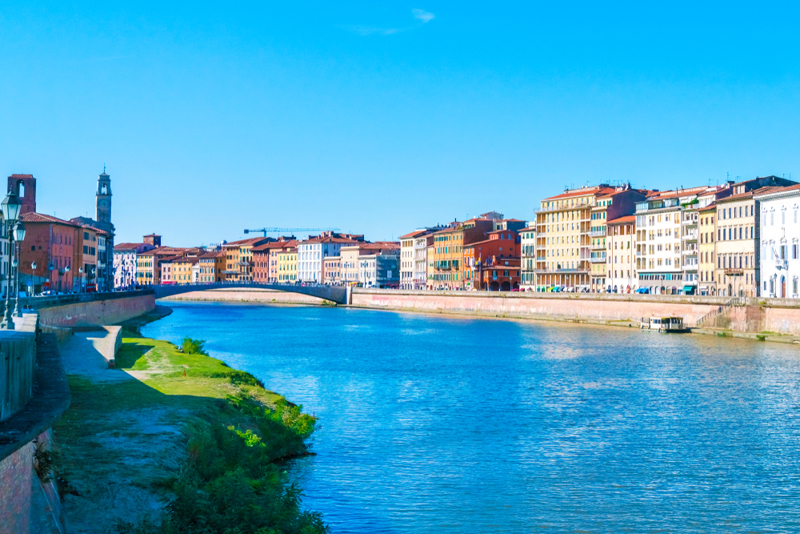 Copyright © Sisterscom.com / Shutterstock
LUNGARNO MEDICEO
The Lungarni Pisani run along the Arno river and are ideal for a walk in the city. The splendid aristocratic palaces and important museums of Pisa overlook the Arno river to be discovered in a single itinerary such as the Museum of Ancient Ships of Pisa, the National Museum of the Royal Palace, the National Museum of San Matteo, the Museum of Graphics and the Blue Palace. 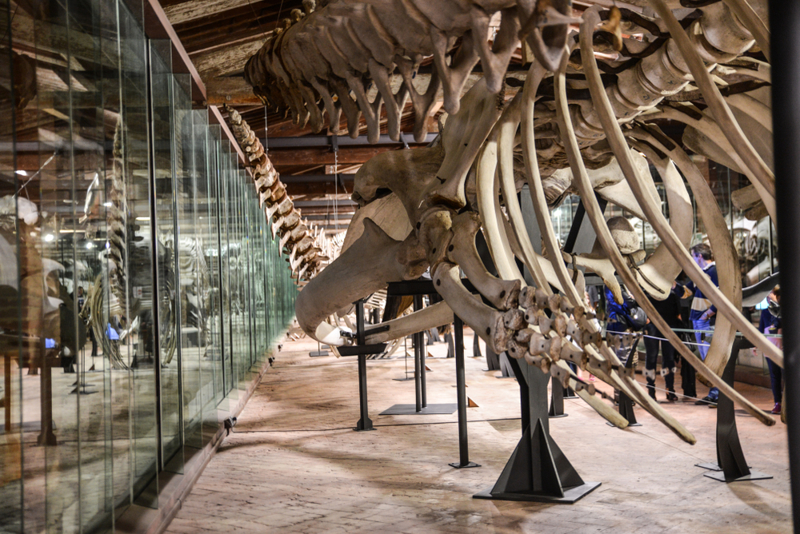 Copyright © Sisterscom.com / Shutterstock
NATURAL HISTORY MUSEUM OF PISA
The Natural History Museum of the University of Pisa dates back to the late 16th century. The museum is located at the Certosa di Pisa in Calci, a structure that dates back to the fourteenth century. The museum houses rooms dedicated to zoology, mineralogy, paleontology and also a freshwater aquarium with species of freshwater fish and tanks dedicated to the different fish fauna of the world.
Recommended tours 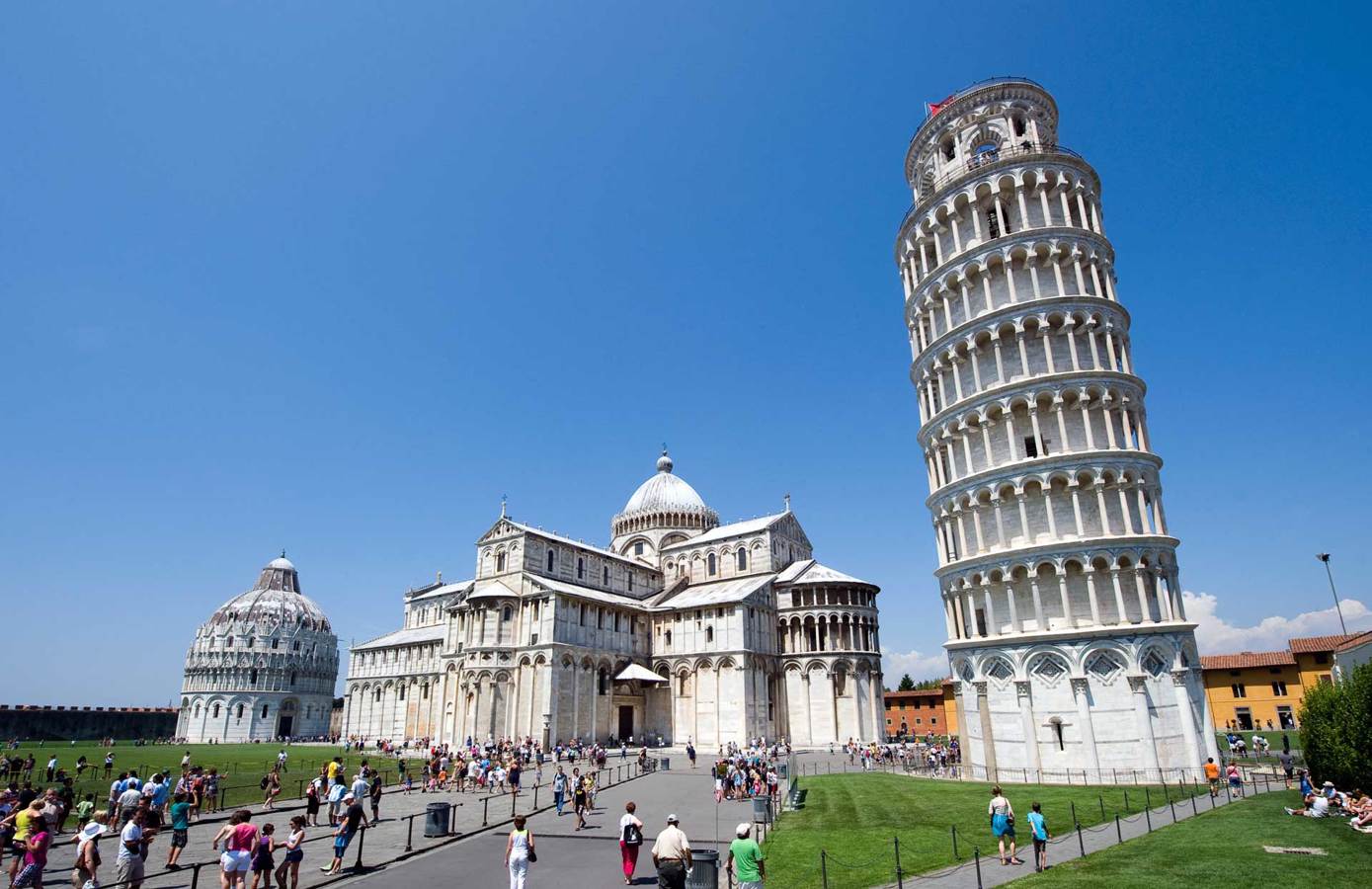 Pisa, Piazza dei Miracoli. Photo: Copyright © Sisterscom.com / Shutterstock
SQUARE OF MIRACLES
A guided tour to discover the Baptistery of San Giovanni Battista, the Cathedral of Santa Maria Assunta and the Leaning Tower in the Piazza dei Miracoli in Pisa with admission to all the monuments by jumping the queue. Discover the Tour. 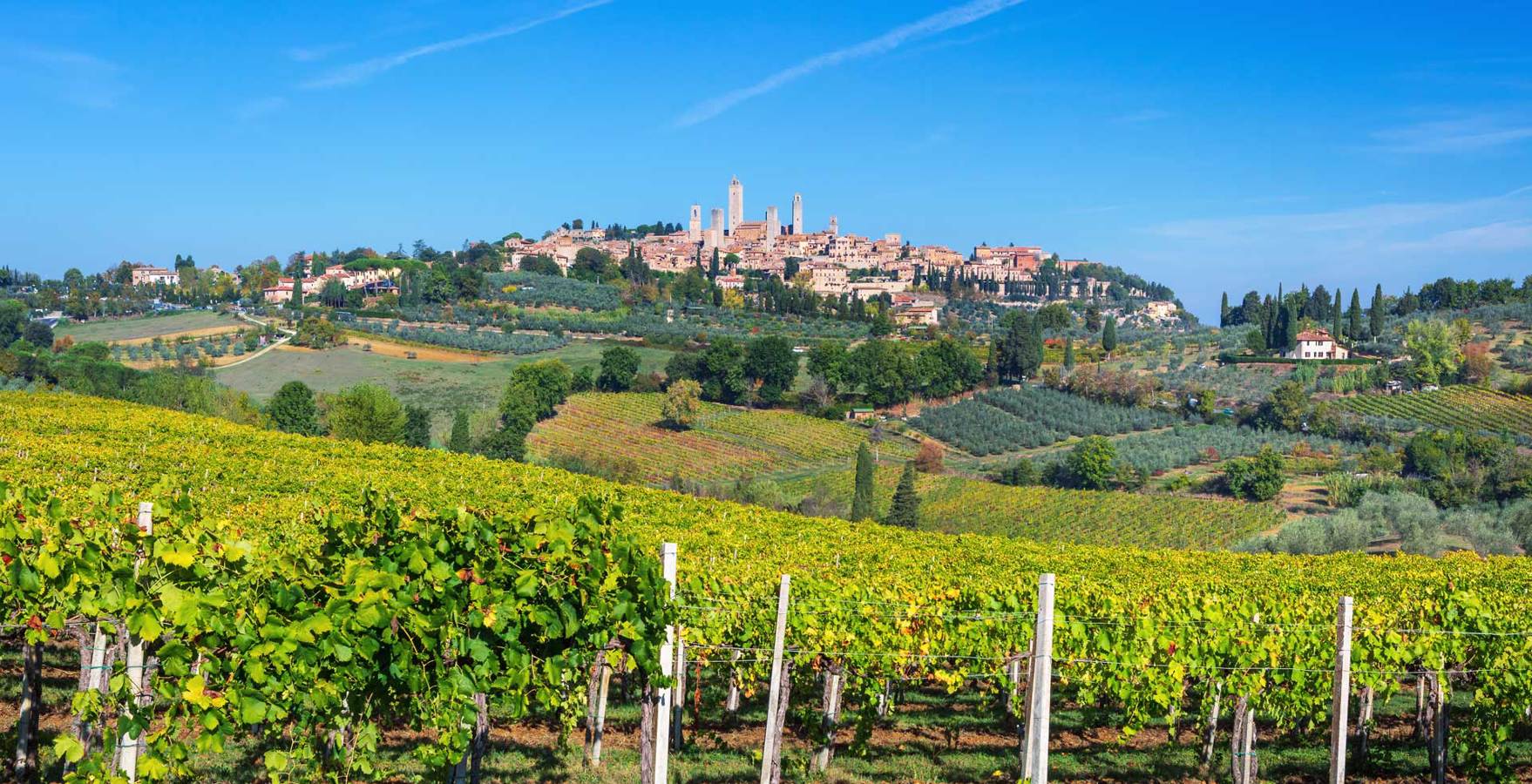 San Gimignano. Photo: Copyright © Sisterscom.com / Shutterstock
SIENA, SAN GIMIGNANO and WINE TASTING
Full-day tour from Pisa to Siena, San Gimignano and Chianti wine tasting. The tour includes the journey through the Tuscan countryside, the visit to the cities of Siena and San Gimignano and tasting of Tuscan wines in a farm-cellar. Discover the tour.
Discover all tours
Destinations found in the vicinity 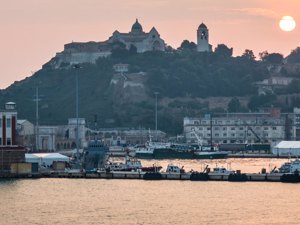 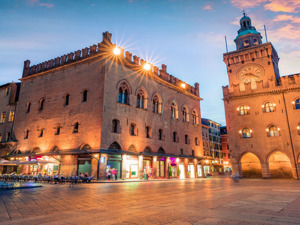