Cuneo
Where to go
Airports
The green capital of Piedmont
The Piedmont city of Cuneo (meaning wedge in Italian) owes its name to its unique geographical position. It lies on a triangular-shaped plateau and has a wedge form with the point embedded in the heart of the Piedmont plain, at the convergence of the Gesso torrent with the Stura River, and against the backdrop of imposing Mount Bisalta. Situated off the beaten track of mainstream tourist destinations, in a strategic position at the mouth of six valleys communicating with Liguria and France, Cuneo, nevertheless, reserves some extraordinary surprises for the visitor, not just in terms of scenery, but also for its historic buildings, some of which are very old. 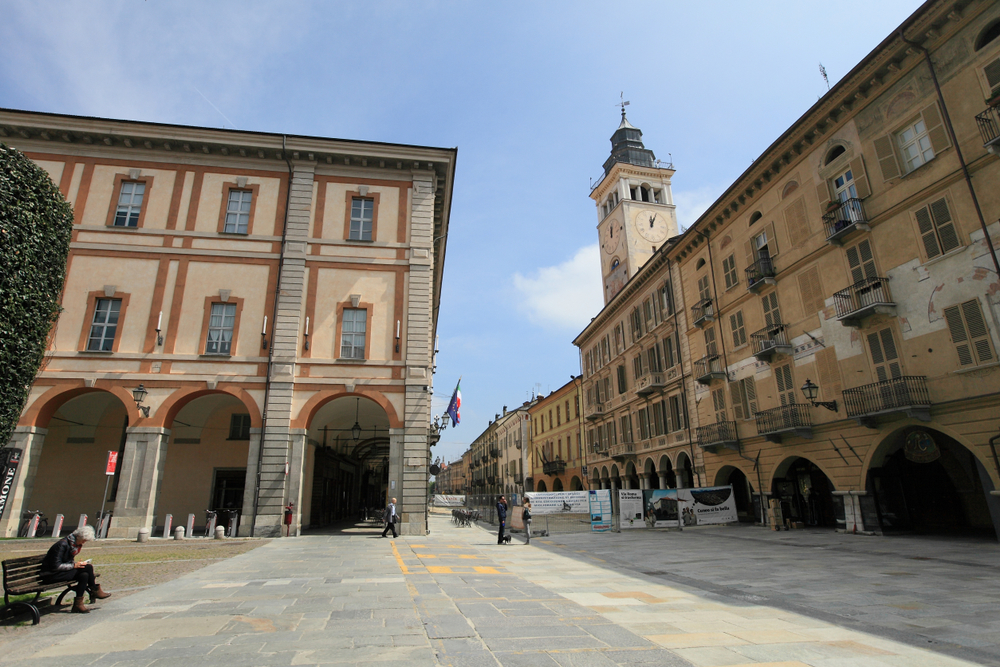 Founded in 1198 as an independent Commune, at first glance the city has the atmosphere of a fashionable gathering place, with its elegant porticoes that cover some eight kilometres, which seem to have been designed to welcome and entertain, as well as being the site of an open-air shopping centre. Each Tuesday, the old town is brought to life here by a traditional market, filled with hundreds of stalls selling every kind of product, from food and wine to clothing and even antiques.

The city’s past was often tormented: in the fourteenth century from an independent commune it passed under the rule of the House of Savoy, and over the following two centuries it had to defend itself against seven sieges – four from the nearby French – which led to a decline in commercial development and the destruction of several ancient monuments.
The historical building and churches 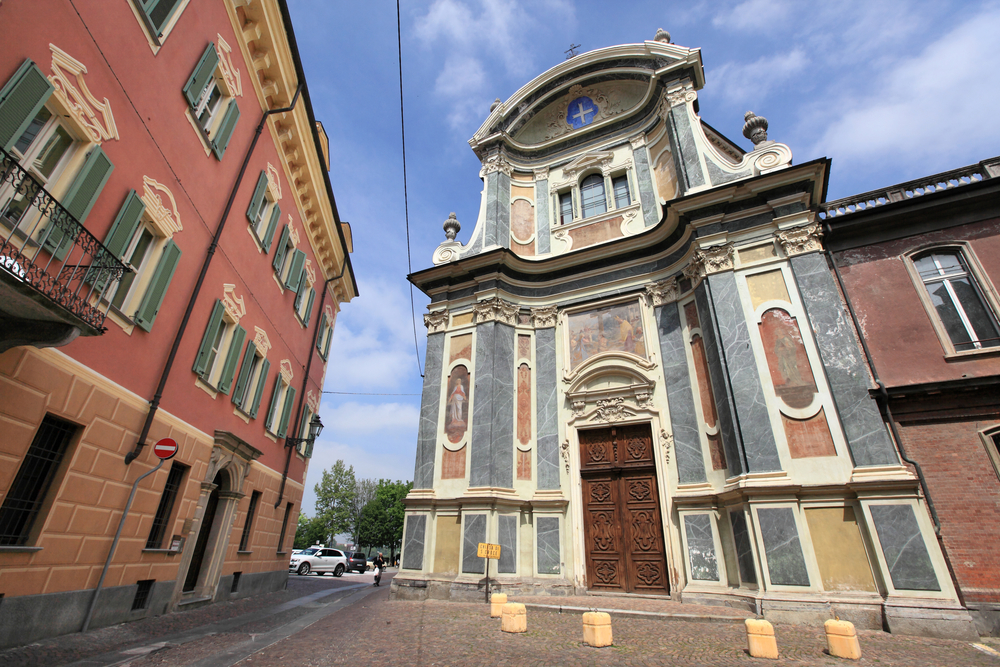 Churches of Santa Chiara and Santa Croce
Several imposing buildings line the main roads. These consist of religious buildings as well as institutional buildings such as the Palazzo del Municipio (City Hall), a former eighteenth-century Jesuit monastery and residence of nobility, while the secondary streets are embellished with gems such as the Churches of Santa Chiara and Santa Croce, the latter being a magnificent example of Baroque architecture designed by the architect Francesco Gallo.
There is also a Church dedicated to Sant’Ambrogio (Saint Ambrose), the patron saint of Milan, built to commemorate the assistance given to the city by the Milanese people, who helped rebuild it after it was destroyed by the Marquis of Saluzzo; this was due to the fact that, several decades earlier, the inhabitants of Cuneo had taken in and protected Milanese fugitives persecuted by the Emperor Federico Barbarossa. The church is considered to be the city’s most beautiful piece of architecture.
Not far from the Catholic churches is a beautiful Synagogue in the former Jewish ghetto of Contrada Mondovì. These buildings are all gems that, together with the Teatro Toselli and the medieval buildings of Piazza Virginio, make up the most important monumental complex of the city. 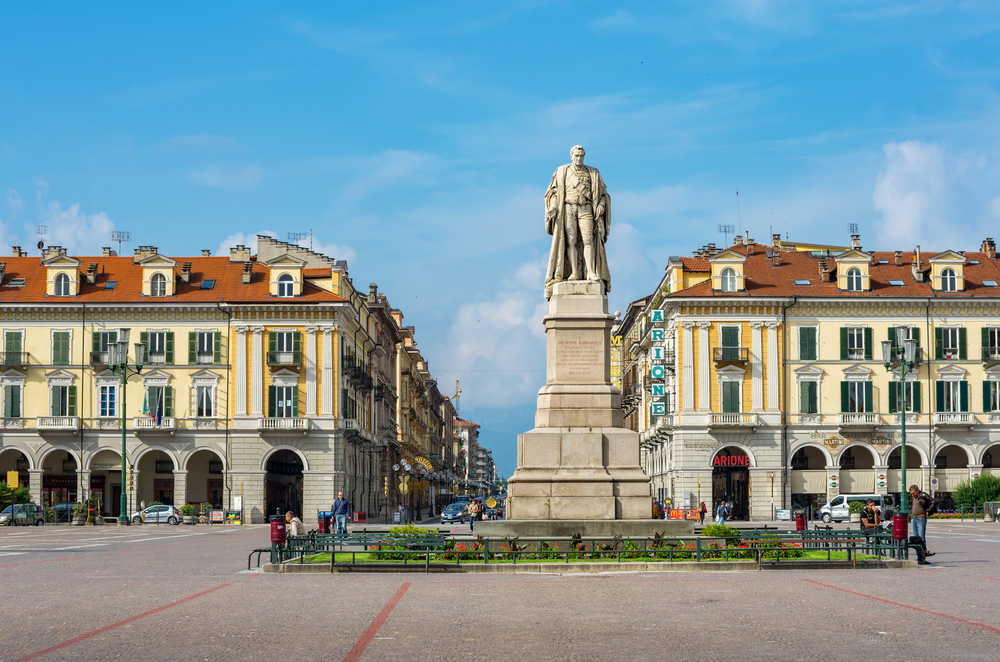 Piazza Galimberti
Piazza Galimberti
But the best loved square of the people of Cuneo is Piazza Galimberti, dedicated to one of its bravest inhabitants, a hero of the Resistance who was given the Gold Medal of Military Valour: the Partisan Tancredi Galimberti, known as Duccio, who was captured and cruelly tortured and finally killed during the fight against the Germans and fascism.  The Tancredi House and Museum is also very interesting and impressive from a historical point of view.
Cuneo is also considered the green capital of Piedmont for its numerous parks and gardens that extend to the base of the ancient walls; walls that were demolished during the Napoleonic era to create more space for urban development.
The city is famous for its numerous social, gastronomic and cultural events held throughout the year. The main ones include the Fiera Nazionale del Marrone (National Chestnut Fair), typical produce of the area, which takes place in October, and Scrittorincittà, in November, a popular festival with hundreds of participants from all over Italy discuss the theme of the event. Since 1999, the year of its inauguration, this literary festival has discussed topics such as ‘literature between north and south’, ‘travel’, ‘dreams’ and ‘passions’.
Food and wine products
The quality products of this region are numerous and excellent as:
Testi di Anna Glik
Foto: © Sisterscom.com Shutterstock
Video: www.comune.cuneo.gov.it
Copyright © Sisterscom.com
Pubblicato giugno 2018
Tourism Board
www.comune.cuneo.gov.it
www.visitpiemonte.com 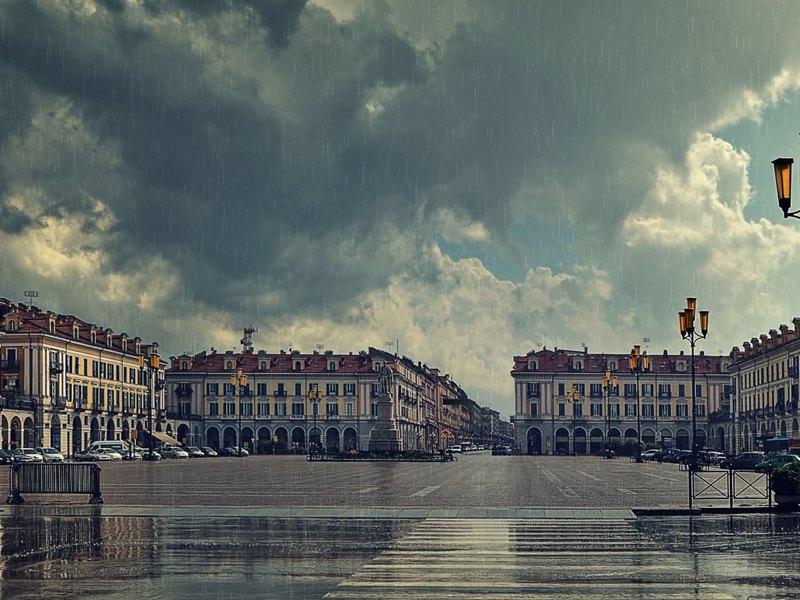 Where to sleep in Cuneo

Cuneo is a welcoming city and offers different possibilities for accommodation. To find the ideal hotel and the best offers you can do a search for the stars but also for districts or landmarks.

Stars
Hotels for stars, differentiated by type of services:
Hotels in historic centre
Hotels near the airport 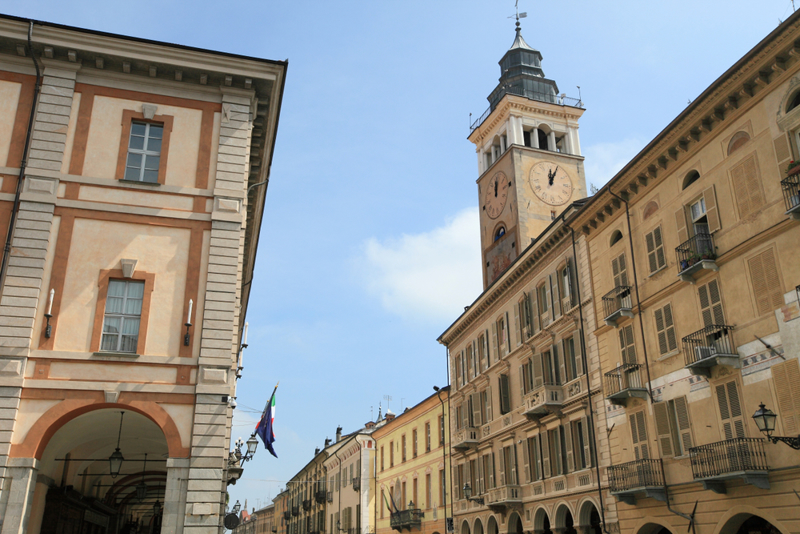 CIVIC TOWER
The tower, with a square base, is located in the old town overlooking the city. The tower was built in 1317 following the peace for the conclusion of the struggles between nearby Mondovi and Cuneo, twin cities founded in 1198. From the top of the Tower, you can enjoy a wonderful panorama opens on the gentle hills of the Langhe until peak of Monte Rosa. 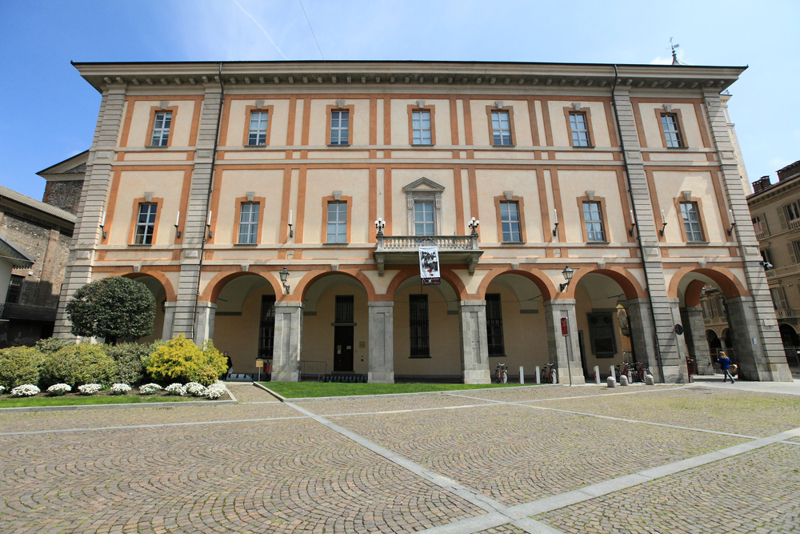 CITY HALL
The town hall is located in a former Jesuit monastery, dating from the seventeenth century. Along the walls of the "grand staircase" there are several gravestones including that of 1952 with the words of Piero Calamandrei on the permanent value of the Resistance. At the end of the staircase opens, on the left, the main hall of the town hall where stands the painting depicting the King Vittorio Emanuele II at the Battle of Saint Lucia of 1859. 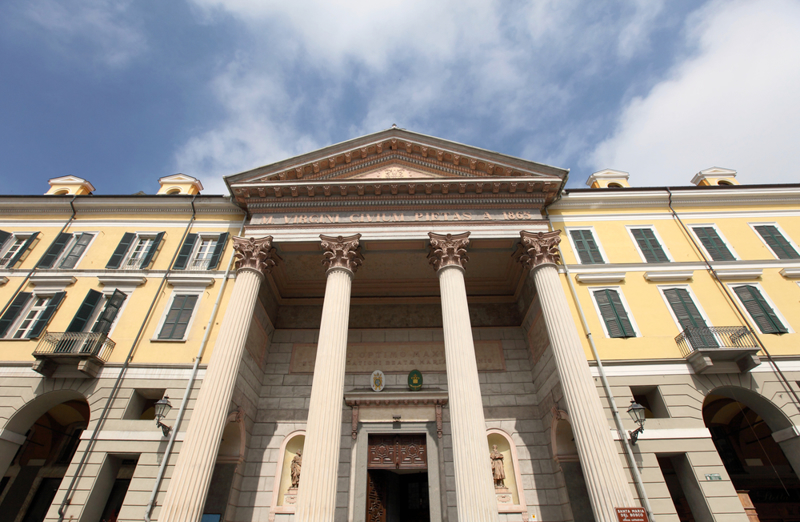 SANTA MARIA DEL BOSCO CATHEDRAL
Even before the founding of the city there was a church that, over the centuries, was repeatedly restored and rebuilt. The current cathedral, dedicated to Santa Maria del Bosco, was born from the reconstruction took place between 1657 and 1660. The imposing facade with four Corinthian columns was performed later in 1865. Inside, the cathedral houses the Treasury of the Diocese and many works of art on display in some of the chapels. 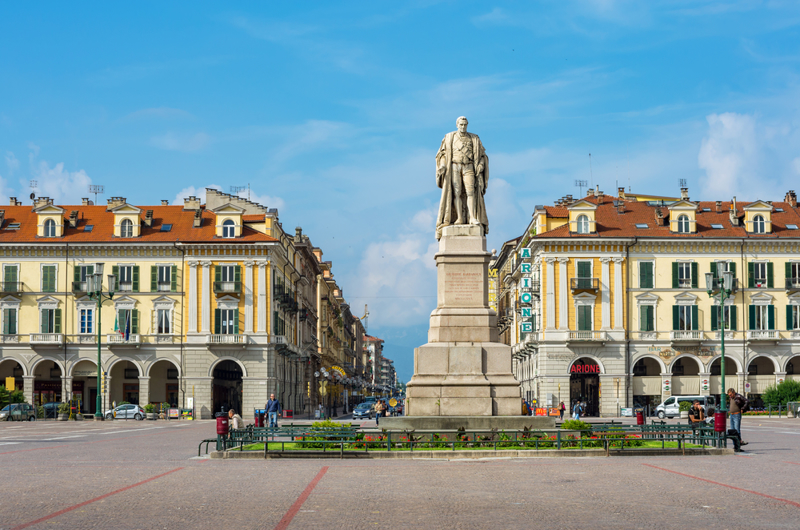 DUCCIO GALIMBERTI SQUARE
The Piazza Duccio Galimberti is the "living room" of the city of Cuneo. With an area of almost 24,000 square meters every Tuesday is transformed by the renowned market that attracts people not only from all the surrounding areas, but also from Liguria and neighboring France. The square is surrounded by ten buildings, connected by terraces. In 1945 it was named at National Hero of the Italian Resistance, Tancredi (Duccio) Galimberti, born in Cuneo in 1906 and killed by the fascists in 1944.
Museums
MUSEUM AND MONUMENTAL COMPLEX OF SAN FRANCISCO
The Museum is located in the monumental complex of San Francesco, including the former convent and the adjoining Church. The building was classified as a national monument and rare architectural testimony of the Medieval era of the city. Inside meander different itineraries, from the most ancient evidence of prehistoric to the modern age, that tell the history of the area.
CASA GALIMBERTI MUSEUM
The Casa Galimberti Museum is located on the second floor of Palazzo Osasco, where was the private house and studio of Tancredi Galimberti senior first and, later, Tancredi Galimberti junior ("Duccio", hero of the Resistance). Offers a journey through history, in the nineteenth and twentieth centuries, and the knowledge of the family Galimberti.
DIOCESAN MUSEUM
The Diocesan Museum is located in the historic center of the city. The staging of exhibitions focuses on the works of the complex of San Sebastiano through the devotions of the ancient Brotherhood, and offers with moments of spirituality, history and society. The museum features information panels, detailed captions and movies.
Excursions 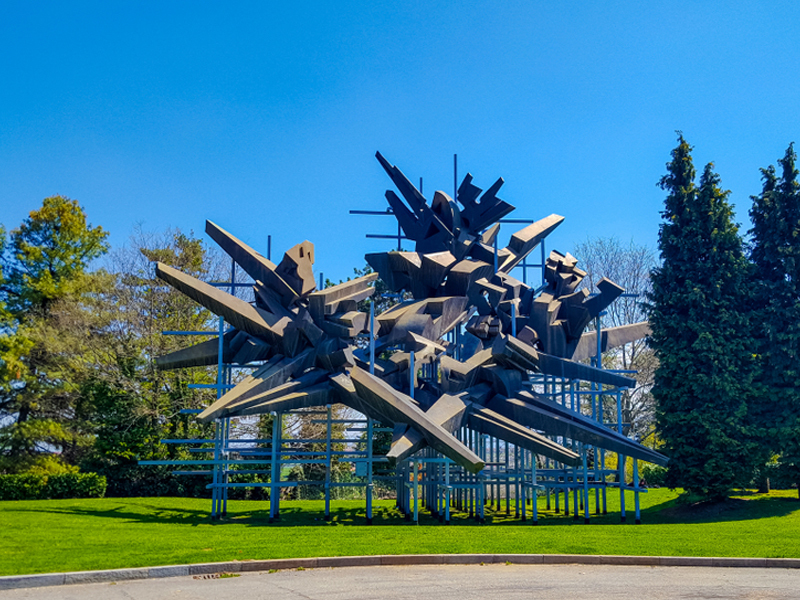 PARK and AVENUE OF ANGELS
In the end of Corso Dante, there is a large park with the imposing bronze monument dedicated to the Italian Resistance, by the sculptor Umberto Mastroianni, inaugurated on 7 September 1969. On the right and left of the park, there is the Avenue of the Angels. The avenue, wanted by the City Council in 1720 to connect the city with the Church and the Franciscan Monastery of Our Lady of the Angels, is three kilometers long and it is the place of relaxation for the inhabitants of Cuneo. 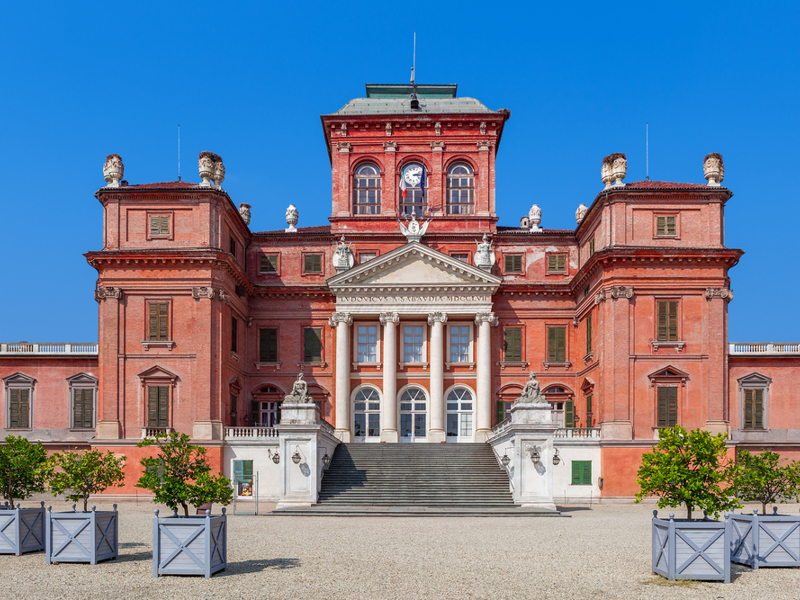 RACCONIGI
In Racconigi, land of Savoy, near Cuneo, there is the Castle of the Savoy a jewel of Baroque art. The Castle, property of the Savoy from 1418 served as a place of recreation for the prince and the control center of the surrounding territory. The visit of the castle takes place on the first floor, the second floor apartment, the royal chapel and the kitchens; the residence also overlooks a beautiful park of 170 hectares and is open in summer during holidays.
You might be interested in 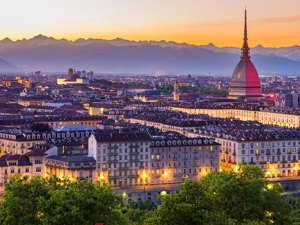