BLQ Airport
Bologna
The airport
How to get there
Near by
Bologna Airport, named after the physicist and inventor Guglielmo Marconi, is one of the most important airports in Italy in terms of the number of destinations served, with a runway that is able to welcome flights with a range of up to 5,000 nautical miles. Bologna Marconi Airport serves a catchment area of 10 million people. The airport is equipped with a single runway (lengthened in the summer of 2004) of 2,803 m. In the years 2011-2013, plans to redevelop and expand the terminal were set in motion. The airport will increase from 31,100 m2 to 36,100 m2, and the number of gates and security check lanes will also be increased; there will also be a new, single check-in area and new piers. The airport is 6 km from the city centre of Bologna.
INFORMATION
Management company: Aeroporto Guglielmo Marconi di Bologna S.p.A.
Address:  Via del Triumvirato, 84 - 40132 Bologna (Italy)
Telephone no.: +39 051 6479615
Website: www.bologna-airport.it
TECHNICAL DATA
IATA Code: BLQ
ICAO Code: LIPE
Country code: IT
Flights 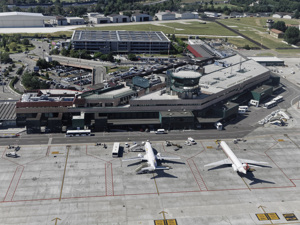