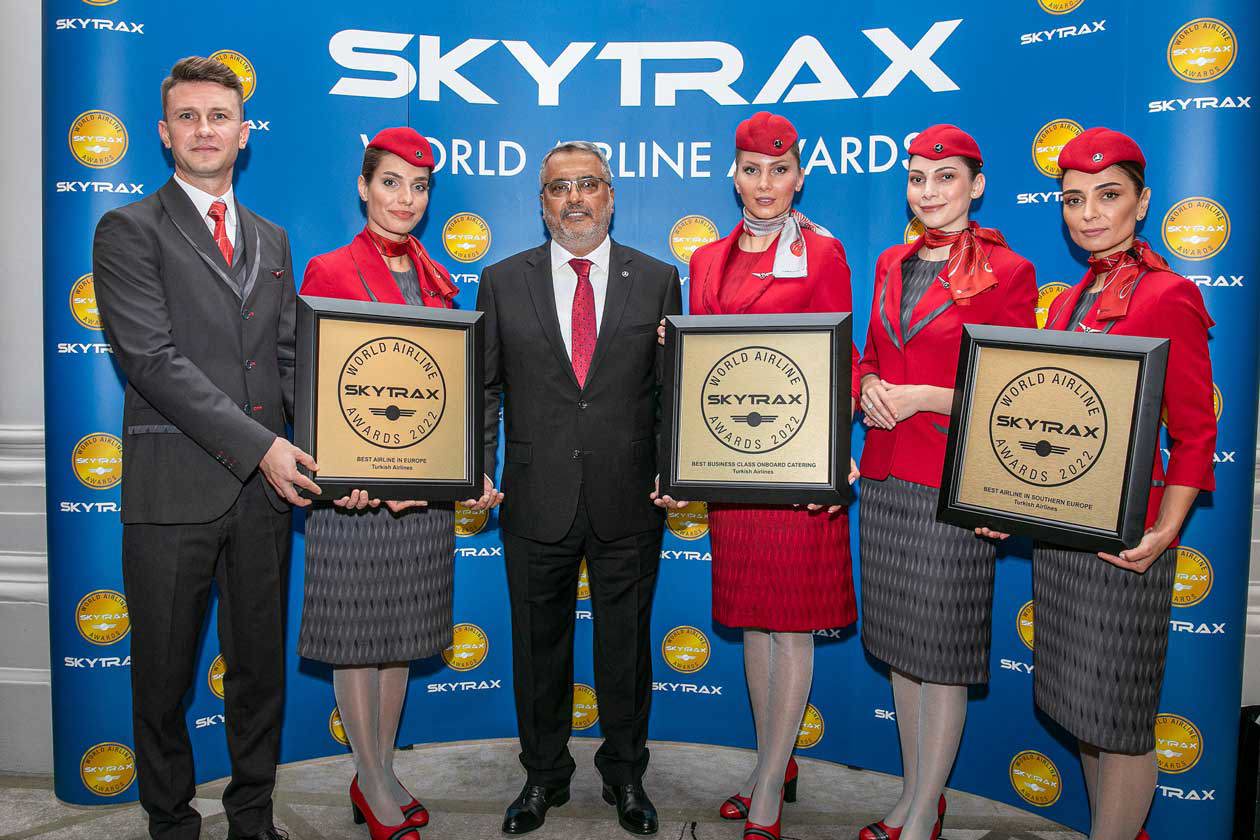 Turkish Airlines Best Airline in Europe, Skytrax World Airline Awards 2022. © Turkish Airlines Inc.
During the evaluation of the airlines to determine the winner of the awards, an online customer survey was operated from September 2021 to August 2022, together with invitations sent to previous year respondents in the survey database. The customer survey was provided in English, French, Spanish, Russian, Japanese and Chinese. Over 100 customer nationalities participated in the 2021/2022 survey with 14.32 million eligible entries counted in the results.
Receiving the awards at the ceremony, Turkish Airlines Chairman of the Board and the Executive Committee Prof. Dr. Ahmet Bolat said: “We are very pleased to be with you again in this environment where our distinguished service approach has been appreciated many times. As the Turkish Airlines family, we would like to thank our valued passengers, who deemed us worthy of these wonderful awards, and the Skytrax team, who put this evaluation into practice. With our privileged service approach, which distinguishes us from our competitors, we continue to take firm steps towards our goal of making the Turkish Airlines brand the best in the world by building on the unmatched service we offer.”
On the awards Skytrax CEO Edward Plaisted stated: "We congratulate Turkish Airlines for their success at the World Airline Awards, and winning the award as the Best Airline in Europe is a fabulous achievement in what is one of the most competitive markets. Alongside this, we are delighted to see Turkish Airlines take top place for the World’s Best Business Class Onboard Catering, reflecting the high standards achieved with their DO&CO cooperation in all aspects of meals served on Turkish Airlines flights.” 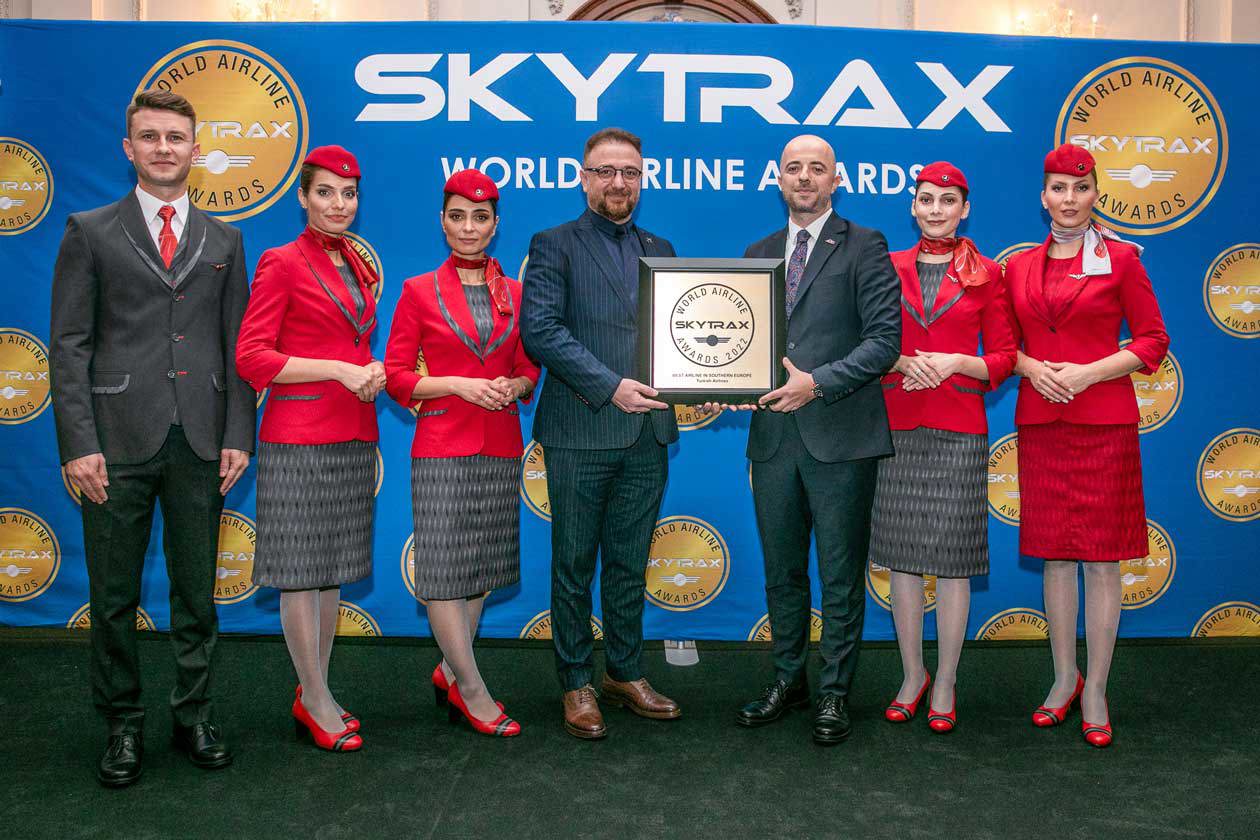 Turkish Airlines Best Airline in Europe, Skytrax World Airline Awards 2022. © Turkish Airlines Inc.
With the global airline reaffirming its leading position by becoming world’s biggest network carrier when it comes to available seat capacity on international flights and doing its part when it comes to sustainability in aviation with various projects to leave a better world for future generations, Turkish Airlines continues to maintain its signature service quality with Turkish hospitality at every corner of the world with its unparalleled flight network.

Turkish Airlines
Established in 1933 with a fleet of five aircraft, Star Alliance member Turkish Airlines has a fleet of 388 (passenger and cargo) aircraft flying to 340 worldwide destinations as 287 international and 53 domestics in 129 countries. 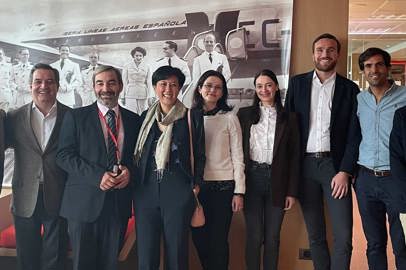 Iberia extends long-term partnership with Allianz Partners
Collaboration, for another 3 years until 2025 in 13 countries, allows passengers to have travel insurance with airline tickets
Airlines 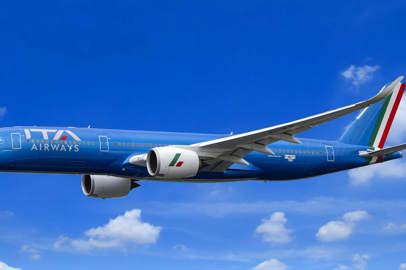 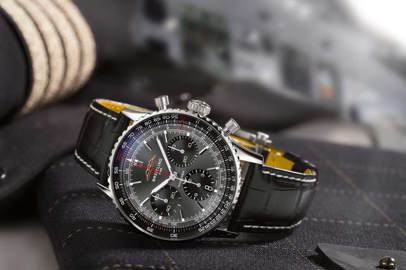 Breitling launches new Navitimer watch exclusive to Swiss
Made by Breitling, the new Navitimer B01 Swiss Limited Edition at only 700 pieces is sold exclusively on selected Swiss routes
Advertising