With this new livery, more essential and refined than ever, Greubel Forsey offers a new means of expression to two of their signature creations
This new finish highlights the unique profile of the GMT Sport’s bezel, an ellipse that gently curves at 12 o’clock and 6 o’clock to hug the contours of the wrist - a passion for perfect ergonomics that reaffirms the contemporary, everyday style of this exclusive timepiece. The GMT Sport emerges in a bold new character of titanium and blue. More ergonomic and contemporary than ever, this GMT Sport is the very first Greubel Forsey creation with acompletely integrated metal bracelet. With a new bezel and new finishes, this limited edition is an exciting evolution that just 33 collectors will have the opportunity to discover first hand.
Taking centre stage for the first time on the GMT Sport, the distinctive Greubel Forsey bezel now subtly relieved of the relief engraved key values, takes on a completely new profile. With hand-finished horizontal straight-graining on top and the hand polished contour and flanks taking on a soft yet striking new form, the bezel is beautifully refined, opening up the dial to attract even greater focus to the essential – the Greubel Forsey movement and hand-finishing, a characteristic of every timepiece. 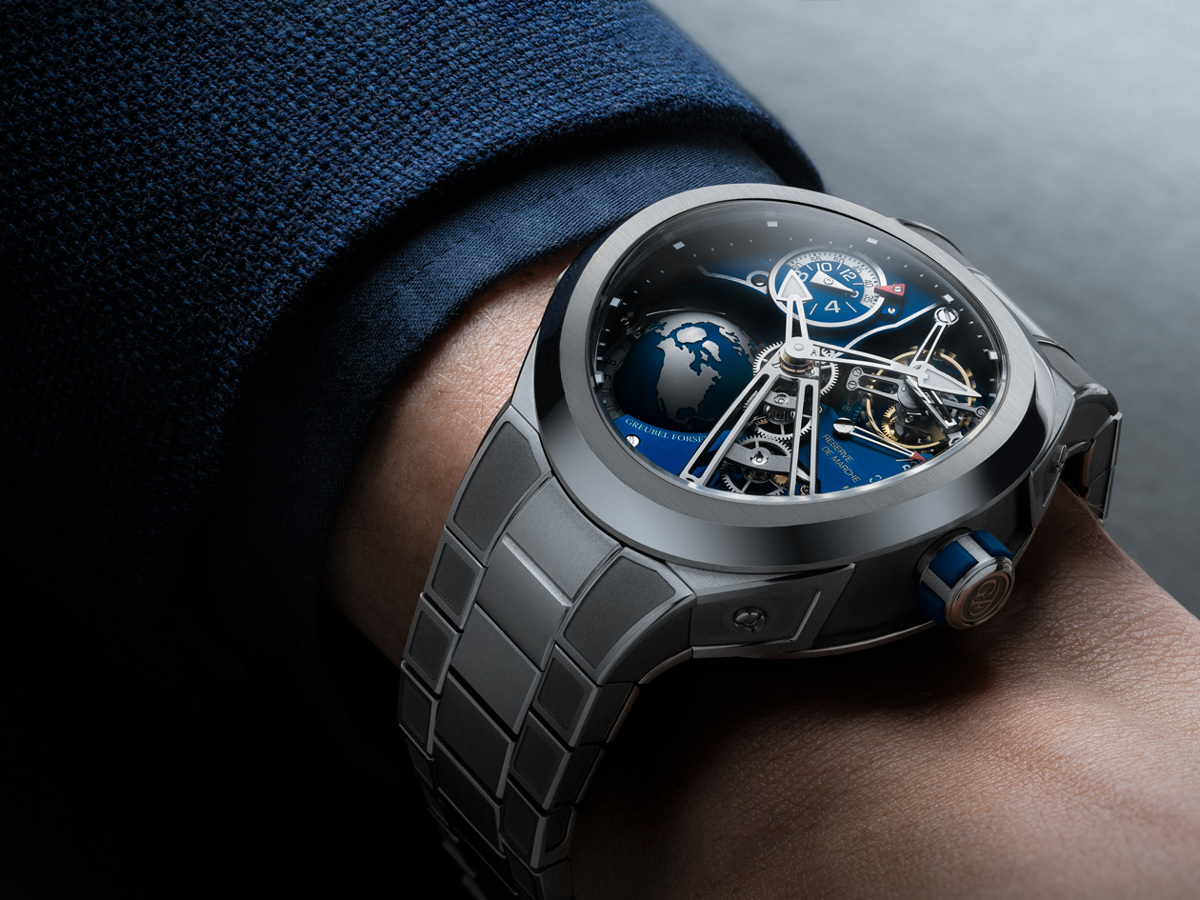 The new GMT Sport by Greubel Forsey. Photo: Copyright © Greubel Forsey.
This ergonomic design is further pursued in the new bracelet of this GMT Sport – the first ever metal bracelet on a Greubel Forsey creation. Entirely conceived in the Atelier and specifically for this timepiece, it is fully integrated into the case of the GMT Sport and profiled to seamlessly follow the elliptical shape of its case and bezel. Faithful to its tradition, Greubel Forsey has devoted particular attention to finishing with three distinct styles distributed over both the lateral and central links: straight graining, frosting and hand-polished bevelling.
For example, frosting was chosen to echo the finish of the lugs, underlining the aesthetic continuity between the case and bracelet. The latter, made of Grade 5 titanium, is lightweight, robust and very strong. It features a fine adjustment system, providing the valuable millimetres of play to allow the wearer to choose between a loose and casual or a snug, wrist-hugging fit. 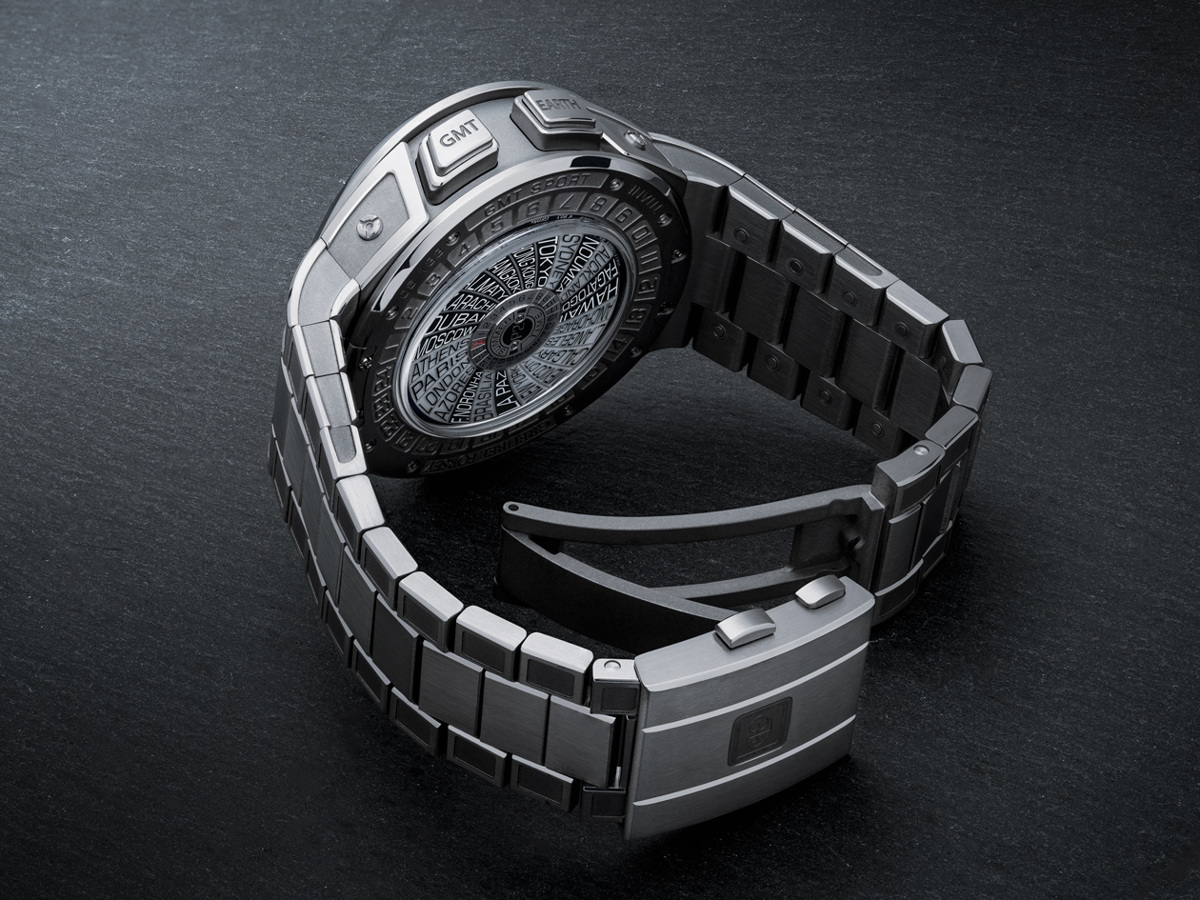 The new GMT Sport by Greubel Forsey. Photo: Copyright © Greubel Forsey.
As for the movement, this new GMT Sport is the first in a unified colour: the mainplate, bridges, globe, second time zone dial and 24-second indicator ring of the Tourbillon 24 Secondes at 1 o’clock are all in the same blue finish. The central suspended arched bridge as well as the tourbillon bridge are openworked to highlight the three dimensional movement architecture of its intense blue finish. The choice on the one hand of a deep, matte blue and on the other, the polished components in titanium (bridges, globe) or steel (hands, power reserve) accentuate the strong contrasts within the movement itself and ensure perfect legibility.
Thanks to its 42 mm case diameter (45 mm on the bezel), the expression of the movement’s technicality is perfectly harmonious with the intuitive central hours and minutes display, second time zone at 10 o’clock, power reserve at 3 o’clock and rotating terrestrial globe at 8 o’clock. 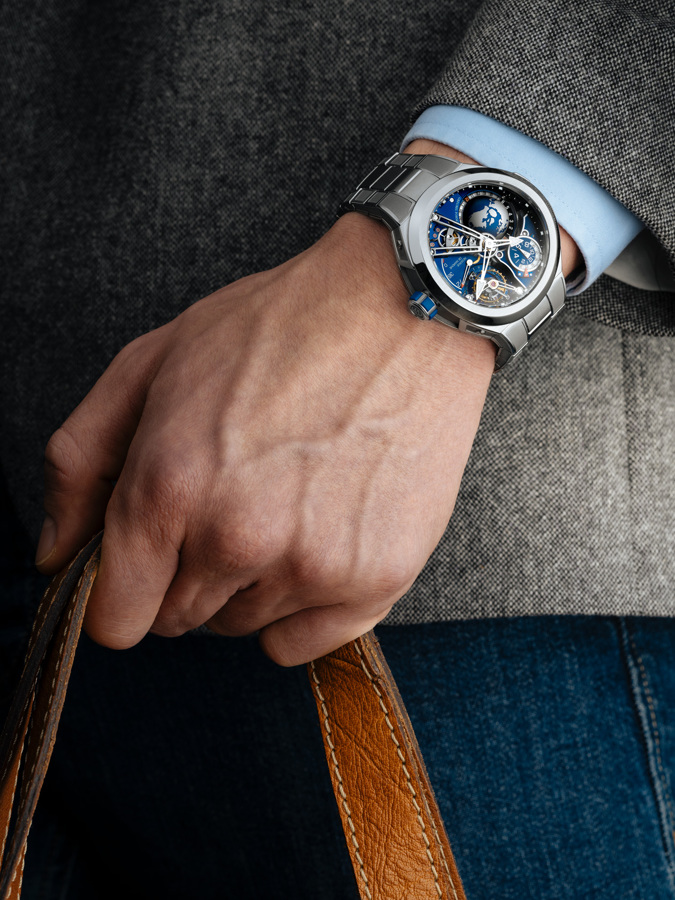 The new GMT Sport by Greubel Forsey. Photo: Copyright © Greubel Forsey.
With this new livery, more essential and refined than ever, Greubel Forsey offers a new means of expression to two of their signature creations. Their 3rd invention, the Tourbillon 24 Secondes is positioned between 12 o’clock and 2 o’clock. With its cage inclined at a 25° angle and completing a full rotation in 24 seconds, the Tourbillon 24 Secondes provides superior chronometric performance – in addition to the truly unique visual effect. Then, the terrestrial globe placed between 7 o’clock and 9 o’clock. More than any other, it embodies the three-dimensional time display championed by Greubel Forsey. Thanks to this invention which executes a complete rotation in 24 hours, universal time can be read easily, quickly and intuitively. 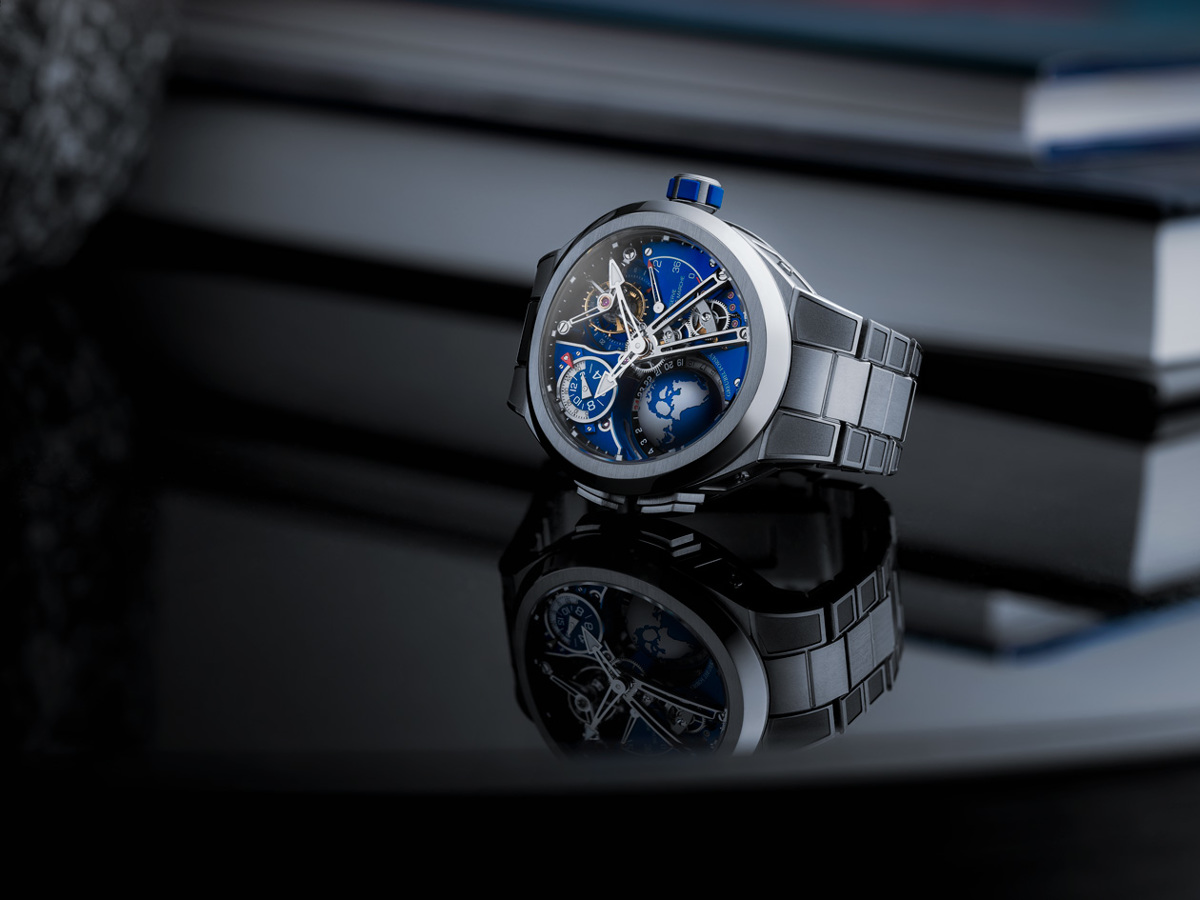 The new GMT Sport by Greubel Forsey. Photo: Copyright © Greubel Forsey.
Seen from above the North Pole, a ring with 24-hour markings allows the local time to be read for all longitudes while also acting as a day/night indication. On the caseback side, a disc displaying city names surrounded by 2 rings allows the wearer to read UTC Universal and Summer Time for 24 cities in 24 major time zones. It also distinguishes those time zones applying summer time (on a light background) from those who don’t (on a dark background).
Edited by Lisa Maria River
Text source and photos: Ufficio Stampa Greubel Forsey
Photos: Copyright © Greubel Forsey
All rights reserved. Reproduction prohibited.
Flight by private jet 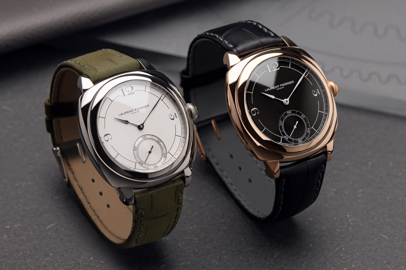 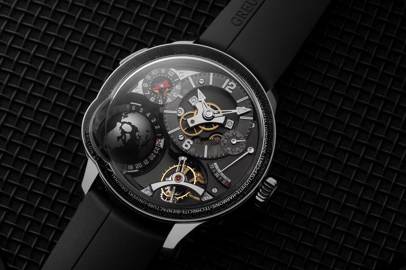 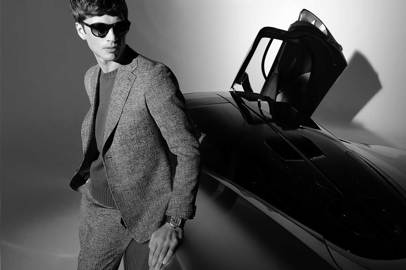