Alexandria
Where to go
Near by
Airports
Advertising
The pearl of the Mediterranean
Alexandria in Egypt charms with its unique blend of history and modernity. Even though little remains of the ancient city, Alexandria still retains its Mediterranean atmosphere, old European residences, coffee houses and ancient Greek and Roman monuments. The catacombs of Kom el-Shouqafa, the underwater ruins of Montazah and Maamoura and the city’s vibrant art scene make Alexandria a captivating tourist destination. A tour of the city should also include a visit to the Abu al-Abbas al-Mursi Mosque and the Coptic Cathedral of St. Mark.
The temperate Mediterranean climate in Alexandria ensures cooler summers, thanks to the refreshing sea breezes, and warmer winters than in other parts of Egypt. 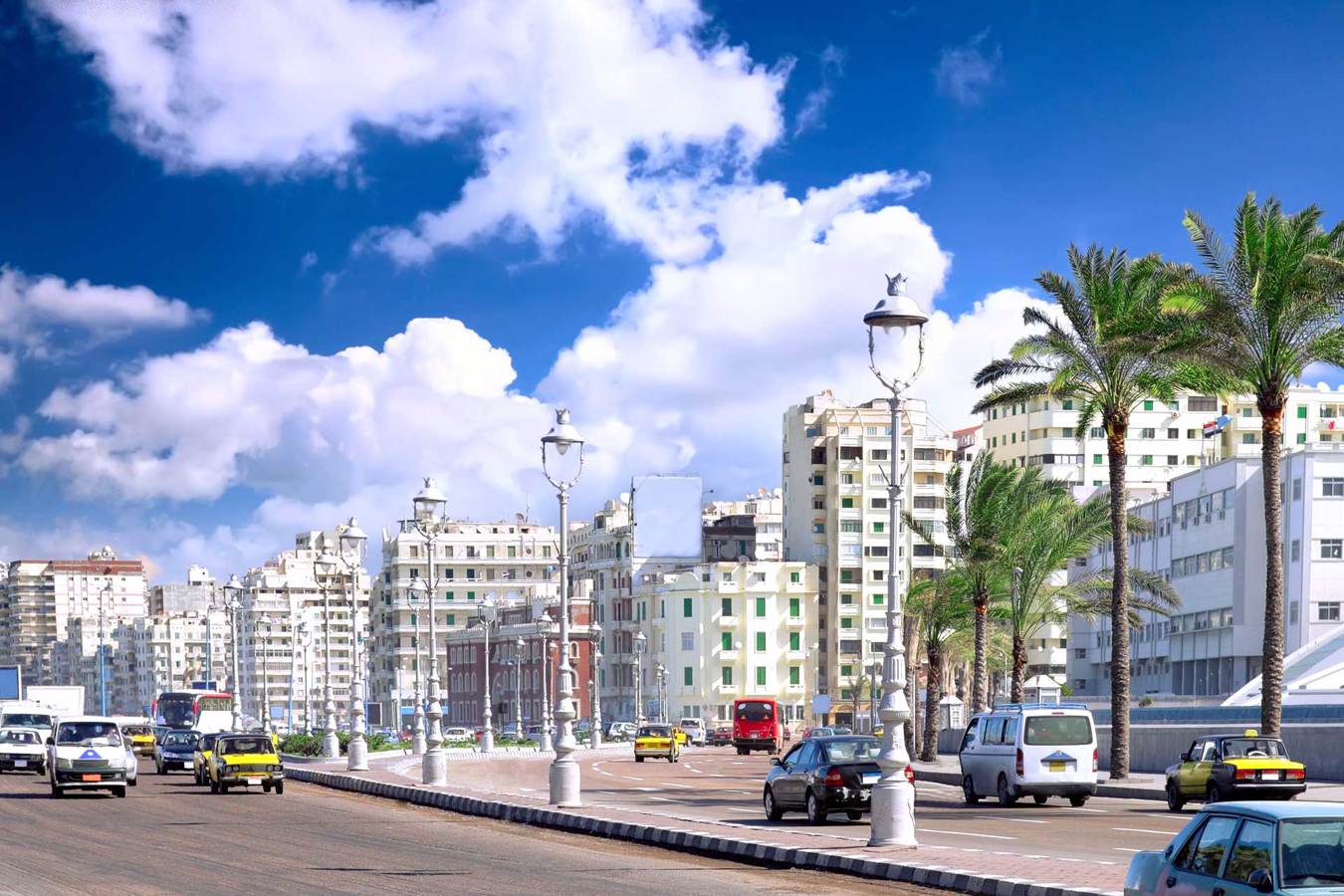 Alexandria. Copyright © Sisterscom.com / Shutterstock
The Corniche, Alexandria’s waterfront promenade, is a treat in both summer and winter. Starting from Ras El Tin and stretching all the way to Montazah, it offers spectacular views of the White Med. The Corniche was originally built in the 1930s and further developments were made to it in the early 1990s.
Stanley Bridge
Stanley Bridge, with a length of 400 metres, majestically overlooks Alexandria’s Stanley Bay. The bridge, characterized by elegant towers, overlooks the Stanley Beach and the promenade of Alexandria.

Alexandria. Copyright © Sisterscom.com / Shutterstock
Located close to the centre of the city, the National Museum accurately illustrates the history of Alexandria over the three floors of the renovated Italianate Al-Saad Bassili Pasha Palace. In every corner of this magnificent building, artefacts can be admired from the four main ages of Egyptian history: ancient, Greco-Roman, Coptic and Islamic. The Greco-Roman Museum displays a collection of art and artefacts dating back to the origins and legacy of the ancient city.
Bibliotheca Alexandrina
Every trip to Alexandria should include a visit to the building of the new Bibliotheca Alexandrina. The world’s largest reading space with over 8 million books, the library with its futuristic disk-like structure was opened in 2002. The entire building is covered in scripts and letters in almost all the languages of the world to reflect the importance and multi-cultural spirit of the place. 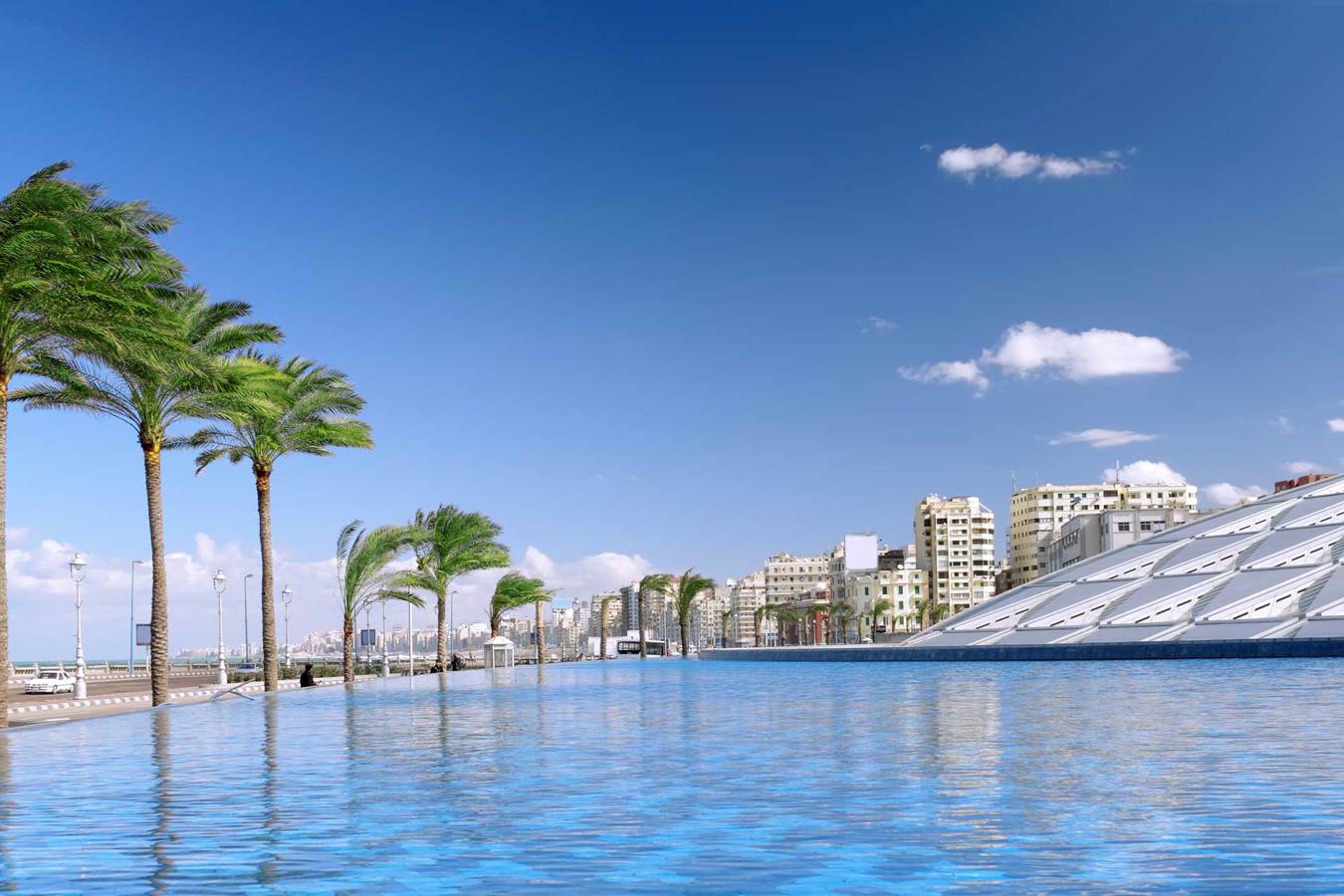 The Alexandria Opera Theatre is another small but extraordinary cultural place in the “Pearl of the Mediterranean”.

Similar to a traditional souk, Souk El-Attarine is more of a labyrinth of narrow streets and pedestrian roads, bursting with shops of all types on both sides of the streets, selling all kinds of souvenirs and traditional Egyptian products such as sheeshas (colourful blown glass containers) gallabiyas, belly dancer costumes, spices and various antiques.

In a coastal city such as Alexandria, the largest sea port in Egypt, it is inevitable that you’ll find a bustling and busy fish market. The blue sea of Alexandria is rich in flathead grey mullet, red mullet, bass, smelt, bluefish and sole. Various restaurants along the sea front serve excellent dishes of fresh fish caught by local fishermen. Fishing enthusiasts should head for the fishing port of Abu-Qir on the White Med (once a small fishing village to the north of Alexandria), where they can fish, swim and sunbathe.

Alexandria. Coastline. Copyright © Sisterscom.com / eFesenko / Shutterstock
The coastline offers different sections of beach from Maamoura in the east to Agamy beach to the west of Alexandria. It extends for some 70 km, from the north western tip of the Nile delta to Lake Mariout in the east, and is dotted with attractive bays and ports, such as Abu-Qir and the half-moon-shaped East Harbour of Alexandria, which is dominated by the majestic Qaitbay Fortress.
Archaeological Sites
The site of Abu-Qir lies to the north west of Alexandria. Here, archaeologists are currently exploring the submerged cities of Heraklion and Canopus. Heraklion was not only the main trading port in the Mediterranean in the sixth century, it was also an important religious centre. Canopus was the site where the goddess Isis was believed to have found the last part of Osiris’s savaged body. The ancient Egyptians believed that Osiris was killed by his jealous brother Seth, who scattered the parts of his dismembered body throughout Egypt. According to Egyptian mythology, Isis managed to find all the parts and placed them in a vase which was kept in Canopus.

The site, with its hundreds of Greek-Roman amphorae, bears witness to the important trade connections between Egypt and the Roman Empire.

Situated in a small bay, in the eastern part of Alexandria, and overlooked by the Montazah Palace, the underwater archaeological sites of Montazah and Maamoura testify the evident marine activity that took place in the region back in the period between the first and sixth centuries A.D. The main attraction of the site is the stone pier, 200 metres long, dating back to the first century. It lies in water 3 to 6 metres deep, surrounded by pieces of amphorae and small anchors. The site of Maamoura is located further to the east of Montazah; here lie the remains of another stone pier, dating back to approximately the same period.

There is something magical in the air at the site of Cleopatra’s now submerged palace, where, according to legend, Mark Antony and Cleopatra declared their love for one another in 37 B.C. Some of Cleopatra’s boats lie alongside the ruins of the ancient palace, surrounded by scattered terracotta amphorae that once contained wheat or wine according to their shape or size. 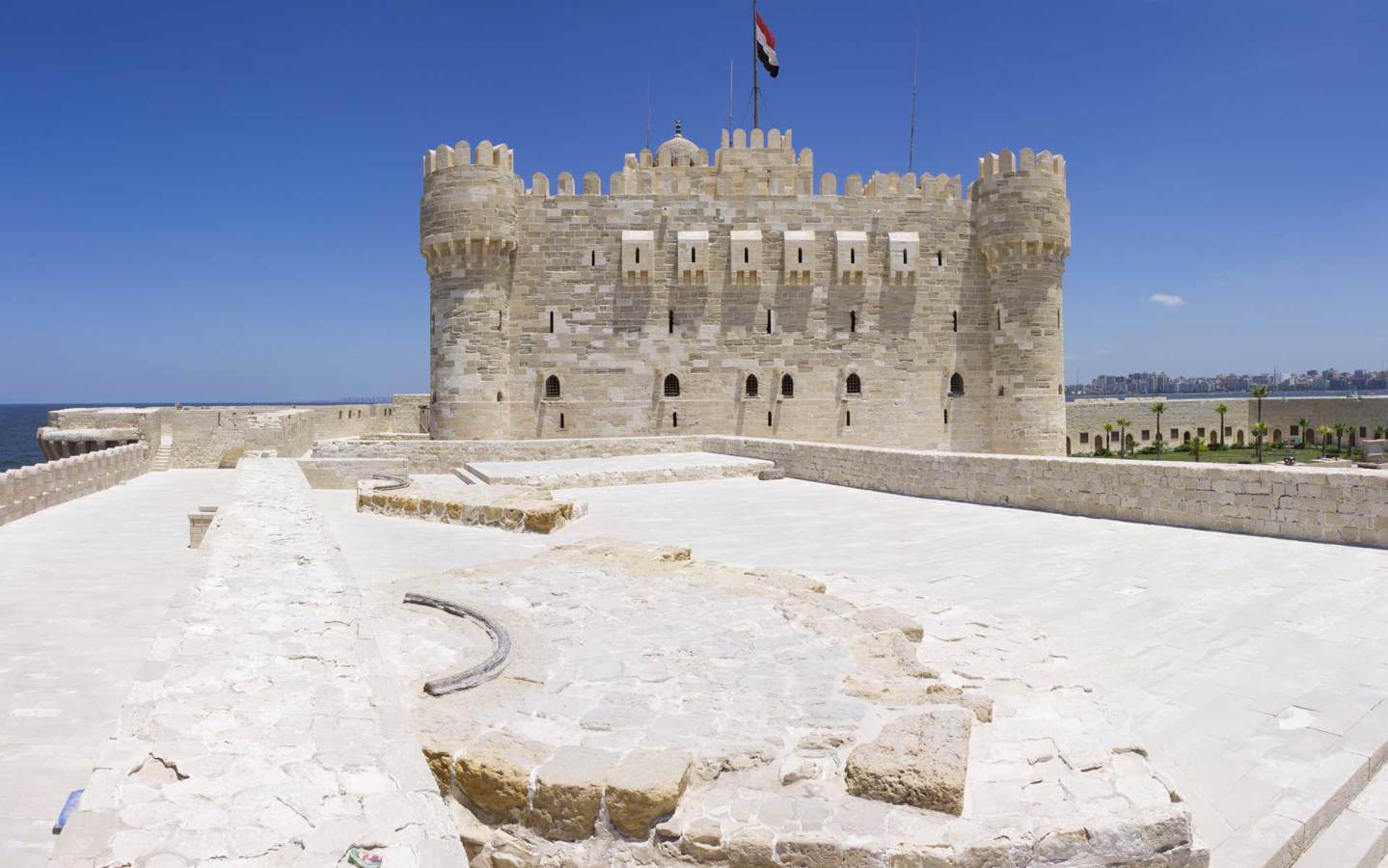 Alexandria. Citadel of Quaitbay. Copyright © Sisterscom.com / Shutterstock
Situated in the eastern part of the Harbour, around the Qaitbay Citadel of Alexandria, the diving site of Pharos Island offers over 5,000 archaeological relics scattered over an area of 5,000 m2. This amazing underwater museum features columns, statues, sphinxes and even the ruins of the famous lighthouse of Alexandria, one of the wonders of the ancient world and the tallest structure on Earth for many centuries. 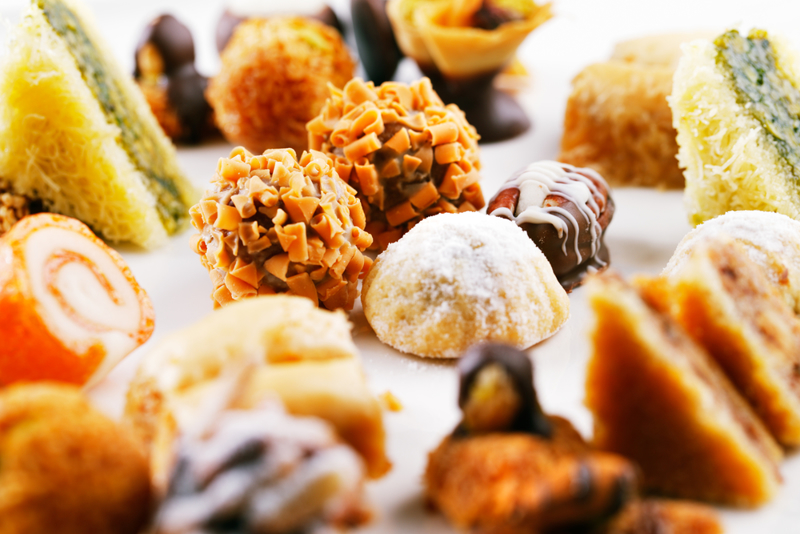 Arab pastry. Copyright © Sisterscom.com / Shutterstock
Alexandrian delicacies  for a cultural and gastronomic experience
Alexandria’s Ramleh station is home to the famous Delices patisserie and the refined La Veranda restaurant, which offers exquisite French and Greek dishes in a sophisticated atmosphere. Founded in 1900, Athineos is the oldest coffee shop-restaurant in Alexandria. Located in front of Midan Ramla, the place retains its old charm with high decorated ceilings, Art Deco furnishings, beautiful and imposing columns and Greek-inspired sculptures, and in the past few years has become a much-loved destination of groups of tourists to the city.
Text by Lisa Maria River
Phtos: Sisterscom.com, Shutterstock
Video: www.egypt.travel
Published on Avion Tourism Magazine
Copyright © Sisterscom.com
Updated: june 2018, february 2020 by Nicolò Villa
Tourism Board
www.egypt.travel
Where to sleep in Alexandria

Alexandria. Copyright © Sisterscom.com / Shutterstock
Alexandria is a welcoming city and offers different possibilities for accommodation.
To find the ideal hotel and the best offers you can do a search for the stars but also for districts or landmarks.
STARS
Hotels for stars, differentiated by type of services:
DISTRICTS
Hotels in the districts
LANDMARKS
Hotels in tourist areas
AIRPORT
Hotels near the airport
Advertising
WHERE TO GO
Monuments 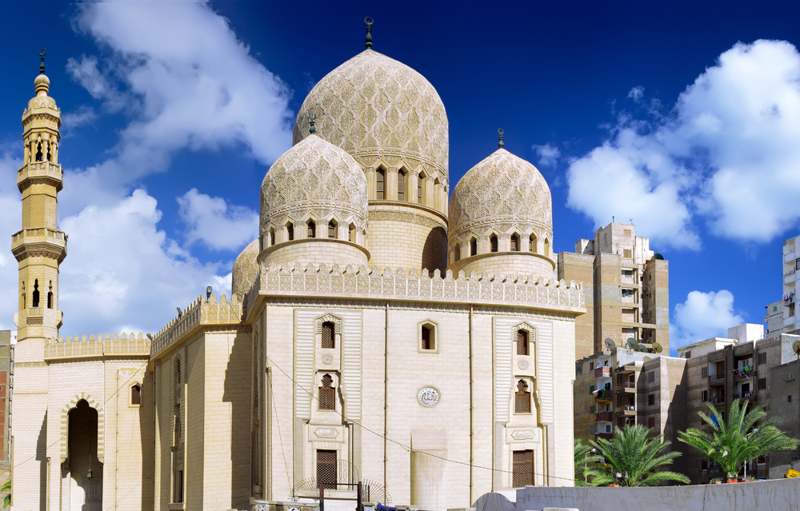 Copyright © Sisterscom.com / Shutterstock
ABU AL-ABBAS AL-MURSI MOSQUE
Abu Al-Abbas Al-Mursi Mosque: the most beautiful Muslim temple in the city is a shining white octagonal building that combines elaborate Andalusian influences with elaborate Islamic architecture. The temple is dedicated to the memory of a St. Sufi of the thirteenth century and coming from Andalusia. 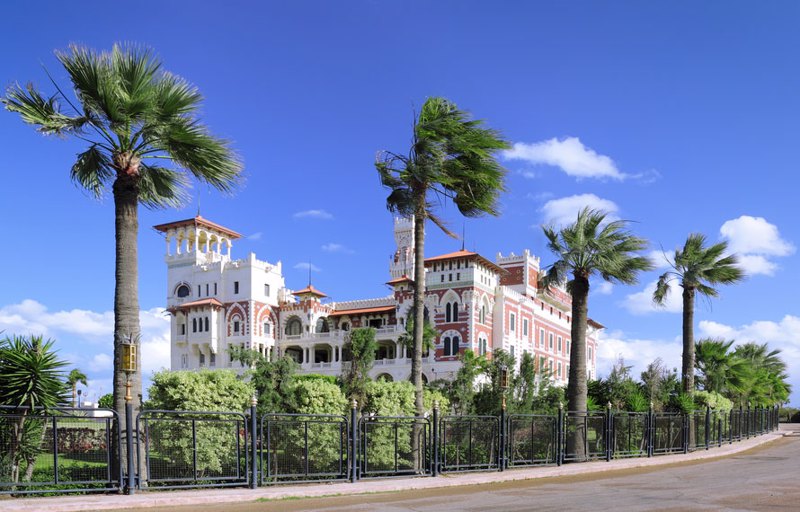 Copyright © Sisterscom.com / Shutterstock
MONTAZAH PALACE
Built by the kedivè Abbas II as a royal summer residence, this splendid palace is a surprising mixture of pseudo-Mauritian and Florentine style. It is not open to the public but the inhabitants of Alexandria go to the huge gardens for a little escape from the city center. 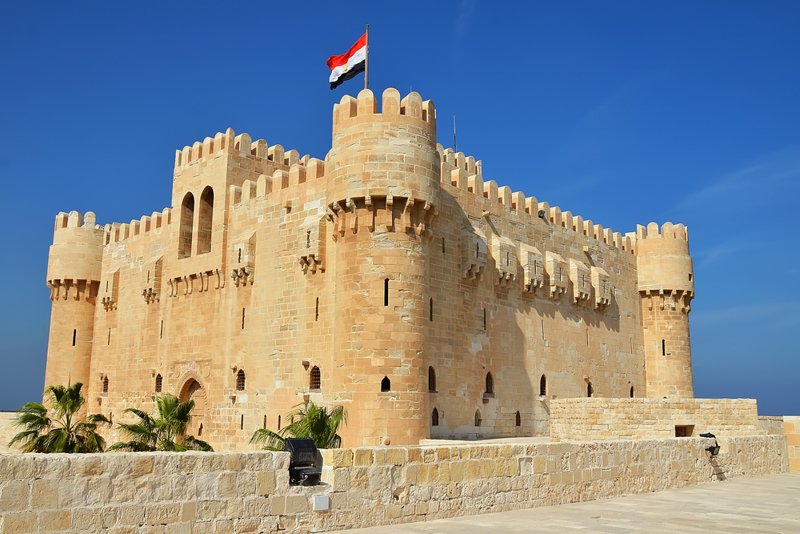 Copyright © Sisterscom.com / Shutterstock
QAITBAY FORTRESS
Built in 1479 by the Mamluk Sultan Qaitbay, on the area where once stood the legendary Lighthouse of Alexandria, this impressive fortress contains some of the lighthouse stones and red granite columns in the western part of the outer walls. Today it is used as a Nautical Museum. The view from its walls is enchanting. 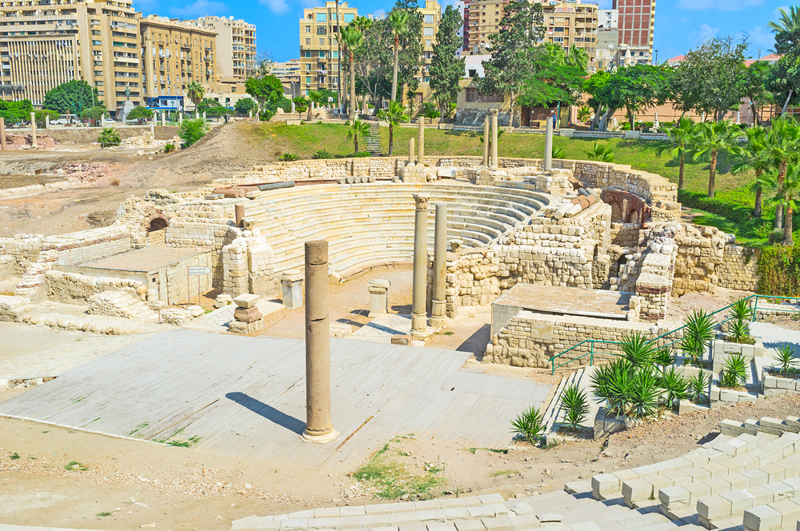 Copyright © Sisterscom.com / Shutterstock
ROMAN AMPHITHEATER
Unique in its kind throughout Egypt, this elegant 2nd century marble amphitheater is today one of the best preserved monuments in the country. The splendid mosaics of the stage and the granite columns still inspire admiration.
Advertising
You might be interested in 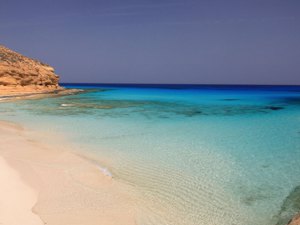