Tirana
Where to go
Near by
Airports
The heart of Albania
Capital of Albania, the city of Tirana is today the centre of all major industrial and commercial activities of the country. Situated on the Ishem River, Tirana, as its numerous archaeological sites testify, boasts a millenary history even though its official foundation dates back to more recent times (1614).
However, the city is not yet on the tourist map, mainly due to the long-standing Communist regime, which fell in 1992. Much progress has been made in the city, which is now an active, modern and above all lively place in cultural terms.
To learn more about Tirana, a good starting place is Skanderberg Square, the beating heart of the city. It is dedicated to the great patriot and soldier Gjergj Kastrioti Skenderbeu, who succeeded in the huge undertaking of keeping the Turks out of the area for over two decades. A large statue of the hero sits in the centre of the square, which was built in typical Communist style, and which, with its architectural perfection and vast size, was an expression of dictatorial power and the ideal location for impressive military parades. 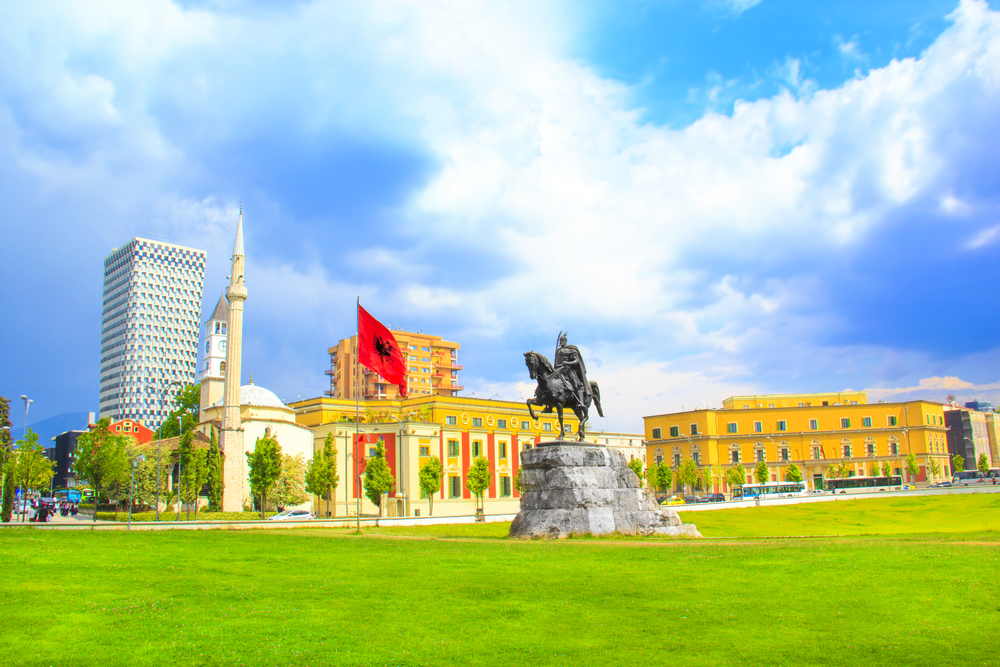 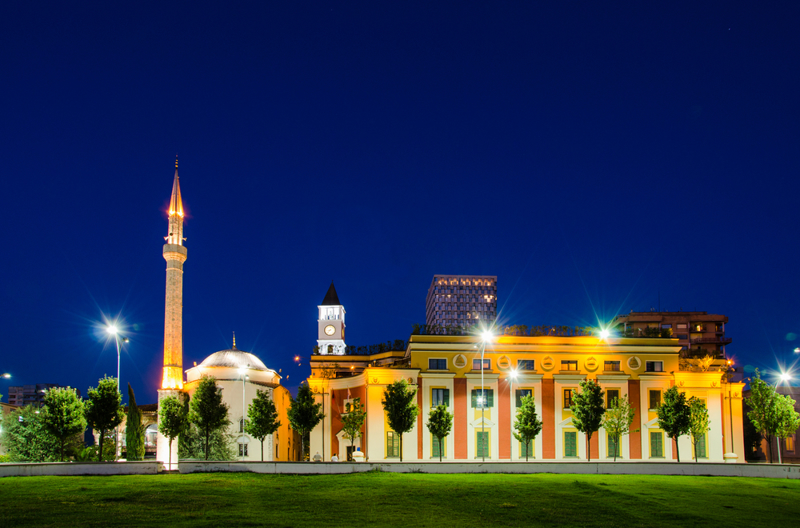 Et’hem Bey Mosque
Skandeberg Square
The square is home to important museums and buildings, including the Clock Tower, which was built in 1821 and raised several years later to a height of 35 metres. An incredible view of the city is the reward at the end of the 90 steps to the top of the tower, where a large clock of German manufacture has pride of place.
Alongside the Clock Tower stands the elegant Et’hem Bey Mosque, one of the oldest religious buildings in the city, which was constructed by Mulla Bey and his son Et’hem Bey from 1794 to 1821. It has a large porch, beautiful minaret and luminous dome.
The cultural vivacity of the city is represented by the Opera House, the largest theatre in Albania, which was erected in the first half of the fifties.
The International Culture Centre, known also by the curious name of The Pyramid, is an interesting former museum which was commissioned in the eighties by the daughter of the Communist dictator.
At the end of the Communist regime, which abolished all religion in the Constitution, churches and places of worship were reopened. Among these, and worthy of a visit, is the Catholic Cathedral of St. Paul, which has the essential lines of modern architecture and beautiful stained glass windows depicting Mother Theresa of Calcutta, an Albanian, and Pope John Paul II.
As proof of the interest of the city and its public administration in culture, Tirana not only has many universities, but also a wide variety of unique museums, including the Archaeology Museum, which is filled with pots and items of everyday use, and the exceptional Natural History Museum, which is dedicated to the environment and local and national flora and fauna. Its extensive section devoted to animals displays the largest marine turtle found in the country. 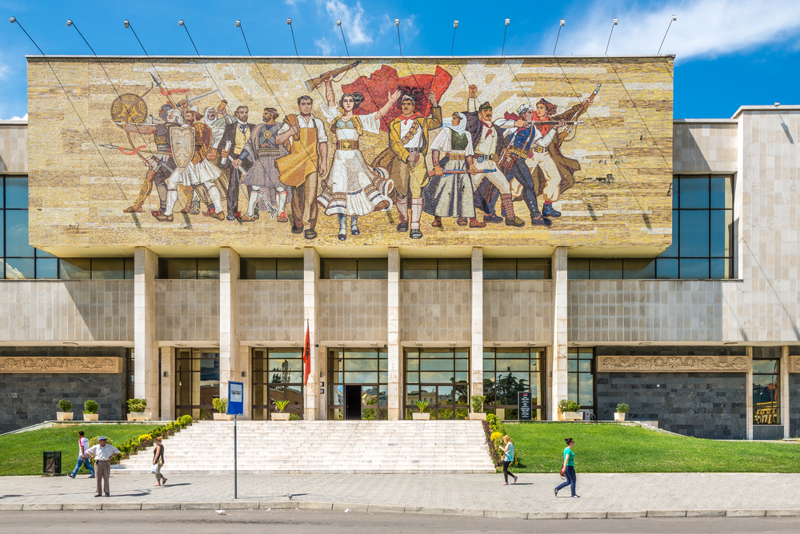 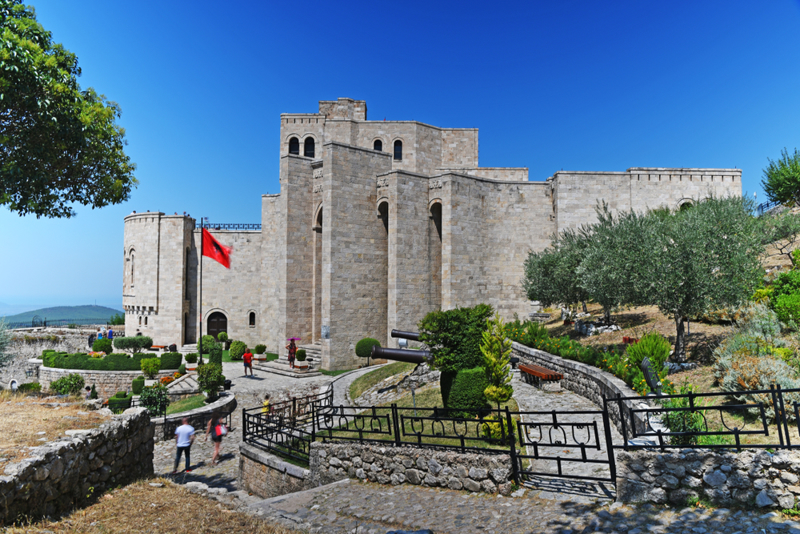 The Castle of Croia
The area around Tirana
There are two important Albanian towns in the area around Tirana that are worth a visit.
The first, Durazzo, lies on the coast opposite the Italian city of Bari and is just half an hour away from Tirana. It is an important port on the Adriatic Sea and the oldest in Albania. It is also home to the largest amphitheatre in Albania, which is decorated with mosaics of rare beauty and is presently a candidate monument for UNESCO world heritage status.
The other town is Croia, which possesses a very beautiful castle dedicated to the national hero Skanderberg, who is still today revered by the entire population.
Tirana’s cuisine, as with all Albanian cuisine, is heavily influenced by Turkish cooking but also, and above all, Greek coolking, and features main dishes of meat (lamb and mutton) mixed with vegetables and often accompanied by a selection of small spicy dishes known as mez.
Text by Anna Glik
Photos: Sisterscom.com, Shutterstock
Video: www.visit-tirana.com
Copyright © Sisterscom.com
Tourist Board
www.albania.al
www.visit-tirana.com
Where to sleep in Tirana

Tirana is a welcoming city and offers different possibilities for accommodation.
To find the ideal hotel and the best offers you can do a search for the stars but also for districts or landmarks.
STARS
Hotels for stars, differentiated by type of services:
DISTRICTS
Hotels in the districts
LANDMARKS
Hotels in tourist areas
AIRPORT
Hotels near the airport 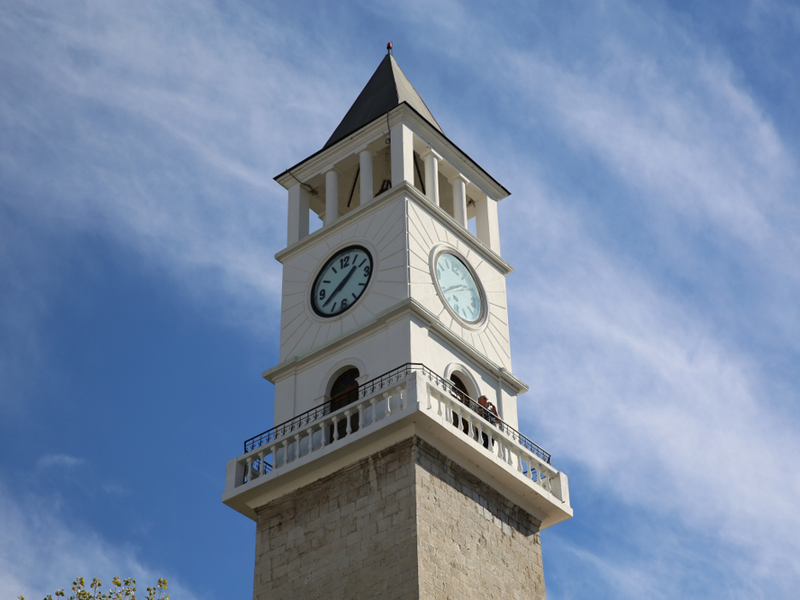 CLOCK TOWER
Known as Kulla e Sahatit in Albanian, the clock tower is one of the city’s symbols. Its construction began in 1821, thanks to the contribution of some wealthy families (according to Muslim tradition). In 1928 the tower was raised further to a height of 35 metres with 90 steps and a modern German-manufactured clock was installed. Seriously damaged during World War II, it was restored during Communist rule. Open to the public in 1996, it offers unbeatable views over the city. 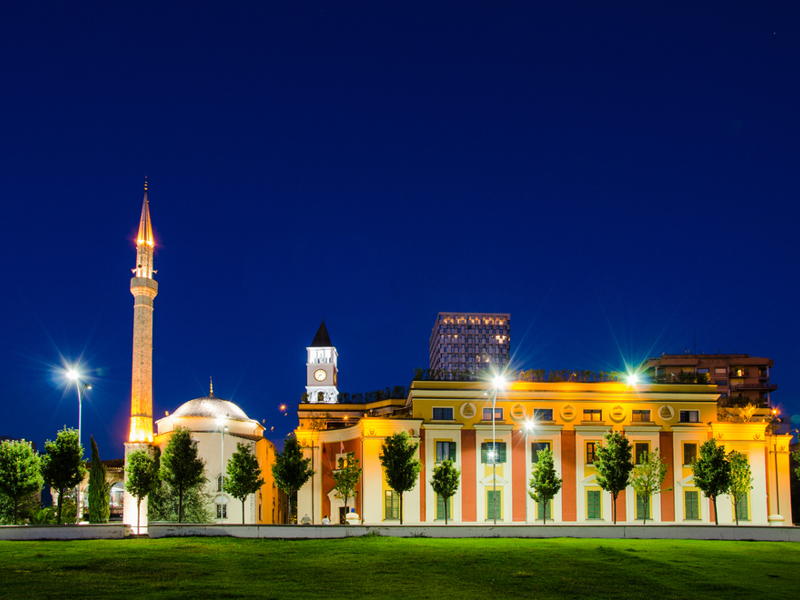 ET’HEM BEY MOSQUE
Erected by Molla Bey and his son Et’hem Bey, building began in 1794 and ended in 1821. The mosque is a splendid building with elegant and harmonious forms, but rather modest dimensions. It is situated alongside the Clock Tower and features a large portico of 14 arches and 15 columns, and a minaret and a bright dome. It is one of the oldest and most interesting religious buildings of the city, which also houses wonderful paintings. 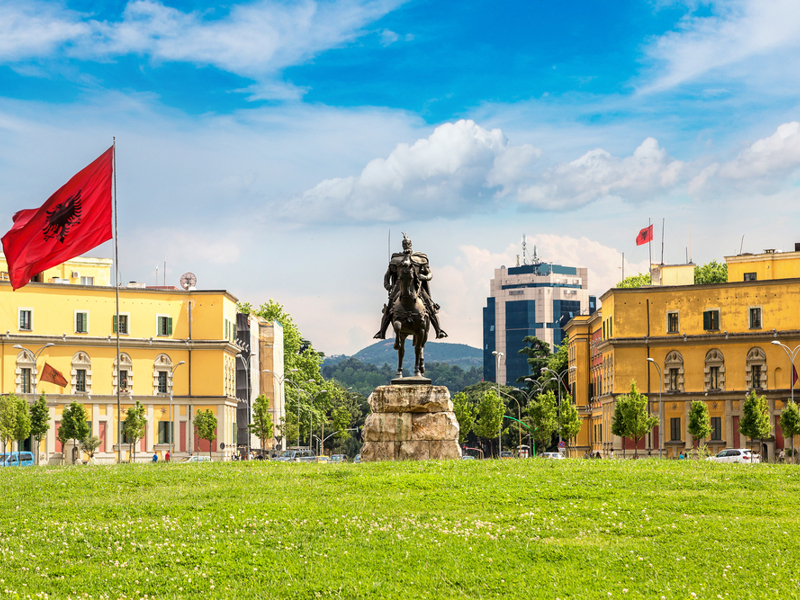 SKANDERBERG SQUARE
The heart and soul of Tirana, the square was dedicated to the great patriot and soldier Gjergj Kastrioti Skënderbeu. An equestrian statue of the soldier sits in the centre, overlooking museums and important buildings. The square appears immense and ordered - in perfect Communist style. 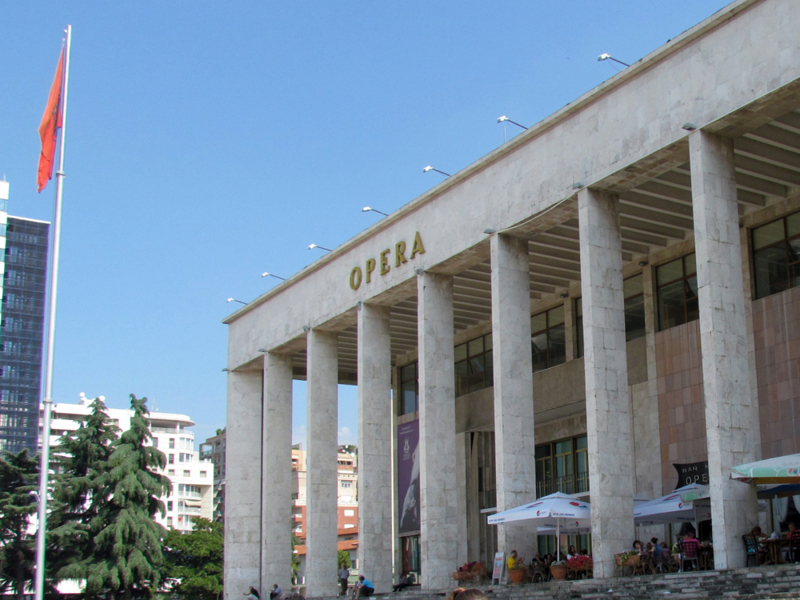 THE OPERA BUILDING
The National Theatre of Opera and Ballet is the largest theatre of Albania. Built fairly recently - in the early 1950s - it is one of the symbols of cultural dynamism of the city. As with almost all buildings in the city, it was built during the Communist regime. 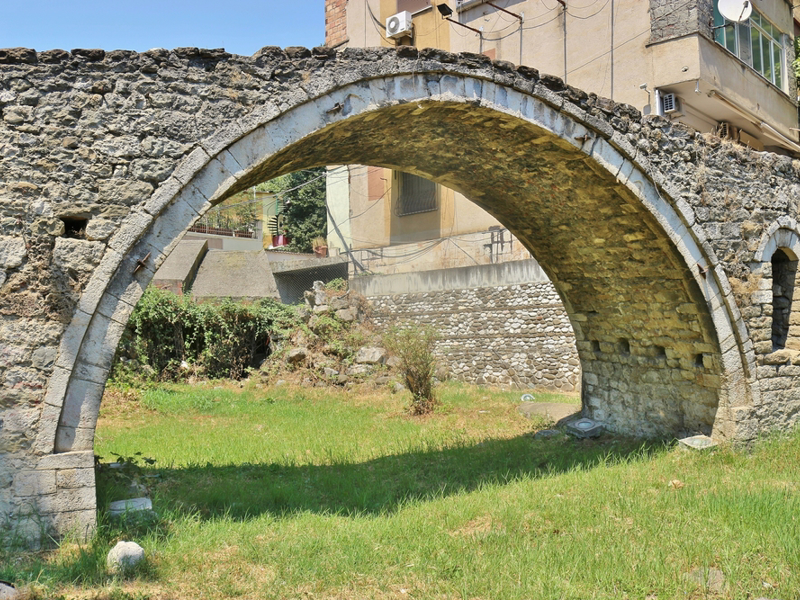 TABAK BRIDGE (Ura e Tabakëve)
Tabak Bridge, known as the Bridge of St. George, is a stone bridge of rather modest dimensions but with harmonious lines. Situated in the eastern part of the city, in a district known as "Tabakanë", the bridge was erected in the XVIII century and has a height of 7.5 metres. It is considered a historic monument as a symbol of economic and social development of Tirana.
Museums 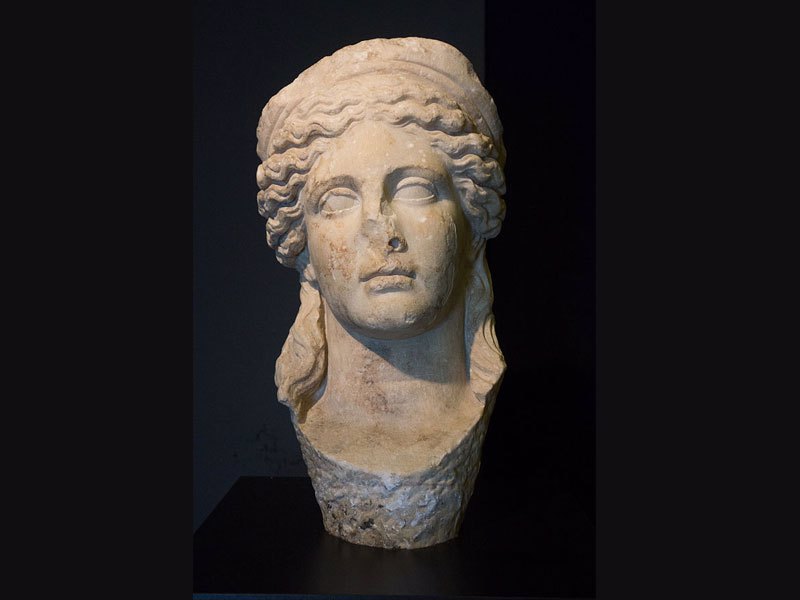 ARCHAEOLOGAL MUSEUM
Bulevardi “Dëshmorët e Kombit”
The Archaeological Museum is one of the most interesting museums of Tirana and the first museum set up after the Second World War. It was inaugurated in 1948 and exhibits archaeological finds, in particular pots and items of everyday use found in the city’s suburbs.
www.arch.tirana.cchnet.it 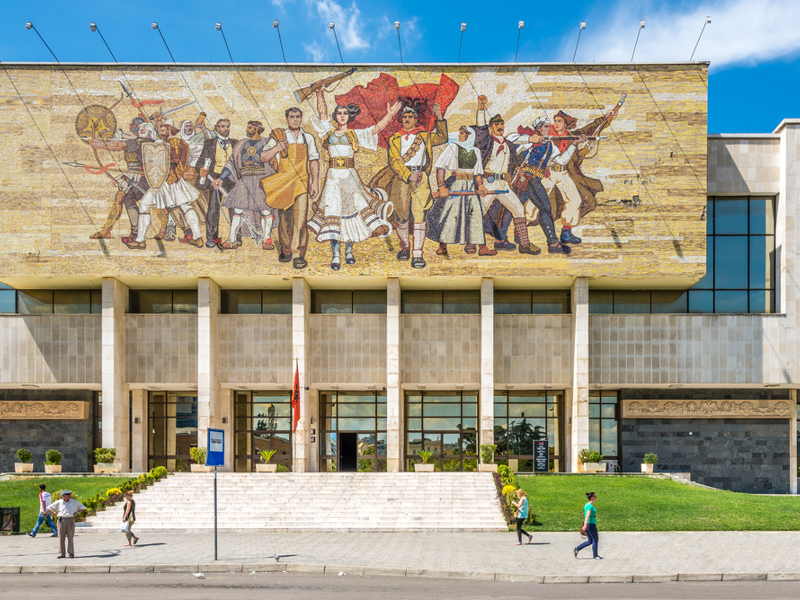 NATIONAL HISTORY MUSEUM
Skënderbeg Square
Inaugurated on 28 October 1981, the National History Museum is the principal museum of the city as well as the most important and interesting of the entire country. Its almost 4,000 finds illustrate the history, culture, art and traditions of Albania from the time of the Illyrian people to the Communist regime. The mosaic on the front of the building is particularly beautiful.
www.hist.tirana.cchnet.it
Excursions
DURRES
The city of Durrës, which is only half an hour from Tirana, is an important port city of approximately 250,000 inhabitants and capital of the prefecture and district of the same name. It is the oldest city in Albania, which was founded in 627 BC as a Greek colony with the name of Epidamno. Durrës is famous for its amphitheatre, the largest in Albania and one of the largest of the entire Balkan area, which was built in the I century BC and completed with a crypt and mosaics of rare beauty. The monument is a candidate to become a UNESCO World Heritage Site.
www.durres.gov.al
Destinations found in the vicinity 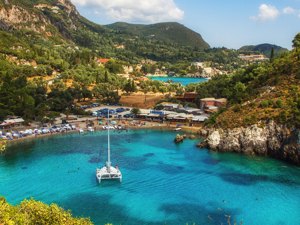 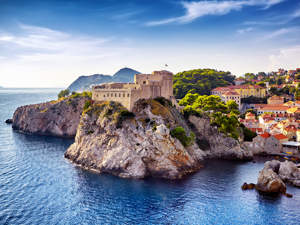 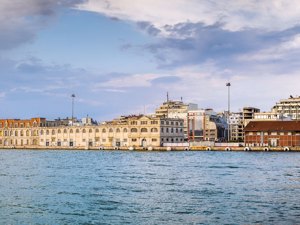 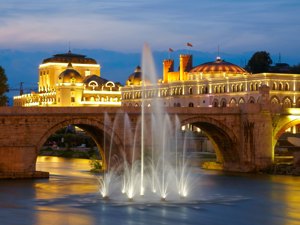