The airport
How to get there
Near by
The first civilian airport in Gdansk was set up after First World War following the adaptation of the military airfield built in 1910 in the Wrzeszcz district of Gdansk, formerly known as Langfuhr. Since that date the airport resulted in the acquisition of new areas and infrastructure changes e in the 1920s Gdansk Lech Walesa Airport was transformed into an international airport. The company Gdansk Lech Walesa Airport Ltd., which manages the airport,  was established in 1993.
The very favourable aviation conditions provided for by the airport in Gdansk enabled the launch of regular flights between Gdansk and Warsaw, Szczecin, Elblag, Malbork, Königsberg (now Kaliningrad), Olsztyn and Berlin.
In response to the growing needs of this dynamically developing region the decision was taken to change the location of the airport from the city centre to an area with room for the growth of both Gdansk's aviation services. A new passenger terminal was built according to European standards. Today, Gdansk Lech Walesa Airport is the third largest airport in Poland it serves as an auxiliary airport for Warsaw.
INFORMATION
Management company: Gdansk Lech Walesa Airport Ltd.
Address: ul. Słowackiego 200, 80-298 Gdańsk - Poland
Telephone no.: +48 525 673 531
Website: www.airport.gdansk.pl
TECHNICAL DATA
IATA Code: GDN
ICAO Code: EPGD
Country code: PL
Flights 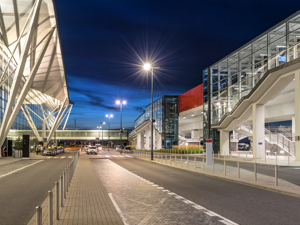 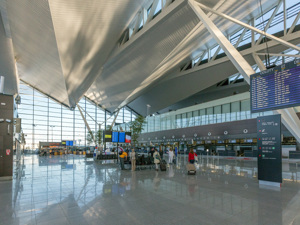 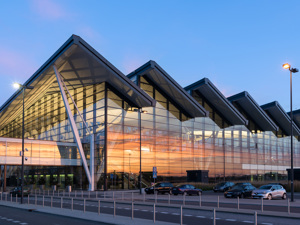 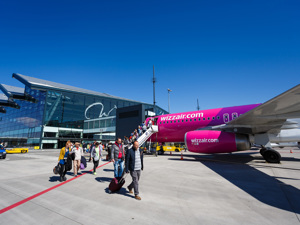 Transportation to/from the airport
Bus
The bus line in airport are to/from: Gdańsk-Wrzeszcz (Railway Station), Gdańsk Główny (Railway Station) and Gdynia Główna (Railway Station). Night bus line to/from airport to/from Gdańsk Główny (Railway Station).
Passangers from Terminal have an opportunity to use shuttle bus operated by ‘MPA Poland Transport’ on the route: airport – centre of Gdansk.
The bus ‘Zzy Travel’ transfer to airport from: Koszalin, Słupsk, Sławno.
The bus ‘apt24 airport service’ transfer from the airport to: Koszalina, Słupska, Sławnn, Lęborka.
Car
Lech Walesa Airport is only 10 km away from Gdansk city center. Sopot and Gdynia 11 and 23 km respectively.
To Gdynia: after leaving the airport, head for the ring road, which will lead you directly to Gdynia.
To Gdansk city center: after leaving the airport, head for the ring road. You can either go straight all the way down Slowackiego street to Gdansk Wrzeszcz or take the ring road, make your way towards Pruszcz Gdanski and take the first exit to Kartuska street, which leads to city center.
Taxi
A taxi rank is located in front of the main entrance to the passenger terminal and is serviced by ‘City Plus Taxi’.
Car hire
The Airport is served by several car rental companies: Express Rent a Car, Avis, Budget, Europcar, Hertz e National Car Rental.
Hotels