BUD Airport
Budapest
The airport
How to get there
Near by
Budapest Airport Ferihegy, commercially known as Ferihegy International Airport after the dedication to the musician Franz Liszt, Hungary is the main airport and is located 16 km east-southeast of the center of Budapest. The airport offers connections to major cities in Europe, the Middle East, Asia and North America. The airport has three terminals: 1, 2A and 2B, plus an area dedicated to General Aviation. Terminal 1 is the oldest, reopened after a renovation in 2005 and houses the low-cost airlines. It is divided into two areas: one dedicated to Schengen flights and the other for non-Schengen flights. Terminal 2 was opened in 1985 and only in 1998 was renamed Terminal 2A. It was designed for flights of Malév Hungarian flag carrier, but since 2008 all flights home to the Schengen area. The Terminal 2B, opened in 1998, although it is connected with the terminals A, form a structure in its own right and is home to the non-Schengen flights.
INFORMATION
Management company: Budapest Airport Zrt.
Address: BUD Nemzetközi Repülőtér - 1185 Budapest - Hungary
Telephone no.: +36 (1) 296-7000
Website: www.budapestairport.hu
TECHNICAL DATA
IATA Code: BUD
ICAO Code: LHBP
Country code: HU
Flights 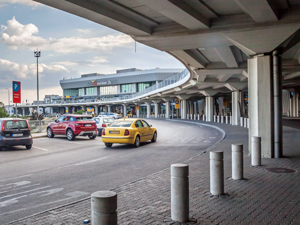 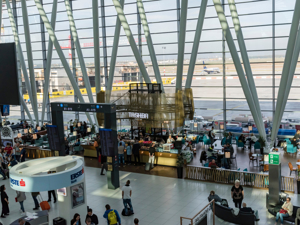 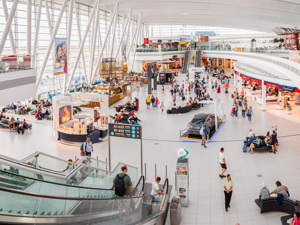 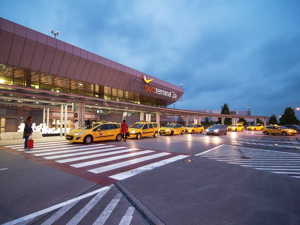 Transportation to/from the airport
Train
The closest train station to Budapest Airport Terminal 2 is Ferihegy, with trains operating to and from the Nyugati railway station in Budapest. Nearly 100 trains per day, including InterCity services, provide easy access to and from the city in less than half an hour. From the Ferihegy train station, Terminal 2 is accessible by bus number 200E during the daytime and with night bus number 900 at night time.
Shuttle
AirportShuttle-Minibus
It provides a reasonable airport door-to-door transfer between the Airport and any point of Budapest and its fleet operates 24 hours a day. The passengers travelling to /from the same/ closely situated address are escorted in the same vehicle. The service provides the transfer with a boarding capacity of 8 to 10, and 30 to 50 passengers. The AirportShuttle-Minibus Desks are to be found at every terminal (Terminal 1, Terminal 2A and 2B). All Minibuses arrive to and depart from the Terminals’ Main Entrance. Reservations can be made at the AirportShuttle-Minibus Desks or at least 12 hours before your flight departure via online reservation system www.airportshuttle.hu
Bus
From 4:00 a.m. to 11:00 p.m., bus number 200E commutes between Terminal 2 and the Kőbánya-Kispest metro terminal (metro line M3), via the Ferihegy train station(trains to the Nyugati railway station in Budapest). From the Kőbánya-Kispest metro terminal, passengers can take the M3 metro towards Újpest Központ to reach the city center. It is possible to change to metro lines M1 and M2 at the Deák Ferenc tér stop in the inner city.
From 11:00 p.m.to 1:00 a.m. bus 200E, from 1:00 a.m. to 4:00 a.m. night bus number 900 operates between Budapest Airport Terminal 2 and the South Pest bus garage. It is possible to change to night buses 950 and 950A, operating to the inner city.
Car
The Airport is well accessible by car from any point of Budapest and can be reached in 20-60 minutes from the City by the “High-Speed Road”.
Taxi
Főtaxi, the taxi company with the longest traditions (founded 1913) in Hungary transports passengers between the terminals and Budapest. All cars are equipped with a POS terminal, therefore credit cards are also accepted. Reservations can be made in person at the Főtaxi booths located at the exits at Terminals 2A and 2B. A ride to the city center should typically cost around 6500 Huf (22 Euro).
Car hire
The main car rental companies present at the airport are: Hertz, Sixt, Europcar, Avis and Buchbinder.
Hotels