The airport
How to get there
Near by
London Stansted Airport is a passenger airport with a single runway used by the major European airlines of low-cost carriers. It is located near Stansted Mountfitchet in the District dell'Uttlesford the English county of Essex, about 48 miles away from London. Several airlines, mainly low-cost, have their base at Stansted Airport. It was built in 1942 from the U.S. Army as a military base. After the war, it was transferred to the Air Ministry in 1947 and finally to the British Airports Authority in 1966. The terminal building was designed by Foster Associates and is characterized by a roof "floating" supported by a lattice in inverted pyramid. London Stansted Airport is the third busiest airport in London and serves approximately 18 million passengers per year.
INFORMATION
Management company: Stansted Airport Limited
Address: Bassingbourn Road, Stansted - Essex CM24 1QW - United Kingdom
Telephone no.:  +44 0844 335 1803
Website: www.stanstedairport.com
TECHNICAL DATA
IATA Code: STN
ICAO Code: EGGS
Country code: UK
Flights 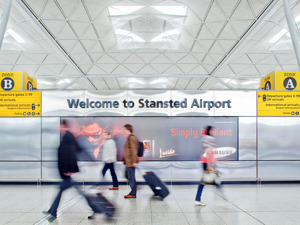 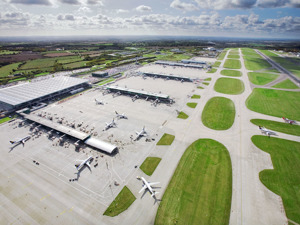 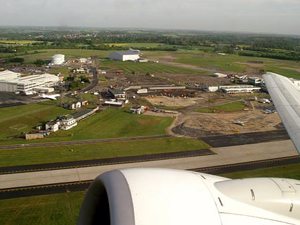 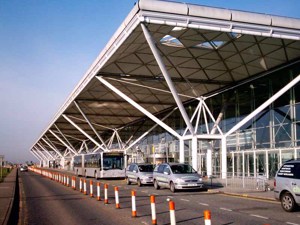 The Metrolink currently runs on six lines out from the city centre towards: Altrincham, Bury, Droylesden, East Didsbury, Eccles and Rochdale. Airport passengers can connect to the Metrolink via rail services between the airport and Manchester Piccadilly and with bus services (Arriva) 18 and 18A to Altrincham.

Near the terminal there is the bus station to London, Cambridge and Oxford. Some stops in the center of London: Liverpool Street, Victoria, Stratford and Baker Street. 'National Express' coaches run up between Heathrow and Stansted Airports. Journey time is approximately 90 minutes. 'National Express' coaches run a regular service between Luton Airport.

London Stansted is conveniently situated just off the M11 motorway - use Junction 8a if approaching the London direction or Junction 8 for the Cambridge side.

Taxis are available to domestic and international arrivals. A taxi to central London for one to four people costs about £99, depending on destination. 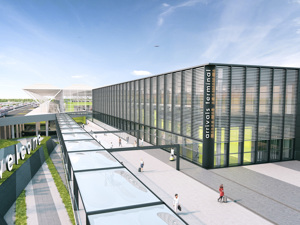